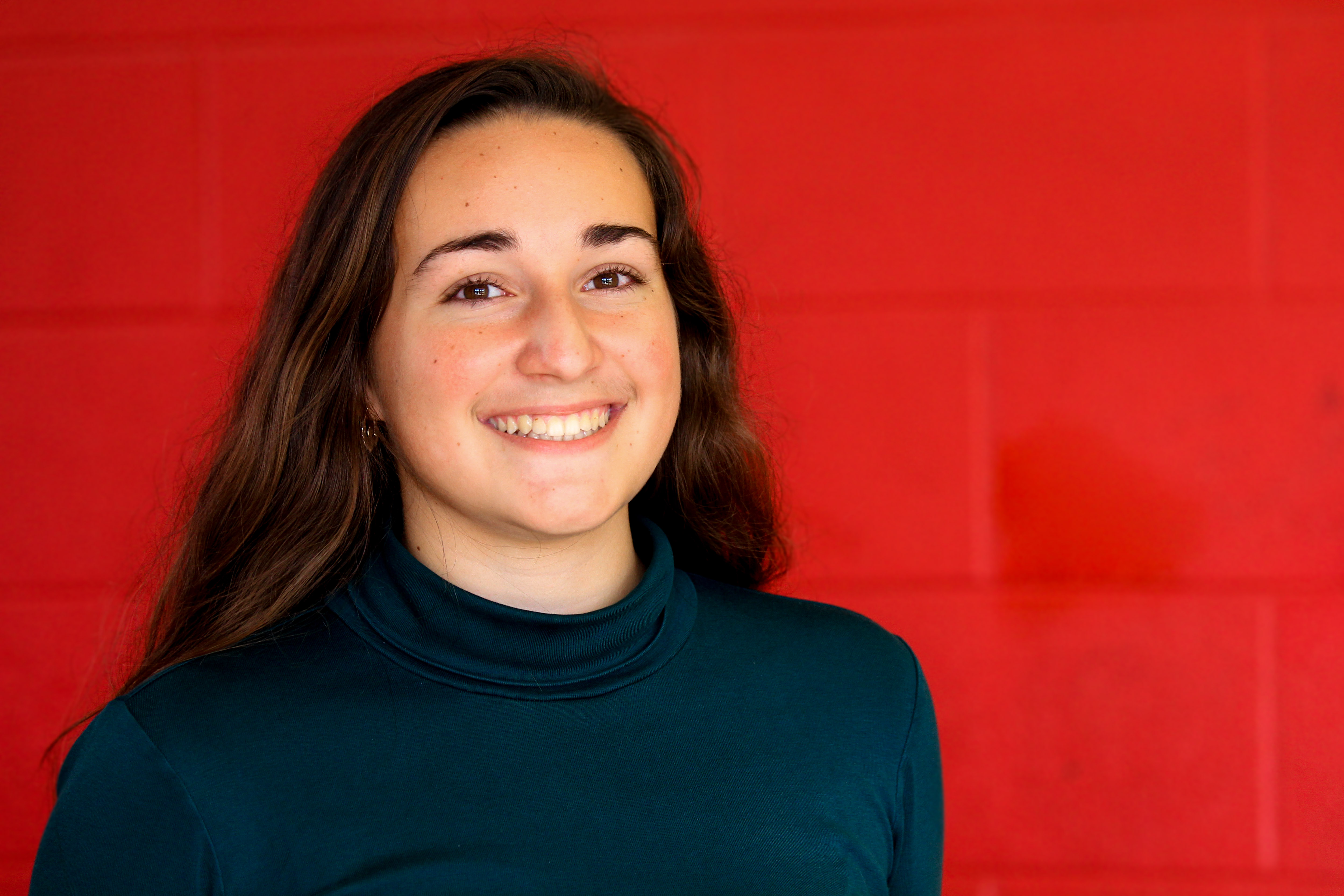 Name: Amalia Chiapperino
Position: Online Managing Editor
Graduation Year: 2016
Hello and welcome to SCO! I'm Amalia, a senior and one of the managing editors. I love to read and spend most of my time outside. Cold weather and rain make me unbelievably happy, and I am a huge fan of history and foreign languages.

Light on prep, but heavy on snack satisfaction, this smoothie has the added bonus of being packed with vitamins and protein thanks to the fruit and yogurt.

The Downtown Silver Spring Plaza and outdoor area will receive a massive renovation, set to be finished in 2016.

All smiles in "Much Ado about Nothing"

Blair theater has delivered another fantastic production in its fall play, "Much Ado About Nothing". With a stellar cast and crew, and a creative twist, the theater department showcased this celebrated Shakespeare comedy in the best possible light.

In response to feedback from school districts participating in this year's Partnership for Assessment of Readiness for College and Careers (PARCC) testing, the PARCC governing board voted on May 20 to cut test length and simplify administrative procedures for the upcoming school year.

The Blair community is mourning the loss of Milton Roth, who recently passed away unexpectedly. Roth, who taught calculus at Blair for over 40 years, brought time, effort and genuine love to work every day, and the suddenness of his loss has been felt by many.

Beaches by Blair to beat the heat

With summer on the horizon and senior beach week just around the corner, here are some summery local beach suggestions that will suit any beachgoer, from the quiet nature seekers to the crowd-loving sun-tanners.

With prom night fast approaching, the endless costs and preparations can seem a bit daunting. Here are some easy tips and ideas for those short on time and money that will guarantee a wonderful evening.

As the year winds down, it's time to make a lot of decisions: which Black-Eyed Susan Book Award nominee you'll be voting for. Silver Chips Online has read, reviewed and ranked the books--so you don't have to.

Sarah Skilton's quirky, raw, and honest debut novel offers an unpolished glimpse into the emotional and physical unraveling of a teenager burdened from a traumatic event.

Director Kenneth Branagh creates a true fairy tale experience with his modernized "Cinderella.” He updates the film from its 1950s animated counterpart by adding depth to what has always been seen as a rather superficial storyline. By focusing on character development, beautiful visual effects and costumes, he proves that he can excel in any film genre.

Despite an intense first half and consistently strong defensive play, Friday's game against BCC (10-10-1) put the Blazers (7-13) out of the playoffs with a final score of 56-41.

Fighting between Ukrainian forces and pro-Russian separatists continues in some areas of Ukraine, despite a ceasefire agreement reached in February.

With the stadium more crowded than ever this season, the Blazers (7-13) readily took on the Wootton Patriots (18-2) on their senior night. Though the Blazers came close to winning after a last-minute comeback, the Patriots were able to surge ahead in the final seconds of the last regular season game, resulting in a final score of 58-55.

In what became a physical and tough-matched game, The Blazers (13-7) struggled to match the Vikings (20-0) in offensive consistency and were unable to secure a win, resulting in a final score of 67-35.

Blair senior and magnet student Michael Winer was one of forty finalists chosen on January 21 out of over 1,800 students to be recognized by the Society for Science and the Public in the Intel Science Talent Search.

For the second time this season, Blair found themselves facing the Richard Montgomery Rockets but unlike their first game, the Blazers came out soundly on top on Tuesday, with a final score of 50-38.

A promising start wasn't enough to keep the Blazers (5-10) in the lead in Friday's game against the Churchill Bulldogs (13-3) that ended with a final score of 37-55.

The chance to grow up bilingual

With the exception of the few immersion programs available in the county, schools are making it more difficult for kids to become proficient in the language they're learning by waiting until middle school to introduce foreign languages into the curriculum.

Tuesday's game became representative of everything the Blazers (7-5) have been striving for all season, as the team stepped up to defeat the Blake Bengals (6-6) by playing tight defense and aggressive offense.

Despite early blunders, the Girls' Basketball team (4-0) found their focus in the second half, mounting a comeback built on intimidating offensive play to narrowly defeat the Springbrook Blue Devils (0-2), by a score of 35-31.

In what became an aggressive, closely-matched game, the Girls' Basketball team (2-0) stepped up their offensive play late to beat the Kennedy Cavaliers (0-1) in their first home game, with a final score of 43-36.

Thanksgiving, one of the few non-religious holidays celebrated by Americans, seems to have fallen prey to this country's obsession with materialism.

In response to national concern about the Ebola virus, Montgomery County Public Schools (MCPS) health staff developed new policies for schools to isolate any potential cases of Ebola among students.

There is nothing more disappointing than a book with potential that falls flat. Unfortunately, prominent teen fiction writer Jennifer Brown's "Thousand Words" does just that.

Humans of Blair: Finding the good in everything

The Montgomery Blair Alumni Association inducted six alumni into the Hall of Fame at the 80th Anniversary celebration and all-class reunion held at the Strathmore Music Center on Sunday.

"Alexander and the Terrible, Horrible, No Good, Very Bad Day," directed by Miguel Artecta, is a sappy and unrealistic children's film about a series of unfortunate and frustrating events that shifts a family's outlook on life.

A school to be proud of

It's time to learn everything you never knew about Blair, from the history of its name, to now-famous alumni who once called Blair their high school.

There are a lot of things to love about Maryland. My favorites are the crabs, the close proximity to D.C, the relatively mild weather and, every October, the Maryland Renaissance Festival

After another week of NFL action, the standings remained pretty much the same. Sam and Bobby are widening the gap between Sasha and our dynamic duo known as Romalia. With Sasha out of town for most of the week, he called upon tech staff all-star Agam Mittal to make his picks for the week and attempt to boost him back up the leaderboard. Let's see how the picks shape out this week.

The Ebola virus currently spreading throughout western Africa has generated over 3,700 suspected and confirmed cases as of Aug 31, making it the largest Ebola outbreak in history.

After a tough week for most of our experts, Sam has regained his lead in the standings he held for many week last week. Sasha is even and Romalia is only two games back from the rest of the pack. This week offers an opportunity once again shake up the standings. Lets see how the experts can do.

After a very surprising week one, our experts are all looking to rebound in week two. Newcomer Bobby Pfefferle has a one game lead on the field. With a frenzy of big time, evenly matched games in line for week two, it should be a great weekend of NFL football, and a struggle for our experts to pick them all.

With the new school year comes a new season of SCO NFL Predictions. Check out our picks and analysis to greatly improve your NFL IQ.

The action film, based on true events, centers on police detective Shivani Shivaji Roy (Rani Mukerji) and her personal vendetta against a human trafficking gang . The premise is fascinating, but Sarkar goes way over-the-top in the script, music and certain plotlines, adding an unnecessary theatrical element to the film.

Poor us: losing the last day of summer vacation

But this year, in addition to all that, they'll also have to deal with something much worse: the wrath of approximately 2,200 teenagers, very annoyed at having to be at school.

Rodger's viral address and the shooting that occurred soon after, reminded America of the lingering sexist tendencies and feelings of entitlement that continue to hinder gender equality and promote violence.

This smoothie is made with fresh berries.

Strawberries, raspberries and blueberries go well together in this smoothie.