Novel overcomes stiffness and melodrama to leave a lasting impression

Sarah Skilton's quirky, raw, and honest debut novel offers an unpolished glimpse into the emotional and physical unraveling of a teenager burdened from a traumatic event. Like many young adult novels these days, "Bruised" has its gag moments, but overall, the refreshing bluntness and realistically flawed characters make it a compelling read.

The story centers on Imogene, a teenaged tae kwon do prodigy with pride and dedication in her abilities and a desire to prove herself. However, when Imogene witnesses a hold-up in a diner, she freezes and is unable to use her martial arts skills to intervene. Afterward police surround and shoot the gunman, she blames herself for his death. Though the police, her parents and friends assure her that there is nothing she could have done, Imogene ignores them and begins to lose faith in her skills, in her tae kwon do and in herself. Suddenly, all of her personal problems seem much bigger, enhanced by the trauma and subsequent guilt. The only person with whom she can find solace is Ricky, a senior at her school and the only other witness to the shooting. Imogene spends most of the novel trying to learn how to patch herself back together, and falls in love with Ricky in the process. 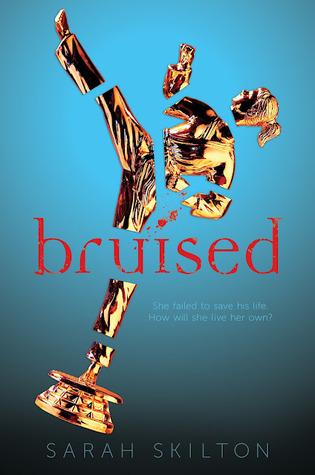 Photo: "Bruised," by Sarah Skilton, has a powerful impact.

Photo: "Bruised," by Sarah Skilton, has a powerful impact. Photo courtesy of Goodreads.

Though her story is heartbreaking, it is fascinating to follow Imogene as her life falls to disarray, thanks to Skilton's fantastic writing. There is no sugar-coating or shielding the reader from the reality of Imogene's pain. Through fights with her parents, shouting matches with Ricky, drunken blunders and academic failures, the reader can relate to Imogene and cheer her on, no matter how much she messes up. And why shouldn't we? She's flawed, but she's also so delightfully human, with a personality that makes her stand out as a young adult literary figure. Fiery, stubborn and honest about her issues, Imogene shines throughout the novel. She's a refreshingly non-stereotypical teenage girl, and this is a refreshingly non-stereotypical teenage book--besides the falling in love part. No character is perfect, and Imogene is a character with depth, true passion and a whole lot of flaws that make her that much more appealing.

Still, "Bruised" is not without its weak spots. A lot of dialogue-filled scenes, especially those with teenage characters, seem unnaturally dramatic and forced, and very unrealistic. Also, though the many emotional scenes are very interesting, there are just too many of them. The arguments, especially those between Imogene and her parents, become repetitive and dull, distracting from other issues.

However, if you can stick through the slow sections and unrealistic dialogue, you will be richly rewarded by Imogene's story as she tries to get herself back on track. It's worth it to find out if she comes out the other side still standing.

"Bruised" by Sarah Skilton is one of the nominees for this year's Black-Eyed Susan Book Award. Silver Chips Online will be reviewing and ranking all of the nominees, so make sure to check back for more reviews.