Characters and cinematography shine to bring this fairy tale to life

Director Kenneth Branagh creates a true fairy tale experience with his modernized "Cinderella.” He updates the film from its 1950s animated counterpart by adding depth to what has always been seen as a rather superficial storyline. By focusing on character development, beautiful visual effects and costumes, he proves that he can excel in any film genre.

Cinderella, however, is not the flimsy, bland character we know from the animated version of the story. This Cinderella has been modernized, in part by James, and is not only fiercely devoted to the values instilled in her by her late mother, but also independent and unbelievably strong. James is an overall delight as Cinderella, balancing a gentle demeanor with a passionate belief system, and is particularly enjoyable to watch in scenes involving her wicked stepmother.

Cate Blanchett makes Lady Tremaine, Cinderella's stepmother, the hands-down most spectacular character of the film. As one of the most prime examples of the measures taken to further develop these well-known characters, Lady Tremaine has a backstory in this version. She previously lost the one true love of her life and the father of her children before marrying Cinderella's father for the financial security she thought it would award her. Blanchett is cold, calculating, and delightfully cruel--able to perfectly portray Lady Tremaine during her most wicked scenes, and also during the scenes where she appears vulnerable and weak. Her icy performance is aided by stellar costumes that give her an old-Hollywood grace and arrogance.

As Cinderella's stepsisters, Sophia McShera and Holliday Grainger are catty and immature, just as they should be. They, along with Bonham Carter, provide snippets of amusing comic relief throughout the film.

Even the prince is a noteworthy character. Starting from practically nothing, seeing as the 1950s-era prince was nameless and appeared in only a small portion of the film, Madden gives him much-needed depth. The prince, known to Cinderella as Kip, is a devoted son, and a kind and respectful man, especially when interacting with Cinderella. Madden's performance is earnest and sincere, and he pairs well with James. 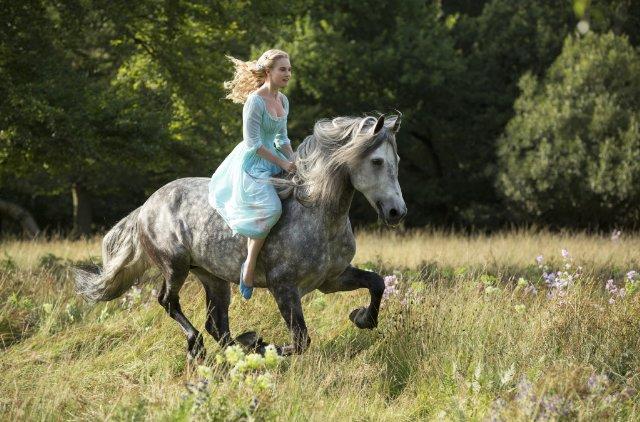 Photo: Lily James stars as Cinderella in this live-action rendition of a classic fairytale

Photo: Lily James stars as Cinderella in this live-action rendition of a classic fairytale Photo courtesy of IMDB.

Though the characters shine in the film, the plot doesn't always have that same spark. There are parts where the story lags a bit, and we are left waiting for things to pick back up. Part of this is due to too much attention paid to detail in many of the branching storylines, and part was probably just the familiarity that many people had with the storyline.

Still, even the more stagnant parts of the film were made better by the sublime special effects and computer-generated imagery. Everything from the costumes to the scenes involving magic seemed to sparkle and the computer generated animals seemed almost lifelike. The effects brought the fairytale aspect to life, making the film truly beautiful

And, as a bonus, a new "Frozen" animated short precedes showings of "Cinderella;” a charming continuation of one of Disney's most beloved recent films. In the new short, Elsa and her friends overcome the numerous obstacles they encounter while preparing for Anna's birthday. The short is guaranteed to produce laughs from all in attendance.

Though the pacing of the film couldn't always keep up with the expectations of the audience, this live action "Cinderella” nevertheless gives the older version a much-need re-vamping. It makes the characters shine, providing for a rewarding happy ending.