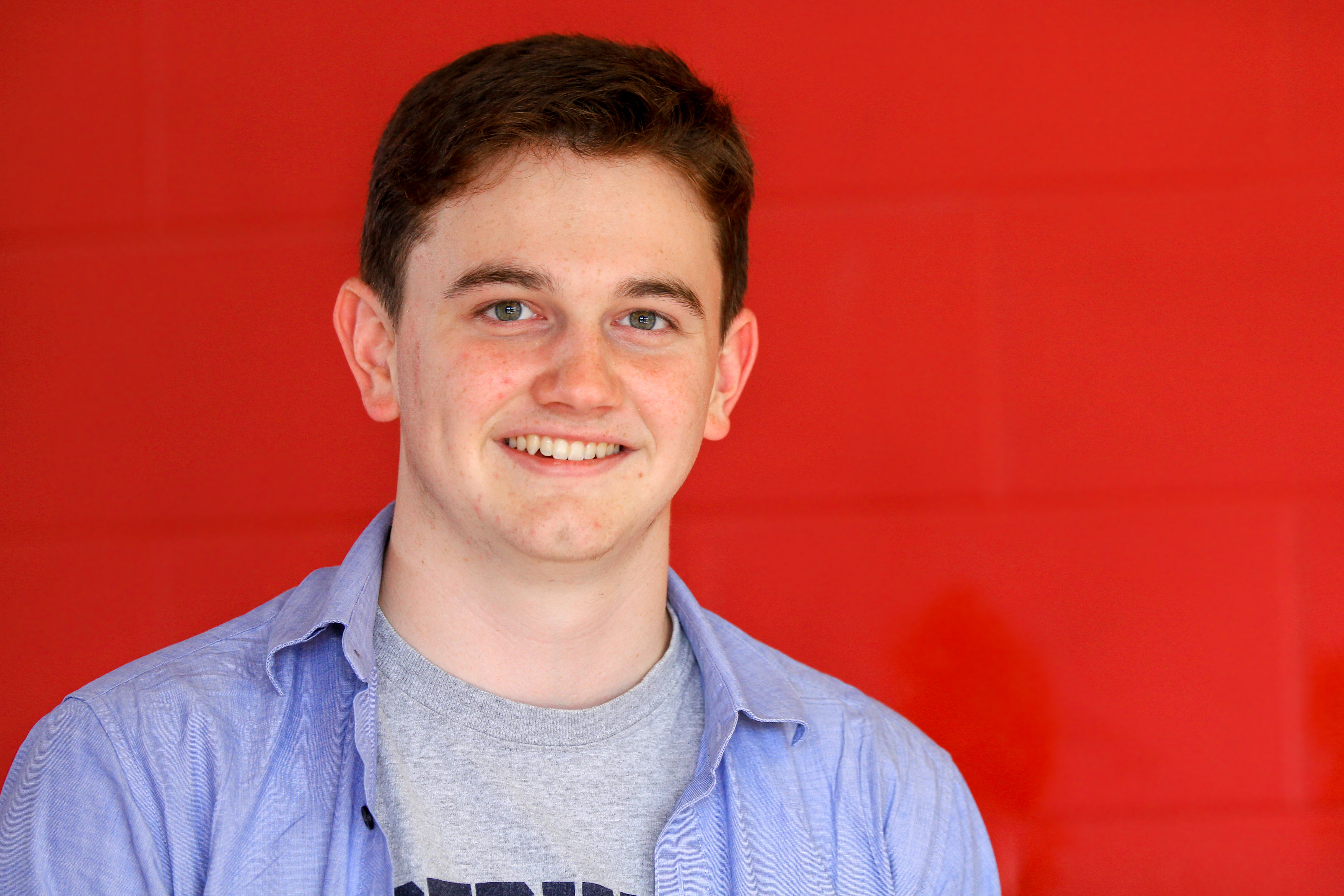 Name: Maximillian Foley-Keene
Position: Online Editor-in-Chief
Graduation Year: 2016
Hello! My name is Max and I'm an Editor in Chief for SCO this year. I like writing about what I think, especially current events, American foreign and economic policy. I also like music (jazz and 2000s post-punk are my favorites), art (Wassily Kandinsky is the man), sports (New England teams) and Netflix (West Wing, How I Met Your Mother, Sherlock and Parks and Recreation). I'm excited to be editing SCO!

Happy Super Tuesday! More states vote today than at any other point in the primary contest. A huge amount of delegates are awarded and candidates who do well on Super Tuesday tend to win the nomination.

Donald Trump and the rise and fall of white nationalism

There's plenty to fear about Donald J. Trump. He's a bully, a sexist and a narcissist. But what's even scarier is the rising movement he represents: white nationalism--a movement defined by white identity and opposed to forces of economic and demographic change.

While not as flashy or entertaining as the GOP campaign, the Democratic primary has been plenty contentious and raises interesting questions about the Democratic Party, liberalism in America and the appeal of pragmatism.

The 2016 presidential campaign has been the most unpredictable and entertaining race in recent memory. In the Republican race, a reality TV star and a senator widely despised in his own party lead in the polls.

Montgomery Blair experienced three security breaches by students who attend other Montgomery County high schools between Oct. 7 and Oct. 12. Two of these breaches led to physical confrontations between the Blazers and the outside students.

Words ringing in your ears

In a community like Blair, one that prides itself on tolerance, how do Blazers relate to the words coming in through their headphones?

The Blair baseball season ended Friday afternoon in a painful 6-3 loss at Gaithersburg High School. Blair struggled against Gaithersburg's pitcher Anthony Felitti, a commit to the University of Virginia.

"Pitch Perfect," a quirky comedy about all-girls a capella group the Barden Bellas, took critics by aca-amazement by becoming one of the biggest hits of 2012, fueling a renaissance of collegiate a capella enthusiasm. Now the Barden Bellas are back, and they're better than ever. "Pitch Perfect 2" is a hilarious and worthy sequel, filled to the brim with gags and female empowerment.

Baseball wallops Whitman to advance in the playoffs

In a dramatic victory Wednesday, Blair baseball defeated Walt Whitman High School 15-4, avenging last year's loss that knocked the Blazers out of the playoffs. After falling behind early in the game, Blair scored twelve runs in the fourth inning to call the mercy rule.

In first playoff game, baseball comes out strong against WJ

On a beautiful night, in front of an energetic crowd, Blair baseball entered the playoffs with a bang. Behind solid pitching, excellent defense and a powerhouse offensive performance, Blair looked unstoppable, beating Walter Johnson High School after the mercy rule was called in the fifth inning with a score 12-1. The Blazers now move on to their second playoff game against Walt Whitman, the team that knocked Blair out of the playoffs last year.

Although the Media Center staff separated its tables by gender for the good intent of creating a more peaceful and learning-conducive environment, the tables lead to gender discrimination and stereotyping.

Everything seemed to come together for Blair baseball on senior night. The last home game of the regular season was rife with strong defensive plays and quality pitching performances, all backed up with strong offensive play. Performing for a packed house of ardent fans, Blair took down Blake High School 6-1, to improve their record to 13-3 on the season.

Blair Varsity baseball won its seventh game in a row Wednesday night, taking down the Wheaton Knights 10-0 to improve to a record of 12-3 on the season. This game comes after Tuesday night's division clinching 5-4 victory at Walt Whitman High School, the team that knocked Blair out of the playoffs last year.

Blair baseball soundly defeated the Magruder Colonels (8-7) Monday night 11-5 to improve to a record of 10-3 on the season. The Blazers rode their momentum to extend their winning streak to five games.

Blair Varsity baseball thoroughly defeated the Richard Montgomery Rockets Thursday night in a 11-1 blowout. The mercy rule was applied in the sixth inning, after Blair acquired a ten-run lead.

Save the planet: Have fewer children

Overpopulation is a critical and under-discussed issue. To address it, humankind needs to undergo a cultural and biological shift. We need to stop having so many children.

This year, Blair Senior Michael Winer won first prize in the Innovation category at the Intel Talent Search Finals. He won $150,000 in prize money for his project about the interaction between phonons and electrons in a crystal.

Blair Baseball (5-2) defeated the Clarksburg Coyotes (3-3) Tuesday in a 4-3 nailbiter, scoring the walk-off run in the eighth inning. Blair relied on solid pitching to keep them in the game and clutch hits to pull ahead after falling behind early. Blair improved to a record of 5-2 for the season with Tuesday's win.

Not everyone stays awake for the same reasons. While some stay up for homework or extracurriculars, others stay up to relax and have fun; and others can't sleep no matter how hard they try.

As MCPS students prepare to vote on the nest Student Member of the Board (SMOB), we should consider the most important issues that will face them. In evaluating our choice for SMOB, we should consider how they will address the achievement gap, PARCC and other standardized testing, and communication between the SMOB and the student body.

Don't walk in the PARCC

Common Core and PARCC will undermine education at Blair, Montgomery County and states across the U.S. In order to prevent such an educational fiasco, Maryland should drop out of the PARCC consortium.

As Blair prepares for the Partnership for Assessment of Readiness for College and Career (PARCC) tests, Blair teachers expressed frustration and anger at a test they view as overly difficult, time-onsuming and representative of educational policies that delegitimize public education.

Flipping the classroom on its head

So how do we make sure that students know 100 percent of the foundation of a subject and 100 percent of all the concepts after? By flipping the lecture-test model of schooling on its head.

In "Annie," the sun is always out

"Annie" is two-dimensional, goofy and very cheesy. This film will not be sweeping at the Academy Awards. But if you're ready to embrace the feel-good silliness and fall into a world in which it really is always better tomorrow, "Annie" is for you. Be ready to sing along.

The rise of the religious left

With a growing community of religious progressives among young people, we may be about to see the political and religious tide turning back toward a message of economic equality and social tolerance.

The greatest editor of his day

On Oct. 21, the journalistic and political world mourned the death of one of its giants. Benjamin Crowninshield Bradlee served as the Washington Post's Editor-in-Chief during the Watergate scandal.

A vote for corruption

If the American people are able to accept knowing less about their political system, the federal government will be able to address pressing issues with more ease.

Midterms debrief: 2014 election results and what they mean

Alumni of Blair: Love and loss at Blair

"The best day of my life was at that Blair basketball game."

BLISS assigns upperclassmen tutors with younger and lower level classes, giving academic assistance to students and an extra hand to teachers. But BLISS accomplishes much more than an academic mission.

The tuition is too darn high

If a college degree is ever going to be a commodity students of all economic statuses can obtain, states and the federal government must end their reliance on college loans and make a renewed investment in student aid programs.

Why the war on terror failed

The blame for this global disrepair can be principally attributed America's failure nation-build in Iraq and Afghanistan by working with the people to create benevolent governments.

"The Giver" of nothing new

Some movies seem to come out at the perfect time, striking a chord with the emotions and experiences of the audience. Other movies come out following the release of a litany of similar films, seeming unoriginal and boring. "The Giver" is that second kind of movie.

The brokenness of American democracy, in one poll

For the first time in the history of the survey, the majority of Americans disapprove of their own Representative.  And the scary thing is that this finding doesn't matter one bit.

A need to lead in the Israel-Palestine conflict

The United States must make a change in its Middle East policy by working to rebuild the broken Palestinian economy and putting pressure on the Israeli regime to work for a lasting two-state solution.

In Syrian war, strength through neutrality

The continuation of Assad's power in Syria brings the country closer to becoming ground zero of an all-out battle between the two major sects of Islam, Shia and Sunni, spanning the entire Middle East.

Jason Campbell and his wife Tawanna Campbell met at a Blair basketball game.