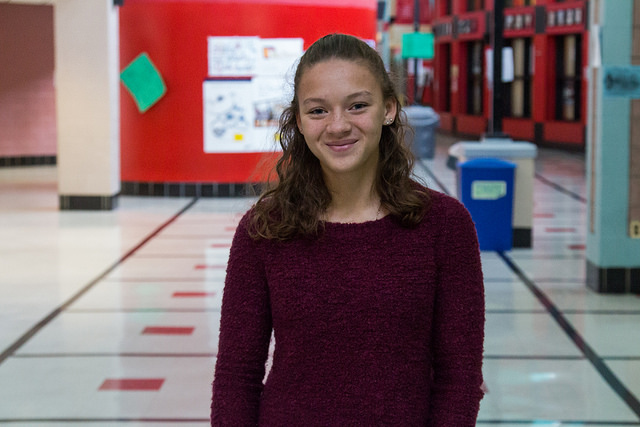 It is that time of year again! The time of year when you have a whole day dedicated exclusively to you. Today is Mother's Day, and oh are we here for it. We have so much to say to you and only one letter to say it all in. But if you'll read nothing else but this opening paragraph, please know that we love you, and we thank you for your never-ending care and support.

D.C. high school under investigation after an allegation of falsifying records

On Nov. 28, a report revealed that Ballou High School in Southeast D.C. was graduating students who had not met all graduation requirements.

Technology tries to put an end to stranger danger

Tinder, Uber and other services that rely on the trust of strangers are changing the way people interact online. Technology is making it easier and faster to meet, talk to, and work with strangers. But is it safe?

Students who are almost legal adults have little real freedom in high school, and this should change. Students deserve a more liberal arts-style curriculum, one that can give students some educational freedom.

Mary Beth Tinker spoke in the auditorium during fifth and sixth lunches on Feb. 22. She was invited to speak to by OneBlair, a student run activist group, about her famous free speech case, Tinker v. Des Moines and what it means to her to be able to have the same rights in and out of the classroom.

Doughnuts can be too sweet, too messy, and too oily. But, I've decided to be gracious and give doughnuts a chance.

Blazers say yes to competing at the next level

On Nov. 15 senior Madison Waechter committed to the University of Wisconsin-Madison and signed the letter of intent to officially join their swim team. Waechter finally made the decision to commit after considering offers from three different schools. "I loved everything about the school: the academics, the location and the swim team had a great atmosphere," she said.

Volunteer to beat the cold

Even though the holidays are over, it's important to carry on with those feelings of family, of love and of giving back. It's time to help someone else, whether it be through monetary donations or hard work, by planting a new tree or handing someone a bowl of hot food.

As the proud new owner of Asha Gomez's new cookbook, My Two Souths, I'd thought I'd try out one of her new recipes!

A common misconception about Blair is that it's easy to get lost traversing the halls because of the school's size. What really makes it hard to find your way is that all the classrooms look the same. Imagine if each room had its own unique decor or theme, making them easy to distinguish not just by the number on the door, but by what it actually looks like.

Give your holidays some pizzazz with this red, white and green bread

This week on SCO Yummy, we're talking all about bread.

Whether as a player on the field or a spectator in the stands, being on a winning team is a fantastic feeling. The players give it their all, the spectators yell and cheer, the parents hold their breath and the clock winds down. Then it's over. The buzzer goes off and all that exciting energy is dispersed over the crowd as people cheer and hug, and players and coaches alike high five and celebrate.

The activist power of TV

The national conversation about how to fix the racism, sexism and homophobia in our nation is an ongoing debate and over the past couple of decades, the people of Hollywood, the ones who "make the big bucks," and producers of popular TV shows, have joined the conversation.

A warm start to a new food blog

Silver Chips Online can now officially be your first stop for all things food.

Blair boys' cross country (5-1) and Blair girls' cross country (6-0) both had exciting seasons this fall. Before the season started, Blair learned that they would no longer have any home meets.

A day in the life of Blair's principal

Ms. Renay Johnson is the principal of Blair, but her daily activities are something of a mystery for Blair's Blazers. What really goes into a day in the life of Blair's principal?

The Blair Blazers (7-2-1) lost a hard fought game against the Whitman Vikings (8-2-1) 2-0 on Tuesday night. Both teams remained strong defensively, but Blair struggled to gain momentum in the attacking half.

A sweet start to summer

Summer came pretty unannounced this year. One day it was windy and 55 degrees, and the next, it was 85 with the sun beaming down shamelessly. Blazers are going to need something to help them cool down as the weather get hotter and the days get longer this summer.

Final product of my Pan Bianca