How to make hoecakes

You know how sometimes you get that urge to buy something even though you really don't need it, but then, it's in your Amazon cart and before you can stop yourself you've pressed "Place Order"? Well, I am quite familiar with this predicament. I am the now the proud owner of a brand new cookbook, My Two Souths.

It all started when I read an article about 2016's best cookbooks. There was one book that caught my eye, maybe it was because it was featured in the front of the picture or maybe it was because My Two Souths just sounded like such an interesting concept. The author had found a way to mix her indian and southern sides into one beautiful cookbook. Either way before I knew it I had clicked the link, which had sent me to Amazon, and I had placed my order. 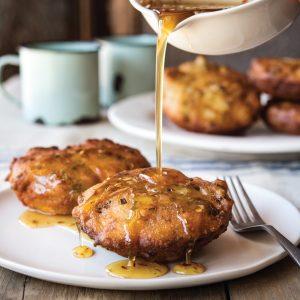 Today on SCO Yummy, in an effort to not have bought this cookbook in vain, I will be cooking puffy ginger hoecakes from My Two Souths by Asha Gomez. When deciding which recipe to cook from Gomez's arsenal of over 125 recipes, it was difficult to choose what I wanted to concoct in my kitchen. But, when I noticed the funny name of "hoecakes", I couldn't imagine making anything else. But the picture sealed the deal. They looked like fried beignets with honey poured over them.

Gomez says that she brought together traditional southern hoecakes with something she grew up eating, uttapam, which is a sort of rice pancake with ginger and shallots. Although it looks sweet, it is actually a savory food because there's very little sugar in it.

The list of things I've fried in my life is very short. It includes fried chicken and funnel cake, and that's about it. Hot oil is scary. But, once I got over my fear of burning myself, I got right to work.The instructions were very easy; all I had to do was combine all the ingredients, heat the oil, drop spoonfuls of the mixture into the oil, and then dry them when I was done. Honestly, it was a lot of fun. It was just like making donuts!

Directions:
In a bowl, combine all the ingredients except the oil, thoroughly.

I used olive oil instead of canola oil because we didn't have any canola oil in the house and because it fries with a better nutritional value than canola.

Heat the oil in a medium pan (large if you're afraid of the oil splattering, like me) using medium heat. To know when the oil is hot enough, dip your fingertips in water and flick it onto the oil, if it sizzles, it's ready. Take a spoon of the batter and carefully place it into the oil. Fry it on each side for about 3 minutes or until golden brown. Make sure to only flip once or you will mess up the shape.

When hoecakes are done, place them on a plate lined with newspaper and pat the excess oil off of them. Serve warm!

These were delicious, as long as you patted off excess oil. They were exactly like I imagined savory donuts to taste like. I would definitely make this with soup, sauce or something warm because they can be a tad dry by themselves. It was so easy and I'd make them again in a heartbeat.

Besides the great name these hoecakes were a big hit and if you ever need small finger food appetizers I strongly suggest making these with a little dipping sauce.

Next time on SCO Yummy, I will be tackling leftovers in the form of fried rice!