The Maryland Board of Public Works approved the Purple line contract on April 6, thereby green-lighting construction. The venture is estimated at $5.6 billion and should begin operating in 2022. The new Purple line is a 16 mile line that will extend from Bethesda in Montgomery County to New Carrollton in Prince George's county. 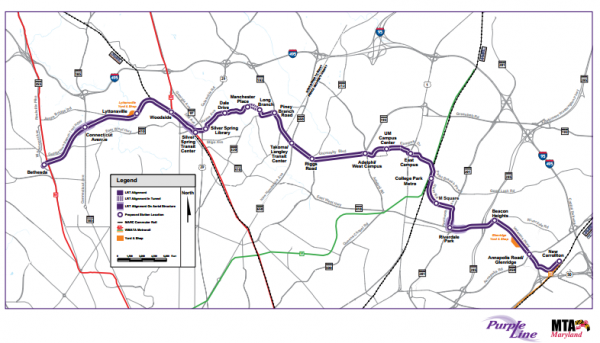 Photo: The Maryland Board of Public Works approved the Purple line contract.

The Maryland Board of Public Works approved the Purple line contract. Photo courtesy of WTOP.

The Board of Public Works, consisting of Governor Larry Hogan, State Treasurer Nancy K. Kopp (D) and Comptroller Peter Franchot (D), unanimously approved the contract with the intention of revitalizing the suburbs and attracting commerce. The new Purple line trains will be shorter than Metro trains, will carry a maximum of 301 passengers and will travel at a slower speed. They will run above ground on separate tracks on both county's streets.

This above ground plan has raised concern about disturbance among many Silver Spring residents. "The lanes may interrupt my normal driving route," Silver Spring resident Johny Sozi said, who also teaches Marketing and Study Hall at Blair. "I hope it does not cause a large noise issue in my neighborhood." In addition, there has been an environmental concern that the line will destroy the wooded Georgetown Branch recreational trail between Bethesda and Silver Spring, while other opponents say it will also bring unwanted development and new traffic to neighborhoods.

There are 21 proposed stations in total on the line, with several stops in Silver Spring including at the Silver Spring Library and Silver Spring Transit Center. Construction of the rail is expected to make transportation to and throughout the University of Maryland College Park more efficient. "I swim at University of Maryland four days a week so this would be nice," sophomore Olivia Gonzalez said. "So many events occur at the school and this makes it easier for students to get there." There will be five stations on the UMDCP campus where students and faculty will be allowed to ride for free. It will also make travelling via Metro to and from Bethesda and Silver Spring shorter in duration by creating a direct connection rather than passing through D.C.

Metro's Red, Green and Orange lines as well as to the MARC and Amtrak lines will also be connected to the Purple Line.