The other side of Friday night lights

Drum major and senior Nicholas Banks stands under the Friday night lights in a crisp red and white uniform, awaiting his cue as the Blair receiver nears the end zone. Touchdown! With a wave of Banks' hand, the Blair marching band bursts out into the Blair fight song. Banks moves his arms with incredible eloquence and ease, guiding each member of the band and each note into correct formation. As the Blazer anthem permeates through the chilled evening air, it melts into the cheers of the enthusiastic crowd, the warrior-like chanting of the cheerleaders and the noise of ruffling pom poms, forming an exhilarating medley of sounds that underscore the intense atmosphere driving the football team forward. It is this symphony of people in the stands and on the sidelines that truly complete the Blair football experience.

For two weeks before the school year starts, the Blair marching band attends Band Camp to acclimate the freshmen to the group and plan their halftime show. When school starts, the band meets Tuesdays and Thursdays to practice, working hard to perfect their halftime show routine. Senior Chris Jones serves as the marching instructor at band camp, a position that requires him to prepare all the members for the coming season. His main job is teaching members how to march, an elaborate process in and of itself. "We use sets and diagrams of where we are supposed to be located," Jones says. "We practice each individual segment of our routine and then put it together." 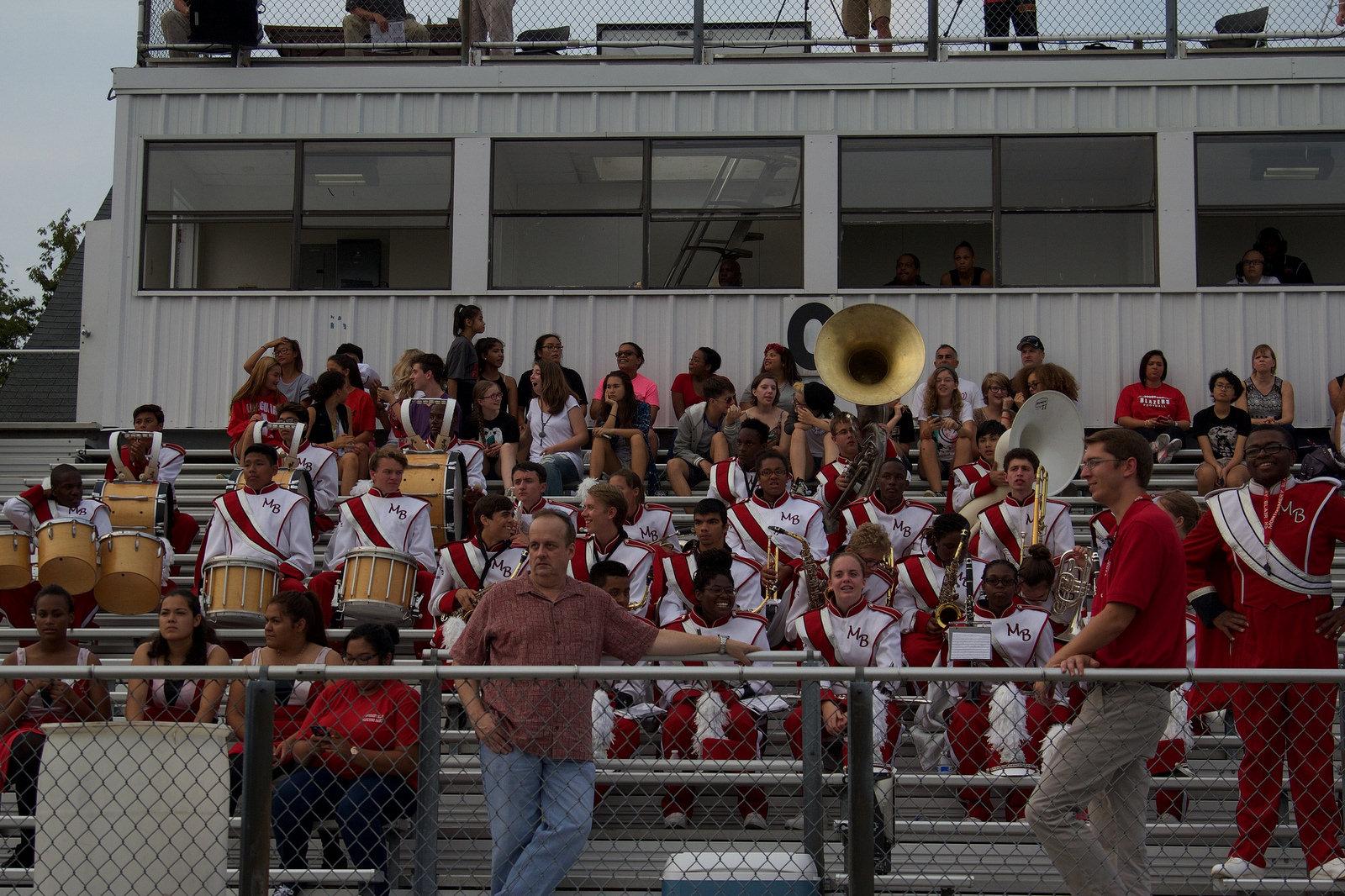 Each year, a new theme is chosen for the halftime show. Last year's theme was Disney songs, while this year is featuring songs from the Harry Potter movies. The band also plays the Jaws theme song to build suspense before a kick and the Blair fight song after each touch down, as well as crowd favorites like "Jump On it". As drum major, Banks is in charge of conducting the band and ensuring everyone stays in time while playing music. "Every second counts and we need to get as much accomplished as possible each time we meet," Banks asserts. "Each member is a crucial piece of the marching band. In the words of our Director Raife Oldham, "Every member is a first string.”

As the Blair marching band blares their instruments on the turf during half-time, the Color Guard parades in front in shimmery uniforms, swinging their flags with precise, graceful motions. Senior Carolina Fuentes, Color Guard Captain, works in tandem with an instructor to choreograph and teach the eight other girls on the team. 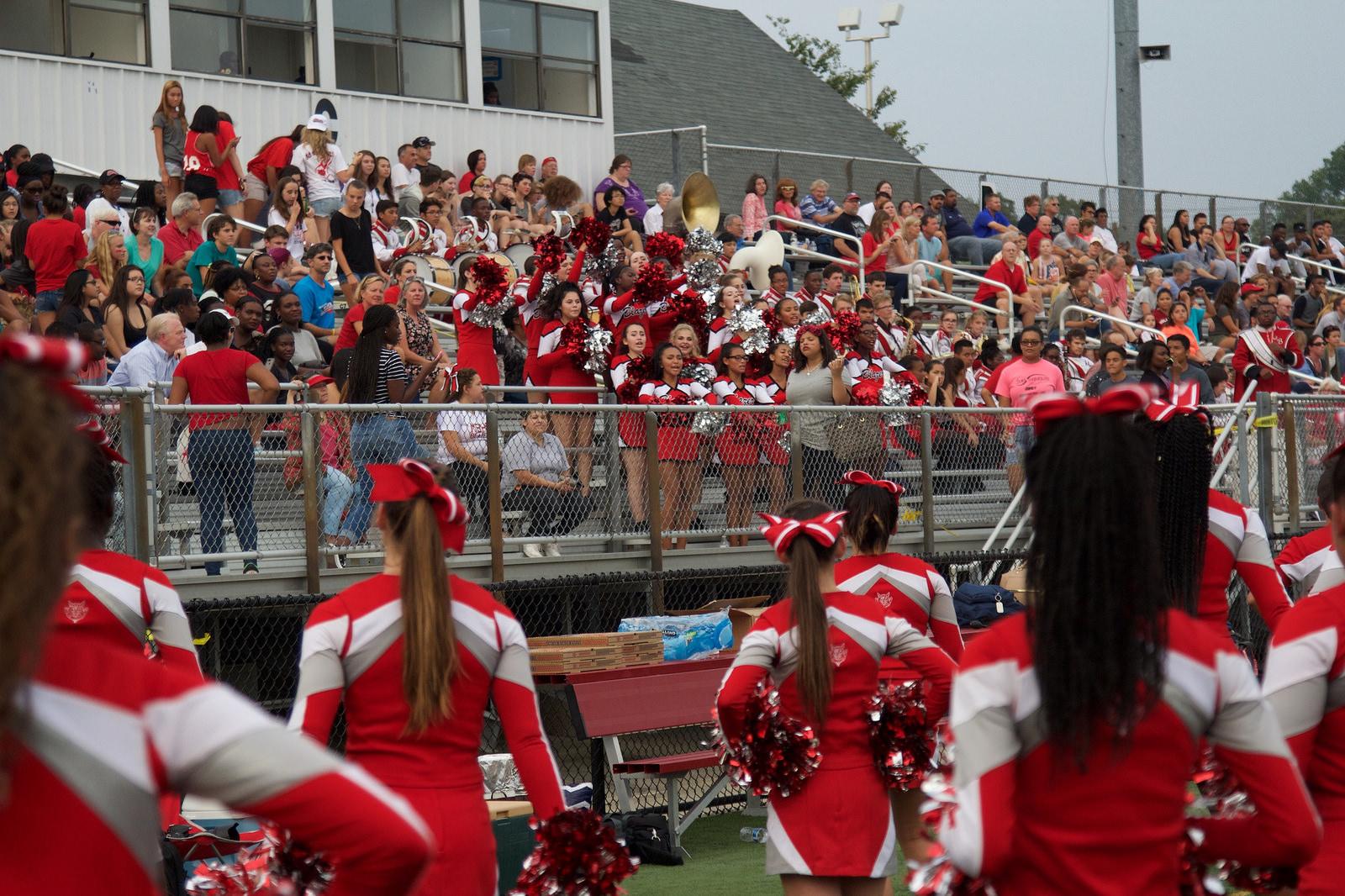 Photo: The people on the sidelines are a critical part of the Blair football experience.

The people on the sidelines are a critical part of the Blair football experience. Photo courtesy of Nicholas Fechner-Mills.

"Our job essentially is to make the band look pretty and add some more movement to the show," Fuentes says. "Sometimes we include dance elements." According to Fuentes, the routines involve immense coordination and attention to detail. "We always have to make sure we are in step with the band while they march and we must always face front, all while twirling the flag." Feuntes says. The amount of work and consideration placed into each part of the band and Color Guard pay off the moment they step on the turf. "There is a lot of pressure to make sure everything goes well," Jones says, "but it's super fun hearing the cheers from the crowd and receiving the cues to play different songs and jam." Fuentes agrees. "It's an adrenaline rush. But we get to be in the field, while most people are in the stands," she adds.

The cheer team never ceases to amaze with their high-soaring stunts and magnificent acrobatics. The flyers stand one-legged in pyramid formation, raising signs in the air reading "Red" and "White", the crowd calling out with each flip of the sign. Senior Fridaous Djobo is co-captain of the team and is responsible for choreographing the dance elements of their routines and keeping the team upbeat.

Memorizing new routines and cheers requires the team to practice for hours each day. According to Djobo, however, performing in front of crowd is an entirely different experience, "Doing brand new stunts is nerve wracking because there is a higher chance of mistake," Djobo says. "If we mess up the important thing to do is to make sure everyone is safe and to learn." A part of the cheer team's job is also to interact with crowd, which for Djobo is one of the most exciting parts of Football games. "The student section is amazing and the cheer with us," Djobo gushes. "It makes it so much more fun."

As the football team retires to the locker rooms during half time, the poms team prances onto the field with high-kicks hoping to reenergize the crowd for the next half. They dazzle the crowd with stunningly choreographed, perfectly synchronized dance routines. Senior and captain Elizabeth Quinteros along with her co-captains create a dance routine to be practiced 3 days each week. Before each game, the team meets to rehearse and do each other's hair and makeup. As captain, Quinteros gives a pep talk to ease the nerves of her teammates as they prepare to step onto the turf. "We try to go out more excited than nervous," Quinteros says. "Once we are out there preforming you can feel so much adrenaline and energy." The songs for routines are specially selected to hype the crowd and feature music from genres such as EDM, Hip-hop and POP. "We like songs people know about because it helps get the crowd as hyped as possible," Quinteros laughs.

The marching band, cheer and poms have one major thing in common: the relationships sprung from the close knit teams. Feuntes was so close with her fellow Color Guard members that she went to prom as a sophomore with seniors. The marching band had a Harry Potter marathon in spirit of their half-time theme this year. Poms and cheer have resulted in friendships that have transcended the 2 hour practice periods. "The nice thing about being on any team is the relationships you build," Quinteros states. It is these three teams that are the heart of Blazer spirit, that keep the crowd pulsing and the football team alive, even when they may be down in points.