During the 2014 VMAs, Miley Cyrus once again caused a stir; however, not with a raunchy and controversial performance like the previous year. This time, Cyrus used her fame for philanthropic reasons disguised as just another publicity stunt.

After Jimmy Fallon announced that Cyrus had won the video of the year for her song "Wrecking Ball," she guided Jesse Helt, a 22-year-old homeless man to the stage. Helt accepted the award in place of Cyrus and on behalf of the 1.6 million runaways and homeless youths in the United States. As Helt delivered a passionate speech on the situation of the homeless youth population in LA, Cyrus looked on proudly, with contrived tears and sighs. 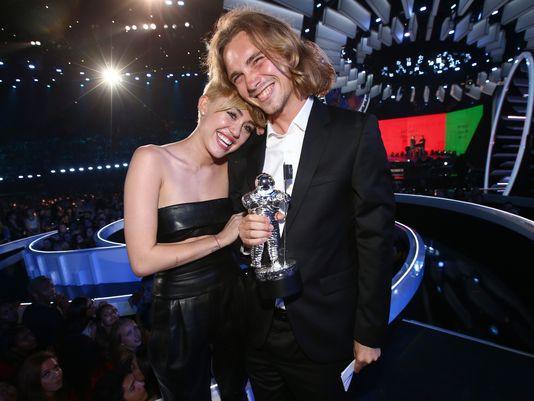 Photo: Miley Cyrus, and her date, Jesse Helt, at the VMAs.

Miley Cyrus, and her date, Jesse Helt, at the VMAs. Photo courtesy of MTV.

In his conclusion, Helt urged viewers to go on Cyrus's Facebook page and join the cause as a perplexed and shocked audience listened on. Helt, however, turned himself in Monday.
Cyrus and Helt met at Friend's Place, a non-profit organization that provides shelter, health, education, employment and therapeutic services to homeless youth. Cyrus's stunt has raised over $200,000 for the organization.

Following the VMAs, however, Helt attracted more attention, for the wrong reasons. The Polk County, Oregon Police wanted Helt for an outstanding warrant for his arrest. In 2010, Helt pleaded guilty to criminal trespass and mischief, and spent three weeks in jail. He violated his probation twice in 2011 and was threatened with jail time if he did not report to his probation officer. He failed to do so, and now has an outstanding warrant for his arrest.

The events from Miley's actions caused buzz throughout the Twitter sphere, as some people are praising Miley for using her fame to spread awareness, while others believe what she did was simply a publicity stunt. Junior Colby Johnson was unsure of what to think during Miley's VMA stunt. "I was really caught off guard. I was like, 'Is this a publicity stunt or from her heart?'" Others such as sophomore Alison Mackenzie believe Miley's actions were genuine. "I thought it was a good way to use the award show to bring awareness. She seemed sincere," Mackenzie said. Whether you believe her actions were heartfelt or disingenuous, one thing is for sure: Miley certainly has a way of stealing the show at the VMAs.