Living in the liberal bubble

Blair's echo chamber can be heard for miles

Welcome to the bubble; where Donald Trump can't touch us. This is a safe space, a place where open-mindedness and inclusivity comes at the cost of ignorance towards any and all alternative world views. Not even the electoral college is allowed inside.

"Saturday Night Live" jokes about liberal elites and their denial of the results of the recent presidential election in a skit called The Bubble. The skit introduces a new place for liberals to live: a clear plastic dome where they can keep to themselves. It is a place where used bookstores are celebrated, hybrid cars are widely used and the money is emblazoned with the face of Democratic primary candidate Bernie Sanders. "The Bubble is a planned community of like-minded freethinkers... and no one else," one man announces in the video. "The Bubble" is essentially where we live. 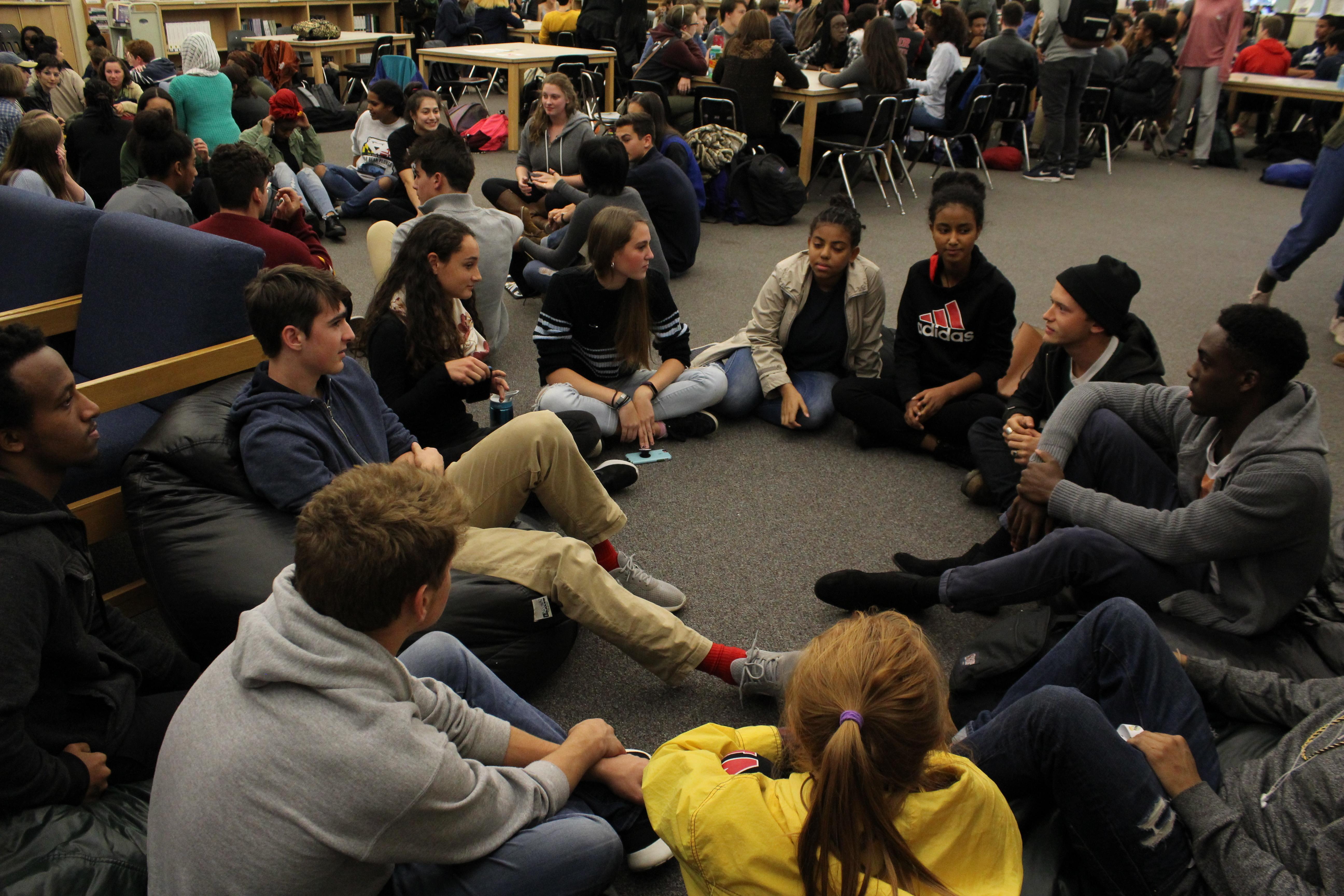 Photo: Blair tends to be part of a liberal bubble.

Photo: Blair tends to be part of a liberal bubble.

The day after Nov. 7, the atmosphere at Blair shifted. Here, the unthinkable had happened; Donald Trump was elected president. Many in the country knew exactly what was coming, but it came as a shock for us. From inside the bubble, this was never possible. Montgomery County voted 74.72 percent for Clinton-Kaine. When Trump won 306 electoral votes from the country, the bubble shattered.

Before the election, "TRUMP" signs were a rarity and conservatives were hard to come by. We knew what was happening down south and in the Midwest, but it was easier to just ignore. Students were visibly upset and the halls were unnaturally quiet. There were hugs and tears. Students exchanged looks of solidarity and sympathy. Counselors were available in the library to provide help for any students that wanted it. But just across county lines and state lines, students cheered at the news. They ran through the halls with bright blue "TRUMP" shirts and striking red "Make America Great Again" baseball caps. The election did not come as a surprise to any of them, as it did to us.

Blazers believe it's not that there aren't conservatives at Blair, but that they are afraid to speak out. With a school of 2882 students, it only makes sense that the body is made up of both liberal minded and conservative students. Senior Fatoumata Sy considers herself a liberal, but wants to have a conversation with someone who thinks differently than her. She wants conservative students to feel free to speak their minds, just as she does. "Honestly, I don't even know that many conservative viewpoints. I'd love to talk with a conservative and know what they are feeling and thinking. I want to know how they feel and what their opinion is," Sy explains.

The key to popping the bubble is discussion. It's not about agreement, it's about listening. Hundreds of students walked out on Nov. 14 in protest of Trump's win and his ideology. The protest was their form of expression. They let the world know how they were feeling. Senior Gabriel Field believes that conservatives and Republicans should be allowed that sort of representation here, as well. "I think a tolerance or some sort of purposeful representation of all views is necessary. We're just in an echo chamber now. We're not making progress, we're just agreeing with each other and polarizing ourselves more," Field says passionately.

Progressives can be seen as narrow-minded, even with such open-minded views. The cultural and commercial habits of liberals are not too different from those of a conservative. Each side of the political divide in America refuses to legitimize the other's claims, leading to a political standstill. It is important to be united. It is important to consider everyone's viewpoints. "Liberals should and can be more open minded to conservative viewpoints. But, everyone has their line that they will not tolerate as well, which I think is okay, too," Sy believes.

One should not parade themselves as an open-minded liberal without giving their opponents the same treatment that they demand through their protests- a chance to be heard. Republicans and Democrats occupy two separate countries. Trump has been elected to lead both of these countries, and this bubble is a part of that. Trump America is real. We cannot close our "open-minded" selves in a bubble. We must pop the bubble and come together in unity. "Living in a place where most people share the same views, it's really easy to ignore other views. But, that isn't an accurate representation of what the world is really like," Field asserts.

Maniza Habib. Hi! My name is Maniza and I'm the 2016-17 managing and news editor! My favorite color is black because it looks good on everyone and I love to dance because anybody can! Also, babies are my favorite kind of people and I love watching The … More »