Richard Linklater's "Boyhood" breathes life into the genre of coming to age films that has been exhausted on movie screens for decades. The film unfolds in real time, and serves as a time capsule that not only captures the growth of the film's characters, but the world around us.

Linklater's choice to film in real time captures not only the emotional transformation of the characters, but their physical aging, without relying on implausible look-alikes. This adds more depth and believability to the film. The audience watches the onscreen aging of established stars such as Patricia Arquette and Ethan Hawke. In the film, Arquette flawlessly takes on the role of Mason's mother, by portraying the struggles and triumphs of motherhood. Hawke also perfectly embodies the role as Mason Sr., Mason's father who transforms into a responsible and invested parent. The audience also watches Samantha grow up several steps ahead of Mason as she goes from a bossy and precocious 8 year old to a grungy college student.

The entire film centers on change and time, and captures the drastic change in the world over the last 12 years. The film incorporates footage from the Iraq war and even features a scene showing Mason and his sister working on Obama's 2008 campaign on behalf of their father. Before our eyes we can see technology transition from Gameboys and boxy televisions to Wii consoles and text message to iPhones and MacBook pros. The soundtrack of the film also counts down the hits of the past twelve years, from Coldplay's "Yellow" to Gotye's "Somebody that I Used to Know" and later Arcade Fire's "Deep Blue," adding to the film's genuine depiction of elapsed time. 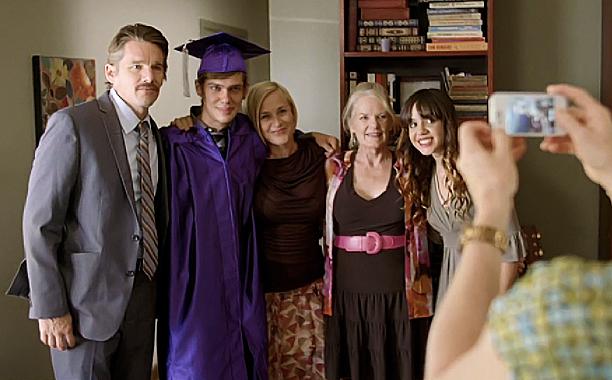 Photo: Mason (Ellar Coltrane) encounters many milestones throughout the movie including his high school graduation

Mason (Ellar Coltrane) encounters many milestones throughout the movie including his high school graduation Photo courtesy of Entertainment Weekly.

Writer and director Richard Linklater's film experiment is groundbreaking. He has taken the "relatable" and tired "coming of age plots" and transcended the routine by tracking the characters and world real time. Despite the large amount of time the film covers, Linklater marvelously takes a decade of footage and condenses it into a seamless production in a mesmerizing three hours.

Near the end of his film, Mason subtly asks his father what the purpose of life is and what people are meant to do. His father replies that we are all just "winging it." This film is perfect for anyone just "winging it" as we journey from one moment in our lives to another.

Boyhood is rated R for language and some sexual content and is now playing in select theaters.