Black Mirror, produced by Netflix, has been gaining a large following throughout the world ever since the first episodes began broadcasting on England's Channel 4 in 2011. Now on Netflix, Charlie Bookers' Sci-Fi anthology returned for a fourth season, comprising of six independent episodes that can be watched in any order.

While the episode running time varies, from 40 minutes to the longest of about 85, each can be viewed as a mini movie that boldy lays out its own premise of a technological innovation gone wrong in the not-so-distant future. It is difficult to have a discussion about this show without revealing what makes each season successful – so many of the storylines woven in a way that confuses viewers and yanks away the curtain at the last minute. Even a hint of a plot spoiler would ruin the fun.

With that said, here is a summary and review of every episode, in the order they appear on Netflix. This contains spoilers. You have been warned.

Episode 1: USS Callister
The first episode of season 4 is arguably one of the best. Not only does it tell a great story with a twist, but it brings in some big stars, including Jesse Plemons (Friday Night Lights, Breaking Bad) and Cristin Milioti (How I Met Your Mother). The episode, which pays homage to Star Trek with a hyper-stylized, Star Trek-ish world where Plemons plays Robert Daly, the Kirk-like captain of a starship. In actuality, Daly is a reclusive tech CTO working on a kind of ultra-immersive virtual reality (VR). He's routinely abused and ignored by coworkers to the point where he's made his own, private version of the simulation where he gets to boss around all the people that crap on him at work. It gets darker when it is revealed that the office workers animated into this simulation are in fact fully-sentient digital copies of their real-life counterparts. They were spawned illegally by Plemons character, who stole their DNA, and are complete with agency and memories, and knowledgeable of the fact they are trapped in this simulation by an "a**hole god." It can be debated if this is on par with some of the other great episodes of the show, but it is easily one of the best in season 4, and it fully captures the "Black Mirror" magic. 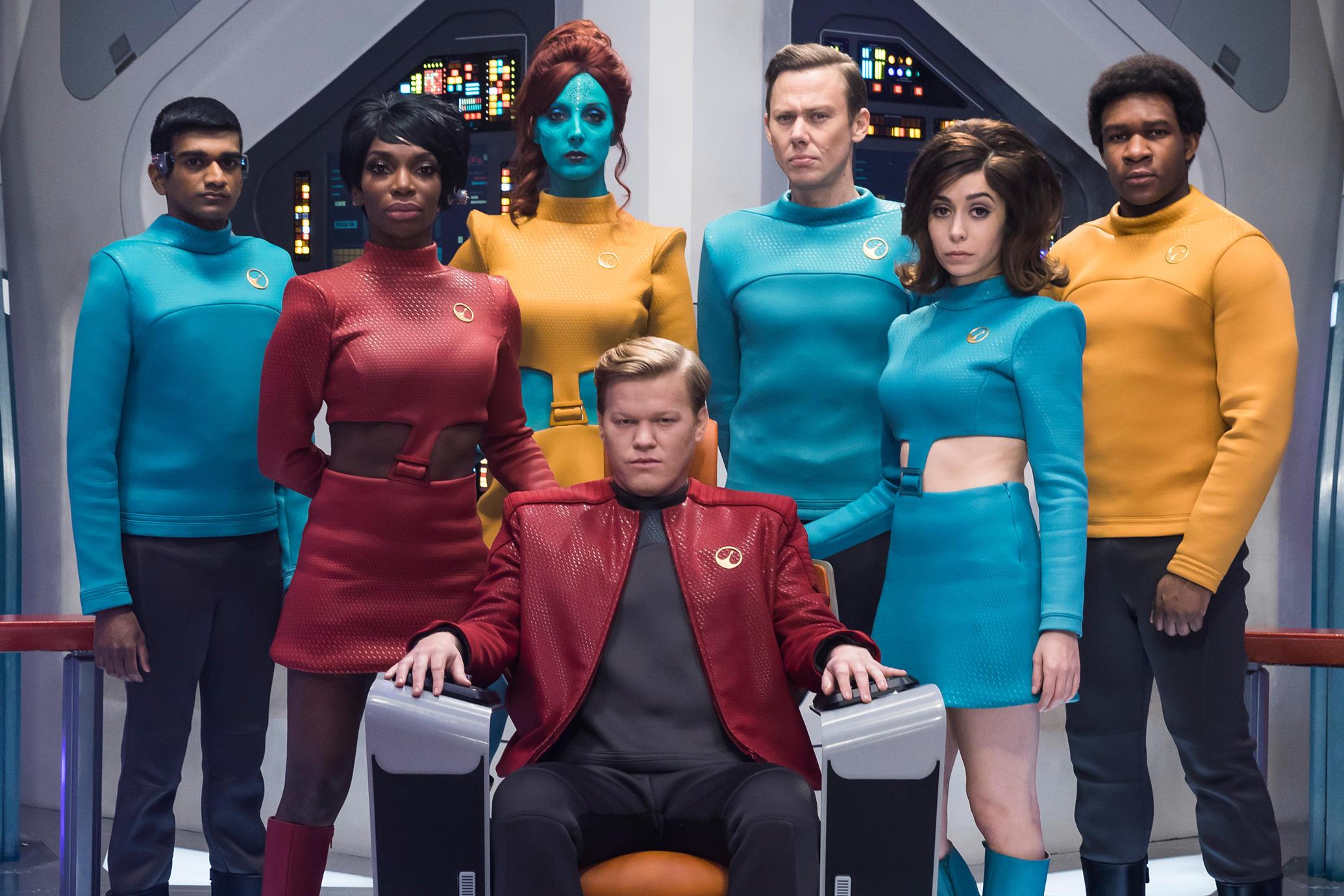 Photo: The crew of the USS Callister of the first episode of season 4

The crew of the USS Callister of the first episode of season 4  Photo courtesy of TV Guide.

Episode 2: Arkangel
This episode, directed by Jodie Foster, is likeable because its premise is not just inventing technology for some twisted purpose. This is one that anyone could see existing, and being used by mankind with good intentions, only of course, for Foster to show how miserably it can fail. The tech created in this world is "Arkangel," a child tracking system that allows for parents to see their child's physical location and vital signs, as well as actually seeing through their eyes. The implant also has a filter, which can dull and blur stressful content to protect children's minds. This is helpful when Susie runs away from the playground or is scared of a big dog, but becomes a problem when her grandfather has a stroke and it blocks him out so she doesn't know to call for help. The mother scraps the system, until her child is a teenager and starts to lie to her and stay out with her friends. She then sees her daughter having sex and follows it up by finding and threatening the boy involved. As the episode spirals out of control from there, it is clear that Arkangel is a good representation of the best intentions going horribly wrong and alienating a child from the mother who was just trying so desperately to help.

Episode 3: Crocodile
This is one of the bleakest episodes the show has ever made, which at its best is a breathlessly tense horror show that never relents, but at its worst moments, as has happened before in previous episodes, favors the absolute worst scenario over subtlety and showcases the absolute worst of human nature instead of leaving the resolution up to the audience to determine. A woman is confronted by a man from her past (she has since married and had a child) who wants to make amends with the family of a biker he accidentally killed in a car accident that they covered up. She kills him, as the story could doom her career, but right after she kills him, she looks out her window to witness an automated pizza delivery vehicle hit a pedestrian in the street. An insurance agent is trying to piece together the accident to see if the person injured can receive any compensation, so she uses a memory-recaller that is used by police, and more recently, people like her. Forced by the law to come forward as a witness, the woman inadvertently reveals the murder to the insurance agent. She promptly murders the agent, and her husband, who knew where his wife was going. The dark twists at the end are a bit overkill, so despite being well acted by the major characters, this episode falls a bit short of the rest of its season 4 companions.

Episode 4: Hang the DJ
Taking a jab at modern dating websites and apps, the two main characters in "Hang the DJ" are living in a little walled in world where a machine matches people in timed relationships that can span from 12 hours to five years. The system supposedly judges and evaluates every aspect of an individual's reaction to the relationship to eventually pair them with "the one." After a romantic 12 hour relationship between the two leads, they both struggle through years of mediocre to horrible relationships with a lot of people they don't really connect with, until finally, the system puts them together again, and they decide to rebel and run away together. It is later revealed that all the couples are simulations in a phone based dating app. Running the simulations reveals a near perfect match if you and the person you are paired with rebel and run away together for a certain percentage of test scenarios. It is a cute episode and is one of only a few that has a glimmer of light and hope. Anyone can appreciate the occasional happy ending in a show that is normally pretty bleak, but it lacks the same level of emotional weight as previous episodes that this tries to emulate, namely San Junipero in season 3.

Episode 5: Metalhead
The shortest episode of season 4, Metalhead is sparse, in terms of the larger plot and even dialogue. But despite all that, this episode feels like one of the longest. An unrelenting, heartracing story of a woman named Bella, played remarkably well by Maxine Peake, who runs for survival from a demonic robotic dog that she and her group awakened, and is bent on killing her. The episode is entirely shot in a grainy black and white that does a good job at imparting the bleak feeling in this evidently post apocalyptic world. Virtually no detail or background information is given in regards to the group of people, how these robot weapons came about, or the state of the country their in or the world. The majority of the episode is simply Bella's struggle to survive as the robot is in hot pursuit, determined to kill her, and much of the run time is devoted to the different ways this near-noiseless and tireless predator can track and kill its prey, even after its own death. There is no definitive ending or clear meaning to take away, but the very last shot reveals the items that the only three characters seen in the episode died trying to retrieve: teddy bears.

Episode 6: Black Museum
This episode has almost a retro feel to it right off the bat, as a young female protagonist named Nish is listening to music and driving an old looking car through a desert. The near-future timetable is revealed after she pulls out a solar panel to charge the car. With a few hours to spare, she wanders into the only building around, a hard crime museum, where viewers are treated to not just one but three exceedingly messed up stories of technology going horribly wrong, told by the instantly unsettling owner and former experimental scientist, Rolo Haynes. Haynes takes Nish on a tour, showing her two dark tales of experiments that, while starting with good intentions, predictably went horribly wrong for those involved. After the two harrowing stories, it is all tied together when Haynes shows Nish the "main attraction," which is a former death row inmate who had his consciousness trapped as a hologram in the museum, where patrons could pay to electrocute him over and over. He is actually Nish's father, and she gets a hefty dose of revenge that while dark, ends the episode on a positive (ish) note. Though it may not contain all of the elements to be up there with the best of the best, "Black Museum" and its three connected stories definitively need to be watched.

So after going through every episode in the season, here is where they stand, from best to worst:
1. USS Callister
2. Metalhead
3. Black Museum
4. Hang the DJ
5. Crocodile
6. Arkangel
Black Mirror hasn't yet had its return confirmed, but if there is to be a fifth season of the hit series, it will likely air in late 2018, following the trend of the past two seasons.

Nate Bodner. I write, I play soccer and I build things for stage crew. Game of Thrones books>T.V show More »