Vending machines in MCPS will open 30 minutes after bell

In the past few years there has been a major initiative to bring healthier foods to schools. So far, most of the focus has been on school lunches, but Montgomery County Public Schools (MCPS) has taken it a step further by trying to tackle the issue of unhealthy snacks. Starting during the 2013-2014 school year, vending machines serving unhealthy snacks will be shut off from midnight until 30 minutes after the final bell. This new rule only affects vending machines that do not follow the guidelines listed in the MCPS wellness policy on competitive foods. Although it is a first step, this initiative will most likely not change anything, especially for high schoolers. 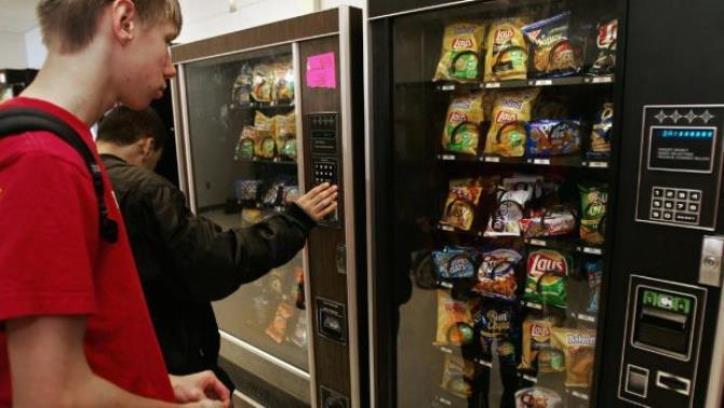 Photo: Students attending schools in MCPS will have to say goodbye to high-calorie snacks until 30 minutes after the school day.

Students attending schools in MCPS will have to say goodbye to high-calorie snacks until 30 minutes after the school day. Photo courtesy of CBS News.

Real Food for Kids-Montgomery, a grass-roots parent advocacy group that promotes healthy nutrition in Montgomery County, created a major push for this new legislation. Their website explains that this new policy "will no doubt have a positive effect on many children." It could potentially stop the after school rush from snacking on unhealthy treats, at least until they get home.

This new rule, however, will probably not be a huge change in the lives of Blazers. First of all, many students stay after school for well over 30 minutes to catch up on work and for extracurricular activities. For schools with a large population, like Blair, the numbers of students that stay after the last bell is high. Also, high schoolers tend to have much more access to money than middle and elementary schoolers. Since they also have more freedom then younger students, they can easily go to restaurants and stores nearby to get a quick snack. The fact that the unhealthy vending machines are closed for a short period after the final bell will probably not stop Blazers from heading across the street to Chipotle or Starbucks. On the other hand, it might be a bit of a change for middle and elementary schoolers. When they get some money of their own, many do spend it on snacks in vending machines at school. In this sense, it could have a positive effect on younger students. It might save them some money and help them avoid unhealthy foods.

Another reason that this won't particularly affect Blair students is that there still will be several vending machines working immediately after school and during lunch. Fruit drinks and certain chips will continue to be available in some vending machines; the snacks will just have to follow the guidelines that MCPS created. The requirements include limitations on the amount of total fat, sugar and/or sodium a snack can have.

Recently, the U.S. Department of Agriculture (USDA) created similar guidelines for schools which includes the same policy regarding vending machines. However, the USDA requires schools to adapt these guidelines in the 2014-2015 school year, as opposed to this coming year. Additionally, in a MCPS Office of Legislative Oversight report, they explain that MCPS has met and surpassed the requirements set in USDA nutritional guidelines. According to the report, MCPS has included more specific details in their guidelines including serving sizes, additional limits on fat, saturated fat and sugar content and specifications on types of beverages in vending machines.

Because of the new federal requirements, next year, all around the country, schools' vending machines will be closed from midnight to 30 minutes after the final bell. If schools all over the U.S. are adapting this rule, then they should have a system similar to Blair's. Schools should have vending machines available that offer healthier choices instead of sugary treats, as opposed to restricting vending machines all together during the school day. If schools close all vending machines until after the school, they might lose a major source of income and students would lose a cheaper alternative snack. However, if schools had certain vending machines with healthier snacks, such as baked chips and fruit drinks, opened at lunch and right after school, it would be a better option than solely meeting the guidelines set by the USDA.

Limiting certain vending machines until 30 minutes after the final bell will most likely not be a huge difference for Blazers. However, for younger students, it could be a small adjustment in their lives. One thing for sure is that if there is going to be modifications to the vending machine snacks, there should be an alternative option with healthier snacks. Real Food for Kids-Montgomery and MCPS had good intentions when creating this new policy, but it will most likely not receive as drastic results as intended.