In their closest and most exciting game of the season, the varsity softball team made an amazing comeback from a six run deficit. The game got off to a slow start for the Blazers whose defense was a bit off at the top of the game. However, when things got grim for the team, they rallied together and improved both their offense and defense. Going from a six run shortage to a three run lead, the Blazers eventually overtook the Clarksburg Coyotes. They closed out the game, their lead slightly lessened,by the score of 11-10 Blair.

From the start of the game the Clarksburg offense was a challenge for the team. The Coyotes proved to be a strong hitting team that tested the usually solid defensive strength of the Blazers. Blair closed out the top of the first inning defensively tested, but ready to go out and perform strong offensively.

Blair scored in the first inning of the game at the bottom of the second inning. The entire inning was offensively solid for the Blazers, who scored the first run after multiple clutch hits. Pitcher Karylena Cruz hit an RBI straight over the pitcher's head that sent senior outfielder Megan Houlihan home.

It was at the top of the third inning that the team began to struggle. The defense had trouble keeping up with the Clarksburg offense. The Coyote's hitting power allowed them to multiple runs on various hits. Although they surrendered various runs Blair's defense made some great plays, with outfielder Andrea Brown making an incredible catch in left field that closed out the inning. But, by the end of the third, Clarksburg was up by five runs. 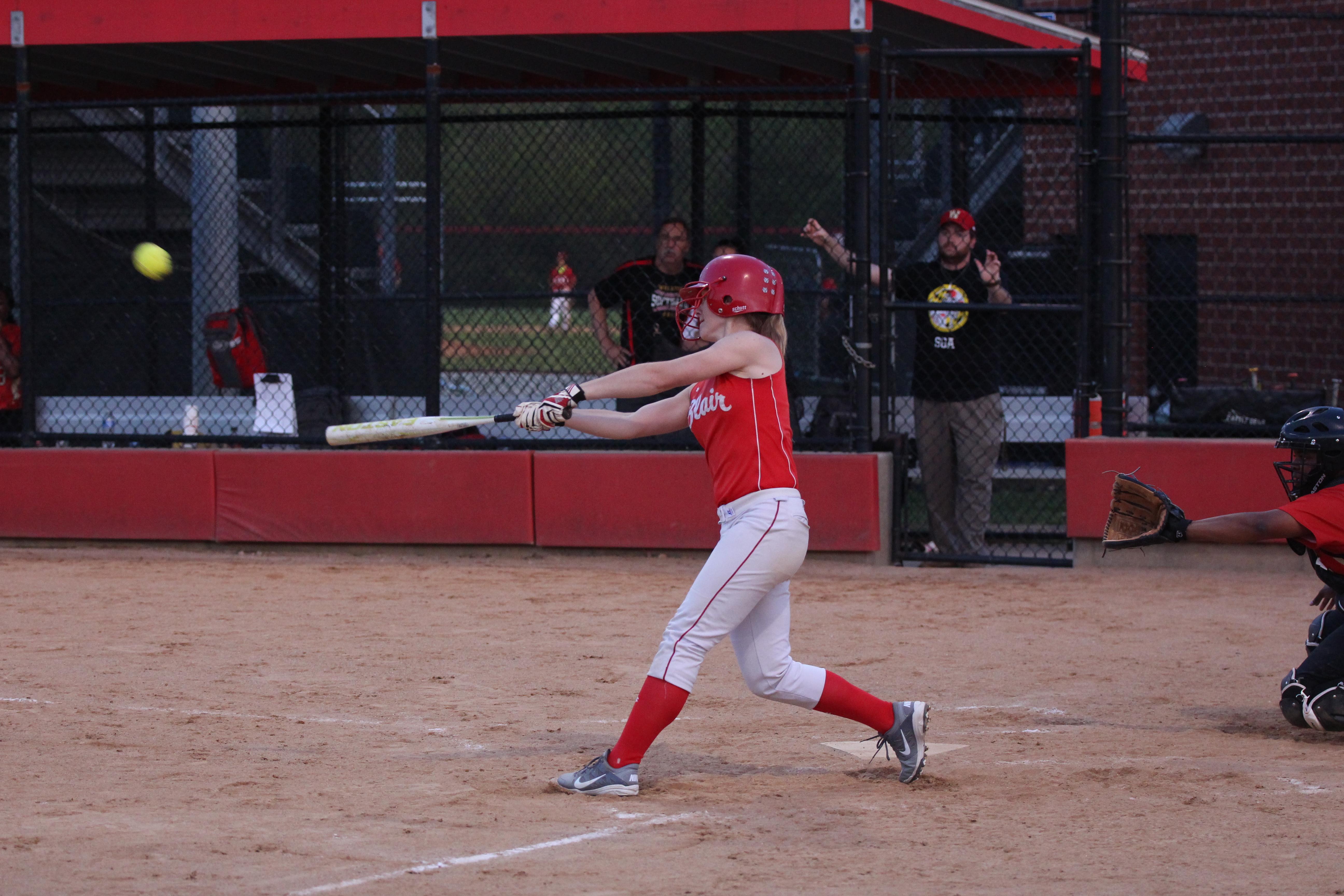 Photo: Senior Megan Houlihan gets a hit off the pitcher.

Photo: Senior Megan Houlihan gets a hit off the pitcher. Photo courtesy of Gabriel Cote.

The fifth inning was when the Blazers started to make their comeback. Down by six runs but not going out without a fight, the Blazer offense rallied together. With junior shortstop Mildred Devereux already on base, Brown successfully bunted left and got to first base while Devereux advanced to second. A defensive fumble on the part of Clarksburg helped Brown and Devereux to steal second and third respectively. But it was Houlihan who palpably helped turn around the game for the Blazers by hitting an RBI triple that sent both Devereux and Brown home. Senior Camilla Arias hit the next RBI that sent Megan home. By the ending of the inning Blair was up three runs and obviously gaining on Clarksburg.

At the top of the sixth inning a Clarksburg runner hit a home run deep into right field. The Clarksburg offense was slowly and clearly losing steam and the Blazers took advantage in the bottom of the sixth. With the bases loaded, Arias made a clutch hit that helped Brown score a run. Pitcher Karylena Cruz and catcher Maria Cruz hit RBIs that got them on base and relief runners Izzy Lott and Lily Montgomery were sent in to score for them. Junior Reva Kreeger got in a hit that sent Montgomery and Arias home, and then Devereux hit an RBI that sent Kreeger and Lott home. By the end of the inning, up by three runs and clearly reinvigorated by their success, the Blazers entered the top of the seventh loaded with confidence.

The crowd, which also received a boost of energy from the seven run turnaround, cheered the Blazer defense to victory. Things looked a little troublesome after a Clarksburg batter hit their second home run of the game, which scored them two runs. But the Blazer's rally was ultimately too much for them and crucial plays by Arias, Kreeger and sophomore outfielder Alison Mackenzie helped to close out the game, 11-10, Blair.

About their stellar win, Devereux praised the team's ability to turn the game around when it was most needed. "I think we started a little slow but once we were down we did a really good job of picking up the intensity,” Devereux said. She was also optimistic about the team's ability to duplicate this performance and effort in the playoffs. "I think our rally was a really good indication of what we can do in playoffs and when we play these really tough teams.”