All about Blair’s ice hockey team

Every Monday at the Wheaton Ice Arena, a pack of high schoolers decked out in hockey gear arrives for practice. Lacing up their skates and stepping onto the ice, they whiz across the rink as frigid air rushes past their faces, staining their cheeks with pink. Pucks fly across the rink, resounding against the walls - this is Blair's ice hockey team.

Though they may not be well known within the school, Blair's ice hockey team is a force to be reckoned with. The team is at the best it has been in years, with a record of 8-3-0 in the regular season. Currently, they are in the midst of playoffs for the Maryland Student Hockey League.

Unique among all the other sports at Blair, the ice hockey team is formed with not only Blazers, but also students from other downcounty high schools, including Einstein, Wheaton and Northwood. The skaters, a mix of boys and girls from various schools, come together to represent Blair on the ice.

The team is also composed of skaters of every skill level, which brings skaters a myriad of opportunities to learn from each other. Senior John Kim remarks on his unique opportunity for growth on the team. "I'm personally not the best in the team, but I get to learn a lot from my teammates and that's been a very unique experience," Kim says.

As one of the three girls on the team, sophomore Lily Bendavid loves the experience of being a part of the team. "It's pretty crazy, [but] I think it's really really fun. There's a lot of energy and people just really want to win and have a good time," Bendavid says.

Despite the fact that all the skaters love playing ice hockey, the sport is not economically feasible for many. The cost of equipment and ice time racks up more than $1000 for new equipment. Assistant coach David Frank explains the cost of the team. "I think we're paying $1300 for each player just for our ice time and practice times, [which] covers game times and also referees and things like that. So yeah, it’s expensive," Frank says.

The expensive price of ice hockey is one of the reasons why the sport isn't considered a varsity sport by MCPS. Instead, it is deemed a club sport, which means that the team doesn't receive any funding from MCPS or the school, and the players have to pay to play. Given the costly nature of ice hockey, there is also lots of parental support involved, whether that be coming to games, driving, providing financial support, or even coaching as part of the team.

Senior Ben Russell attests to the familial environment of the team, as everyone enjoys being on the ice and working together as a team. "We spent four years, you know, playing together and that creates a really tight bond between teammates . . . I love these guys," Russell says.

Likewise, senior Peter Zelinsky receives a fun and supportive vibe from the team. "It's a very light-hearted and joking community. We always take the opportunities to lift each other up but also have a little bit of fun wherever we can," Zelinsky adds. 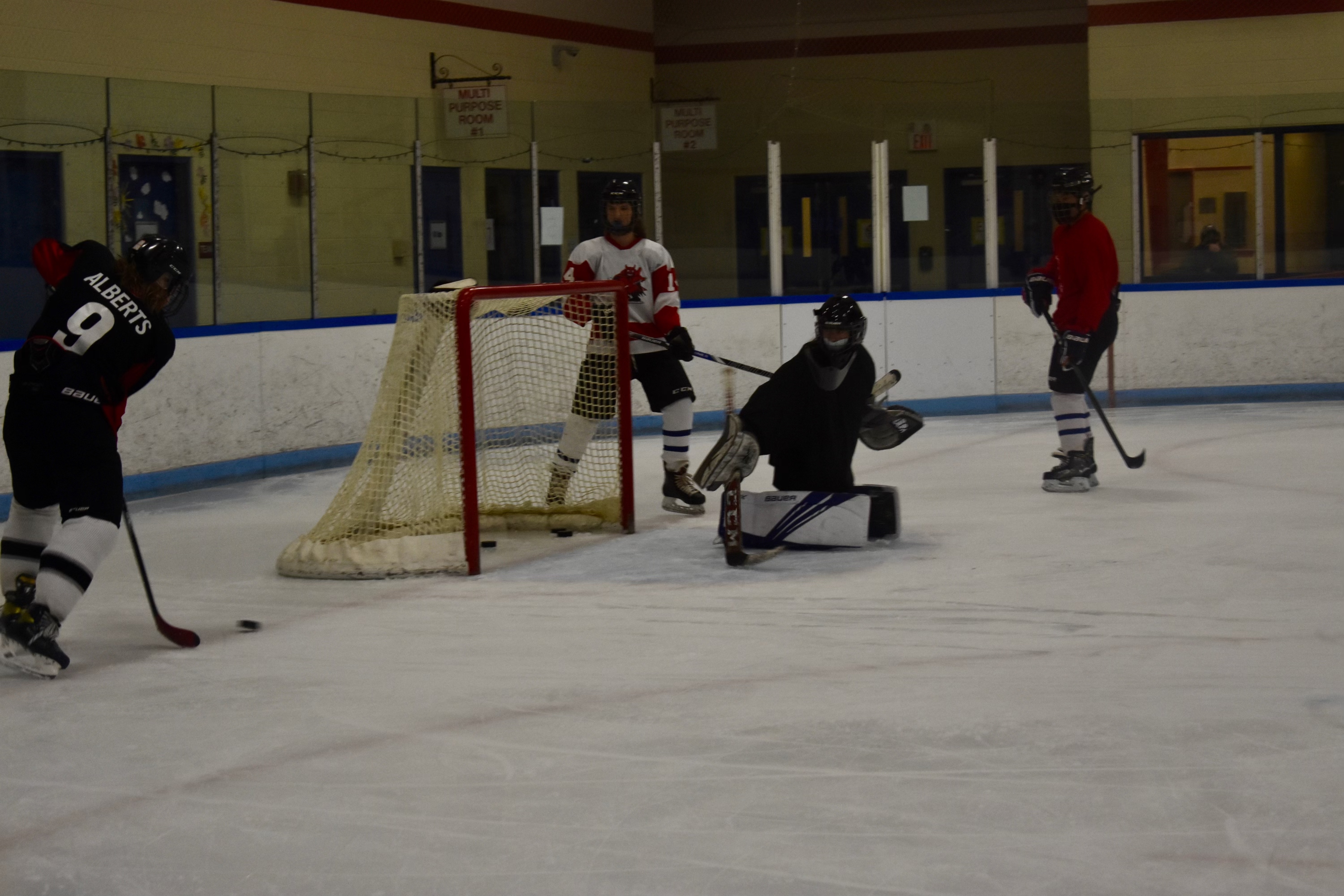 For everyone, there's something that draws them into hockey, whether it be just being on the ice, being a part of a team, or working out with their friends.

Russell finds satisfaction in the hard work he puts into the sport. "That feeling of creating a good place where everything really works out and you've worked your butt off to make that happen; that feels really nice," Russell says.

While the gratification of hard work compels Russell, it is the rush of being on the ice that draws senior Ryan Frank into the sport. "[It's] the feeling you get on the ice and just having fun with your friends and playing hockey," Frank says.

Others merely love the feeling of community that the team brings, including senior Alicia Dalbey. "​​The feeling of being part of something larger than yourself and working towards a common goal with other people is just really amazing," Dalbey says.

Junior Michael Humphreys loves the sensation of hitting the puck into the goal. As many have started skating at a young age, hockey has taken up an irreplaceable part of their identities. "It's pretty much my life now [and] I look up to it every day," Humphreys says.

All the love and passion they have for hockey translates into better performance in games. Zelinsky has been on the team for all four years, and even still this year's team has been the finest. "This year we actually have the best team that we've had so far," Zelinsky says.

So come out to watch and support the Blazers at their games on Friday evenings! The energy and excitement of a hockey game are unmatched. "Hockey is the fastest game on two feet. It's got a little bit of everything: contacts, hits, good speeds, and skill," says Frank.

If interested, their game times can be found on their Instagram @blairicehockey. They will be playing Wootton this Friday, Feb. 25 at 8:15 p.m at Cabin John Ice Rink.