Blazers are victorious in a noncompetitive 57-35 win at home 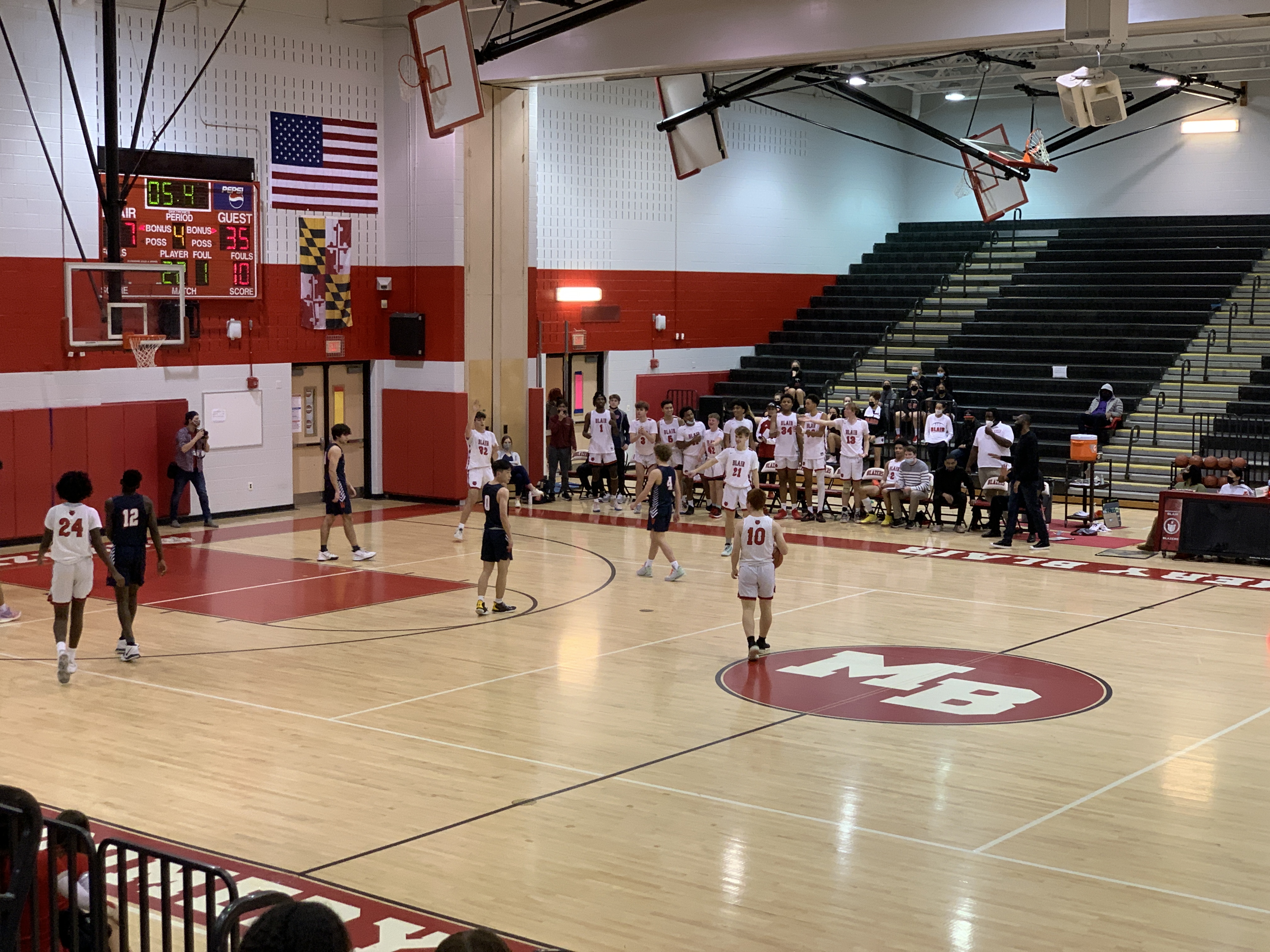 Blair closes out their 57-35 win against Wootton

Photo: Blair closes out their 57-35 win against Wootton.

Photo: Blair closes out their 57-35 win against Wootton. Photo courtesy of Sachin Parikh.

Blair certainly didn’t play well in their 57-35 win over the Wootton Patriots on Tuesday, tallying up 20 turnovers over 32 minutes of basketball. The Blazers fell victim to sloppy, selfish play. In head coach Paul Mensah's words, "There was too much of 'I want to do everything by myself.'" But despite catching the Blazer offense on a bad day, the Patriots were simply no match for even an underperforming Blair team.

On Blair's third possession of the game, senior forward Giovanni Moore splashed a corner three to open the scoring for both teams. Setting a precedent for the rest of the game, Blair's defense was airtight against Wootton’s ball-handlers, poking and swatting the ball away to force turnovers, but also getting called for multiple reach-in and shooting fouls.

Blair had few consecutive scoring possessions and repeatedly turned the ball over, but their solid defense and Wootton's inability to make baskets kept the Blazers' lead unchallenged.

Wooton's four points in the first quarter were all from free throws. Moore sank another three with a minute to go, and the quarter closed with Blair leading 16-4.

When the second quarter started, Blair's offense remained stagnant, but the flaw in their defense seemed to be resolved.

One of Blair's biggest weaknesses in their previous games was their dismal performance on the defensive board. From the second quarter on, Blair tightened up and finally started coming up with consistent defensive rebounds.

Despite being highly critical of Blair's offense, Coach Mensah was pleased with the Blazers' defense. "Defensively, I thought we were OK. There wasn't too much that I would complain about," Mensah said.

For the Blazer offense in the second quarter, it was more of the same. Blair frequently got whistled for traveling violations and the whole team struggled at the free throw line. Referee (and NBA hall of famer/MoCo crossing guard) Adrian Dantley called Moore for a travel on two straight possessions.

Blair closed out the quarter with a steal and an and-one play on the other end of the court by Moore, shortly followed by a corner three from junior guard Jonathan Pang. Even with their slow offense, Blair finished the half leading 32-16.

The second half seemed identical to the first. Blair's offense was careless with the ball, their passes were not productive, and they weren't having success at the free throw line. Their defense was still performing well. The biggest play of the third quarter was a lightning-quick steal and give-and-go between senior point guard Muller Torontow and Moore which shortly led to a thunderous dunk five minutes into the third. Blair wrapped up the quarter, still ahead and pulling away 41-23.

Despite the 21-point victory, Coach Mensah was highly critical of Blair's offensive play. "I liked the fact that we won. I didn't like how we played. I didn't think we played all that well. We had 20 turnovers. 9 assists. We missed 14 foul shots. That kind of effort in the playoffs, which is what I'm trying to get them ready for, if you do that, you'll lose," he said.

Mensah said Blair's offense needs to be less selfish with the ball. "Turnovers were happening because we weren't moving the ball a lot. You saw guys trying to do too much. Not sharing the ball. For example, when we beat Sherwood on Saturday, we scored 35 points in a quarter. We moved the ball. Everybody made the extra pass, executed…That's what we need to do more consistently," Mensah said.

Blair beat Sherwood on Saturday by scoring 35 in a single quarter, while they weren't able to score 35 in an entire half against Wootton.

﻿Blair's next home game is this Thursday against Paint Branch at 6 p.m. They have another home game the following day on Friday at 5:30 against Whitman. Friday's game will also be senior night.