The investigation is ongoing into the 17th school shooting in 2018

A male student shot two fellow students with a handgun at Great Mills High School on Tuesday at 7:45 a.m. before he was fatally wounded in a standoff with the school's resource officer. One victim, a 16-year-old female, was taken to the Shock Trauma unit and is in critical condition, while the other victim, a 14-year-old boy, is "in good condition" according to a representative from MedStar St. Mary's Hospital. The Federal Bureau of Investigation (FBI) is investigating the shooting, and the shooter's motivation and relationship to the victims is currently unknown. 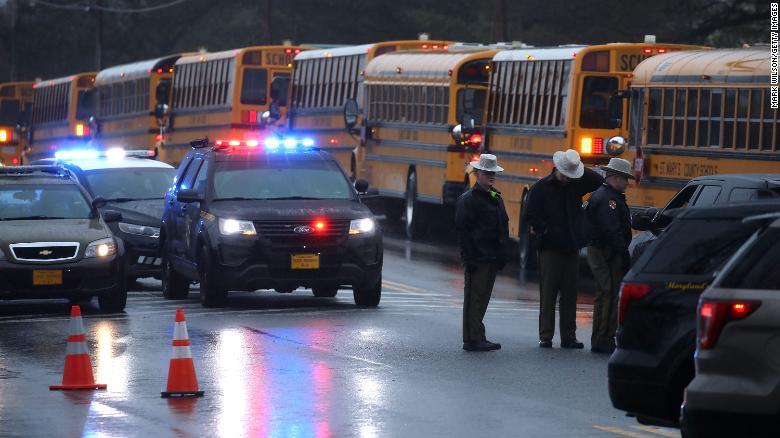 Students were evacuated from Great Mills and transferred to Leonardtown High School. Some parents reunited with their kids after showing photo I.D. Investigators held back eyewitnesses at Great Mills for questioning. One student at Great Mills, Jonathan Freese, called CNN from his cellphone during the lockdown. "Police were going through classrooms to clear the school. I'm still a little shaken up," Freese said. Other schools within St. Mary's County are continuing their normal daily schedule.

Maryland Gov. Larry Hogan issued a statement Tuesday morning that the Great Mills shooting should continue to fuel the ongoing discussion about gun control. "Although our pain remains fresh and the facts remain uncertain, today's horrible events should not be an excuse to pause our conversation about school safety. Instead, it must serve as a call to action," Hogan said.

This is the 17th school shooting that has occured in the 11 weeks of 2018, which averages out to 1.5 shootings per week.

Editor's Note: This is not original reporting. All information has been compiled from various news sources. Silver Chips Online posts this news summary to provide readers with a forum for discussion.

Madeleine Tilley. Hi, I'm Maddy. I enjoy rowing for the Blair Crew team and spending time with my dogs. More »