The power of big business

Corporations prevail over individuals yet again

On June 20, the U.S Supreme Court sided with Walmart in the case of Walmart vs. Dukes. The multi-billion dollar class action suit, which began ten years ago, involved 1.5 million female Walmart employees across the country. The employees claimed that Wal-mart practiced gender discrimination, both in employee treatment and wages. This decision, which is considered to be a landmark ruling, will only give rich and powerful businesses precedent in future sex discrimination cases. 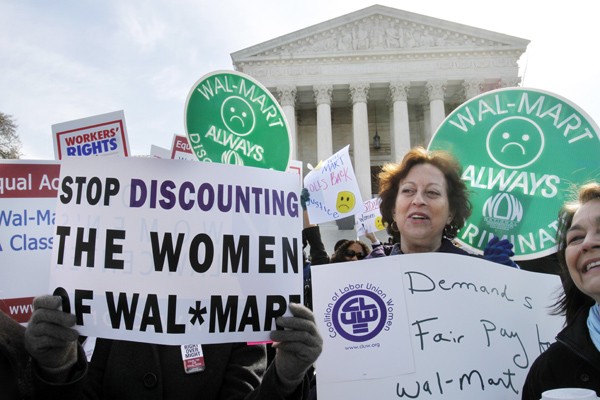 Photo: Protesters stand outside of the Supreme Court to fight against sex discrimination.

Photo: Protesters stand outside of the Supreme Court to fight against sex discrimination. Photo courtesy of Associated Press.

The Supreme Court case did not question whether or not the immediate evidence was valid, but rather if there was enough evidence to proceed and whether or not the case fit the characteristics of a class action suit. The final ruling declared that thousands of discrimination claims could not be grouped together in a class action suit; it was also stated that Walmart vs. Dukes was not concerned enough with monetary claims. In other words, there could not simply be thousands of allegations of sex discrimination, there had to be actual proof that there was unequal treatment between male and female employees. This conclusion by the Supreme Court begs the question, isn't the word of thousands of completely different women enough proof? Although it isn't always wise to trust a person's allegations, when over a million people from completely different locations, backgrounds and jobs are all claiming the same thing, the legitimacy of the claim must skyrocket.

Big businesses and their sympathizers believe that it is unfair for corporations like Walmart to defend, in a court of law or to the public, the treatment of thousands of workers from different places, with different jobs under different management. This gives big companies protection against costly class action lawsuits that would be harmful to their images. The outcome of Walmart vs. Dukes shows businesses that if they are big and powerful enough, their employees won't be able to band together to fight for their rights.

Walmart argued that the plaintiffs' claims did not constitute a class action lawsuit and that they did not present sufficient proof of gender discrimination. Several big corporations such as Costco and Toshiba also have pending lawsuits similar to Walmart vs. Dukes. It is probable that in these cases, the courts will come to the same conclusion: that there is not sufficient evidence to continue. Because of the Supreme Court's decision, female Walmart employees will not be able to continue in a class action suit and will only to be able to pursue individual cases with much less at stake.

The five conservative Supreme Court judges, being more for the laissez-faire policy of business, sided with business mogul Walmart. The other four judges (three of whom are women) took the plaintiffs' side. Walmart vs. Dukes can be viewed as a landmark ruling because its outcome will not only affect the thousands of female employees involved, but also all future sex discrimination cases. Employees will no longer be able to band together to secure their equal treatment and pay, while big corporations such as Walmart will continue to gain more power over millions of Americans. The power of business has won again.