Snack on this: New vending machines promote health but have downfalls

The healthier options are just one step in the right direction

In October, Blair acquired six new vending machines with healthier options as part of the Be Well 365 Initiative, a countywide program to "address the physical, social and psychological well-being of students," according to Montgomery County Public Schools (MCPS). The machines were supplied by Vend Natural, an Annapolis-based company that specializes in "[providing] customers with delicious, high quality products at affordable prices." From Popcorners to Nature's Garden trail mix, the vending machines provide students with snacks that are better for them than traditional vending machine food.

Principal Renay Johnson introduced the change in an Instagram post that received mixed responses. Some members of the Blair community were seemingly appreciative of the new machines, citing the benefits of healthy foods. Others — like freshman Sarbani Poulsen, who wrote "I just want my peanut M&Ms back" — expressed their frustration over the changes. Regardless of differing student opinions, the new vending machines are a commendable first step toward Blair's emphasis on wellness, but, like all first steps, they have weaknesses that must be kept on users' radars.

The biggest difference between the old and new machines is the absence of candy and chocolate. Snickers bars, Skittles and similar offerings are no longer available. However much disappointment the decision brought on, eliminating candy is a positive step toward student wellness. Dr. Chana Kraus-Friedberg, liaison librarian for Michigan State University's Masters in Public Health program, emphasizes that "children's school performance is impacted by their sugar consumption in a few ways," noting that empty calorie consumption and sugar crashes harm students' ability to focus. Making sweets less accessible to students in a school environment is likely to present improvements in both their physical and mental health.

Of course, an occasional dessert does not detract from students' health or ability to focus in the long term. Administrators took that into account in selecting products for the new machines, providing several healthier versions of old snacks. Whole grain Pop Tarts, among the new offerings, are slightly lower in caloric, fat and sugar content than the previously-offered regular Pop Tarts. Therefore, they prevent students who want sweets from consuming as many empty calories while still giving them a sugar fix. Buzz Strong's chocolate chip cookies, also in the new machines, are yet another example. The cookies are high in fiber and have a lower sugar content than regular cookies.

While the old machines only allowed cash payment, the new machines also accept card or electronic payment, allowing for a wider range of Blair students to take advantage of the healthier options. The rollout of the new payment options was faulty — students who tried to use systems like Apple Pay initially received extra service charges on items — but MCPS' Central Office fixed any issues, according to Johnson. 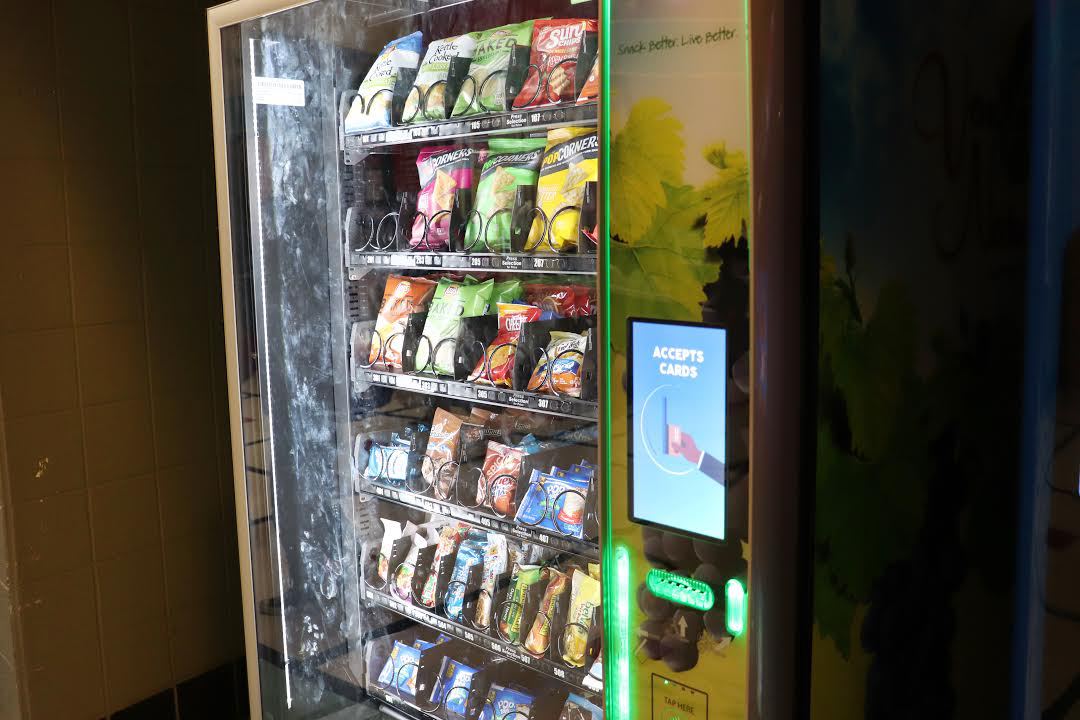 Photo: Blair's new healthy vending machines are a good first step, but have a ways to go (courtesy of Catherine Lo).

Photo: Blair's new healthy vending machines are a good first step, but have a ways to go (courtesy of Catherine Lo).

Despite the increase in nutritious snacks that the new vending machines have brought, they do have some imperfections and should by no means be the only step in Blair's commitment to health. Several of the snacks for sale in the machines, while healthier than what was previously offered, are still not the best options for student well-being. The crunchy Nature Valley granola bars offered, for example, are "far from natural" and contain a significant amount of added sugar ingredients. The available Cinnamon Toast Crunch cereal bars may encourage students who do not otherwise eat breakfast to do so, but they are highly processed and contain several controversial additives such as Maltodextrin and the potentially-carcinogenic BHT.

When consumed in excess, maltodextrin "may lead to an increased glycemic load and therefore post meal glycaemia, which are viewed as less desirable for health," says Maastricht University's Dr. Denise L. Hofman. Although the new vending machine snacks do not pose major health risks when consumed in moderation, students who may misinterpret their "healthy" branding and eat them too often may see negative long-term effects.

Staff do acknowledge the downfalls. "Even though [the machines] are not 100 percent healthy, they're better than what we had before," Johnson explains. While Blair unfortunately does not have plans to offer completely healthy snacks to students in the near future, Johnson does bring up the valid point that the school cafeteria offers those already. "We have items available in the cafeteria, and we never sell out of apples and oranges and bananas," she says.

As a school aiming to focus on health, Blair should be applauded for installing new vending machines and encouraging Blazers to eat healthier snacks that are more conducive to their well-being and classroom performance. They should also not be afraid to continue to take steps to promote health, including raising awareness about snacks that may look healthy but are not the best for students. Some student backlash should be expected, but Blazers should remember that vending machines are simply one of many food options. By acknowledging both the positives and negatives of the machines, Blair will demonstrate a sustained, genuine commitment to student wellness.