Participation in the SAT among black and Latino students in the class of 2010 decreased significantly in MCPS, despite the fact that the county celebrated record-breaking SAT scores among these same groups. However, the participation of blacks and Latinos who took the ACT rose. 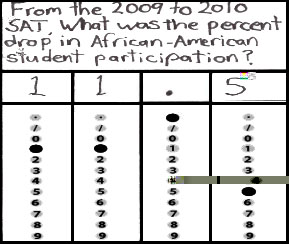 Though some county officials may draw attention to a correlation between the lack of participation among minority students and the county's record-breaking SAT scores, Thackston and Dana Tofig, an MCPS spokesperson, however, deny this theory. "I don't believe that [lack of participation] caused the scores. Our scores have been trending up," said Thackston. Montgomery County's SAT scores rose by 38 points, an increase to which Tofig does not credit participation alone. He attributes the raise in scores to the students' increased preparation.

Williams is working on a plan to help increase participation in the SAT and ACT among all Blazers. "We are developing a four year plan, starting in ninth grade that will help students know when to take the ACT or SAT," said Williams. "This will include more one on one conversations to help push students to be college ready."

Tofig also said that county-wide efforts to increase SAT participation will take place among all students, not specifically minorities.

Tofig stated that this decrease in minority participation is not cause for concern. "We still have a very high number of students taking college entrance exams, so there really isn't an issue," he said.