Boxing match is scheduled in wake of social media beef

Rappers Soulja Boy and Chris Brown have officially announced a pay-per-view fight will be taking place between the two celebrities. The fight is being organized by Soulja Boy through Mayweather Promotions, professional fighter Floyd Mayweather Jr.'s boxing promotional firm.

The fight has been announced in the wake of aggressive social media exchanges between the two rappers, which allegedly began as a result of Soulja Boy's liking and commenting on a photo of Chris Brown's ex-girlfriend Karrueche Tran on Twitter.

The insults have been coming and going ever since, as Chris Brown made fun of Soulja Boy's style and hairline. Soulja Boy returned with the tweet, "Chris Brown think he hard cuz he hit a woman. And jumped a fan at his house party on New Years lmao u can't fight expletive do that expletive to me." 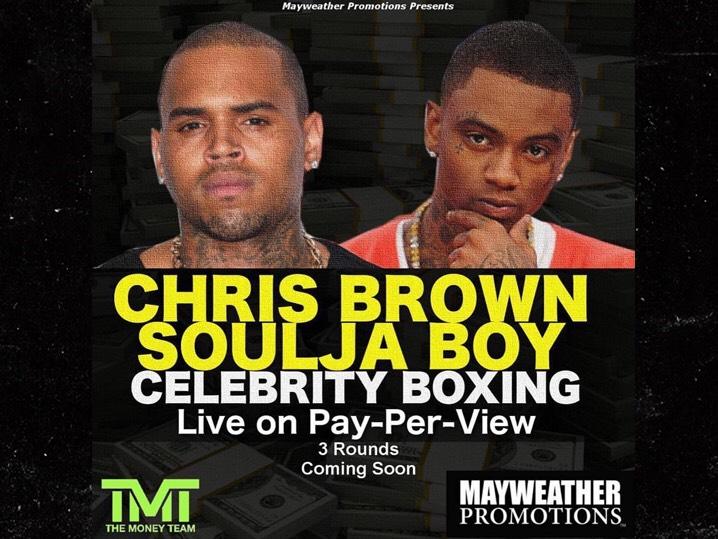 Photo: Chris Brown and Soulja Boy will have a live fight on pay-per-view television.

Chris Brown and Soulja Boy will have a live fight on pay-per-view television. Photo courtesy of TMZ.

According to a recent post by Soulja Boy, the fight is scheduled for some time in March and will be held in Dubai and broadcast across the world. Photos were released of the rapper signing documents alongside the CEO of the Mike Tyson academy, Fred Frenchy, finally adding some legitimacy to the upcoming match.

The rappers have recently taken a step back from their social media endeavors, instead focusing much of their energy into working with their respective personal trainers. Chris Brown has enlisted the help of former boxing champion Mike Tyson, and Soulja Boy is being trained by Mayweather Jr. In response to the announcement that Tyson would be aiding in Brown's boxing preparation, Soulja Boy tweeted out, "What's he gonna train you to do, bite my ear off?" This comment was made in reference to a dirty move from Tyson's boxing career in which he bit off a piece of opponent Evander Holyfield's ear.

It's still up in the air as to whether or not this fight will actually go down, but anything could happen, especially due to both rappers' affiliations with the infamous Fruit Town Piru Blood Gang in Los Angeles, California. References to gang violence in both men's lyrics point to the fact that this situation could quickly get out of hand.