Pro/con: Should military recruiters be allowed to promote enlistment in high schools?

Photo:
Section 9528 of the No Child Left Behind Act of 2001 requires public schools to allow military recruiters in schools where college recruiters are also permitted. Opponents of the provision argue that recruiting in high school unethically takes advantage of students, while others claim that military recruiters simply inform interested students of possible career options.

After falling behind in school and graduating a semester late, 2009 Blair graduate Chris Sanchez could have been worried about his future. Instead, he joined the National Guard, a path he says taught him responsibility and commitment. A meeting with a military recruiter at Blair first exposed Sanchez to the possibility of a successful career in the military, an opportunity that all Blazers should have. As long as college recruiters are allowed on high school campuses, military recruiters must have an equally prominent presence, because recruiters present students with a viable career path and a way to pay for college. 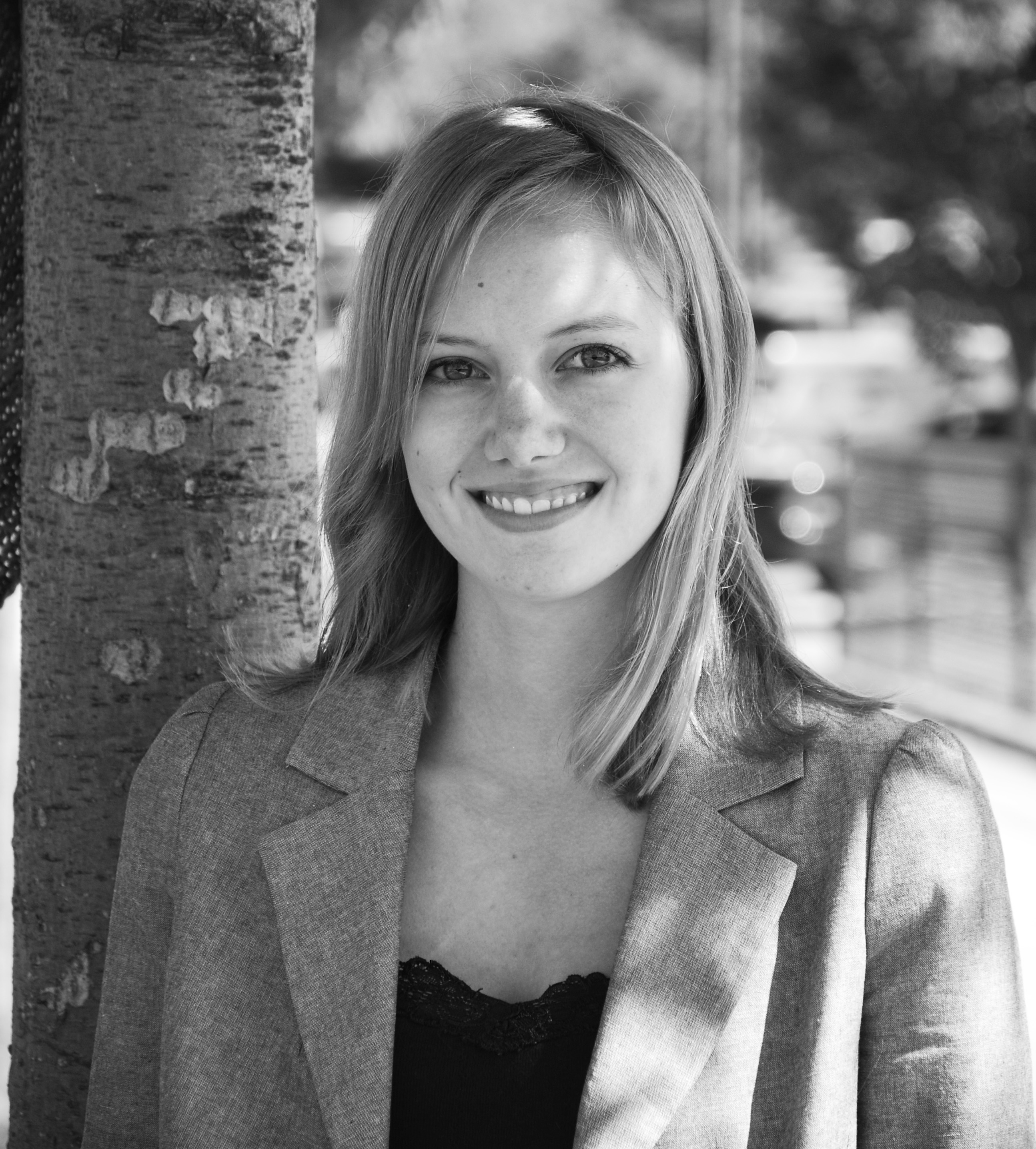 Photo:
Since 1973, the military has been made up entirely of volunteer enlistees. As the U.S. remains in conflict in Iraq and Afghanistan, the military needs people to volunteer to fight. Last year, for the first time in 35 years, the military met all of its recruitment goals, but this is an anomaly that the military attributes to the current unemployment rate. Each branch of the military still must recruit in order to meet goals every year, and high school is a sensible place to visit.

Young people remain a core contingent of military enlistees. According to Marine Corps recruiter Robert Stanley, 80 to 85 percent of Silver Spring recruits are between the ages of 17 and 19. Douglas Smith, spokesman for the U.S. Army Recruiting Command, said that these demographics mean it is essential to visit schools. "Our mission dictates that we focus on all potential schools, communities and populations. If we didn't, we'd be putting ourselves at a huge disadvantage in achieving recruitment numbers," he said.

A common misconception about military enlistment is that joining is a way out of high school. This is untrue. According to Smith, all recruits must have a high school diploma or General Education Development diploma, and because of this the number of students who drop out of high school actually hinders enlistment goals. In addition, while enlistees may temporarily forgo college in order to serve, they have plenty of opportunities to receive a free college education through a number of active military education benefit programs. "Not everyone was meant for college," Smith said. "The military is a good career option and a way to pay for college later."

Sanchez takes classes at Montgomery College, for which the National Guard pays. He plans to transfer to a four-year university, which the military will also cover. Under the Post 9/11 GI Bill, veterans from all military branches receive benefits that cover four years of tuition at the most expensive public institution in any state, as well as housing and textbook costs. Programs like this are particularly advantageous because they are available to veterans even if they choose to wait before beginning higher education programs.

NCLB gives recruiters access to student information, but it also allows uninterested students to opt out of giving their information. In MCPS, staying off military contact lists is as simple as checking a box on the emergency contact forms that schools ask parents to fill out each year. This means that recruiters pose no threat to students who don't want to join the service, but they can still reach students who may wish to explore the option.

When military recruiters visit schools, it allows them to meet with interested students who may not have walked into a recruitment center on their own. Everyone deserves a chance to be successful in life, and the military is one way of getting there. Taking away a convenient way to explore careers in the armed forces is nothing but a disservice to students who trust schools to guide them toward the best possible future.

Military recruitment is an essential activity in ensuring national security. Recruitment in high school may seem like a logical place to attract young, educated potential soldiers. However, public schools have an obligation to maintain high standards for the organizations they allow to have access to students, and the military as it exists today does not meet these standards. Until the U.S. Military reforms its unethical and discriminatory practices to meet the standards of public education, it should not be allowed to recruit in high schools. 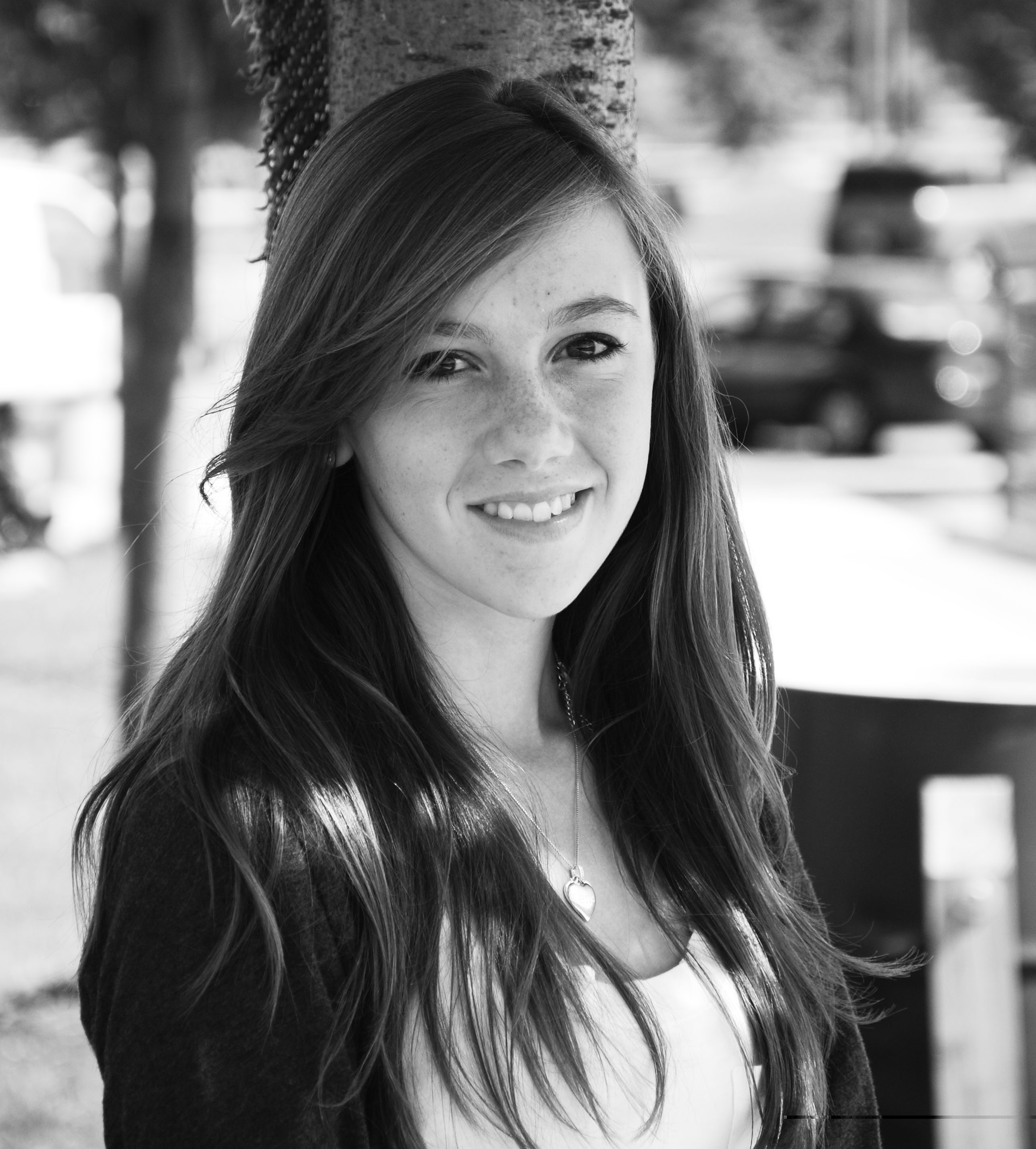 Photo:
Whether schools intend it, by allowing military recruiters into their buildings they spread the military's ideas to students. Such ideas include the "Don't Ask Don't Tell” policy, which actively discriminates against homosexuals by prohibiting them from being open about their sexuality while in the military. This infringes on the rights of many Americans and not only spreads an anti-gay message to students, but also encourages discrimination in general. Public schools wouldn't let a white pride organization like Storm Front into schools, but the military is essentially emphasizing a similar form of discrimination.

Schools are also unfit places for military recruiters because the military unfairly targets low-income youth by falsely promising financial aid for college after these students serve in the military. "The U.S. military's practice of targeting low-income youth and students of color for recruitment, in combination with exaggerated promises of financial rewards for enlistment, undermines the voluntariness of their enlistment,” said Soldiers of Misfortune, an American Civil Liberties Union report arguing against military recruitment in schools. Many possible recruits are promised that they will receive tens of thousands of dollars in education when, in actuality, 57 percent of veterans who have applied for Government Issue (GI) benefits have not received any financial aid, according to the non-profit organization Finding Alternatives to Military Enlistment (FAME).

Marine Corps recruitment pamphlets located in Blair's Career Center boast that the Marine Tuition Assistance Program will pay for "100 percent of your tuition at accredited institutions.” This pamphlet, however, fails to mention that this amount is not to exceed $4,500 per fiscal year, according to military.com. Presenting misleading information to students is unfair but often successful in manipulating them into thinking the military is their best or only option.

On their website, FAME also says that joining the military to receive financial aid is actually not beneficial for many students, because money received is actually taken out of one's financial aid package offered by the college. "Therefore, the expected out-of-pocket financial contribution from a veteran will be exactly the same as if they never entered the military,” the organization writes in The Easy Money for College Myth, an article posted on their website.

Just as the Military should take care of students' education after service, public schools must ensure that the organizations they endorse treat their members ethically, and recruiters fail to mention the neglect of their own soldiers who become injured or develop post-traumatic stress disorder (PTSD) after combat. In the article PTSD: ‘Not enough is being done' Bryan Kirk writes that if the disorder is developed, it is often considered a pattern of misconduct and can thus result in a dishonorable discharge. Once a soldier has a dishonorable discharge they are no longer eligible for Montgomery GI education benefits and other financial aid and education rights promised to them. Leaving out this important information in the recruiting of soldiers is unethical in any circumstance, but is especially heinous when directed at students under 18.

Military recruitment in high school feeds wrong information to vulnerable students and promotes discrimination. Military recruiters should not be allowed into the public school system until they can be upfront about the realities of joining the military.

Claire Boston. Claire Boston aspires to one day be as cool as Grace Coddington, Meryl Streep and Zelda Fitzgerald before she went crazy. Claire's interests include wearing neon tights, shunning serial commas and coming up with nicknames that distinguish her from the two other Claires on Silver … More »