Yesterday was odd – or rather, it wasn't. It was an all-period day, with parents scuttling in and out of classes like butterflies among caterpillars (if butterflies had white nametags and looked lost and uncomfortable). Some students happened to forget that it was an all-period day – but of course yours truly would never be confused like that – which led to incorrect binders, forgotten textbooks, strange looks from my physics teacher…wait, what was I saying? Right, well, some students were upset about the abnormality, especially since students used to get out of school on Columbus Day. Personally, I thought it was perfect. Embarrassment, confusion, stress, huge groups of people feeling like someone's screwing with their life for no good reason? Sounds like Columbus Day! All that's missing are the boats and the islands. But never fear, this intrepid reporter has traveled all over the Internet to bring you the best ways to make Columbus Day special – or at least very, very interesting. 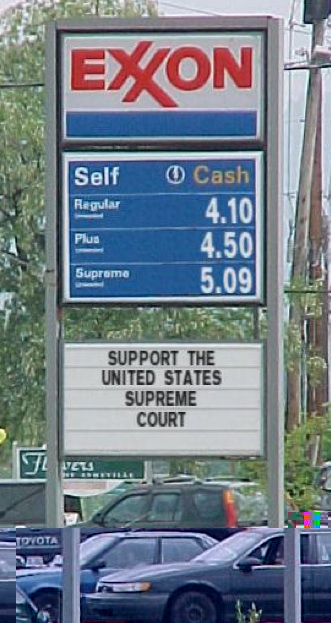 Photo: This could be yours. And it could say something much more awesome on it.

This could be yours. And it could say something much more awesome on it.  Photo courtesy of PR Watch.

Colonizing: back in style

Remember those seagulls from Finding Nemo? You know, the ones with the Australian accents screaming, "Mine!" You probably never thought of them as role models, but it's time to start. Every Columbus Day, we're embracing the history of the holiday (although embracing history is usually like embracing pudding – somewhat awkward and oddly resistant. Maybe it has to do with everyone being dead…) In this case, that history involves a lot of "Mine!"

There has got to be something that you've always wanted. Your older sister's room? The park down the street? One of those gas station signs? It's yours. Why? You said so. Just get a scroll, scribble on it officially, get in the room/chair/park/on top of the gas station sign, and start making things up off the top of your head. It should sound something like this: "Your Majesties, I have discovered a great new land/park/gas station sign/chair. I have officially claimed it and will be returning home with it shortly." Read your proclamation from your place of achievement, preferably at top volume – and if you actually do this, please take pictures and send them to me.

Now the so-called "rightful owners" of those properties may object, but don't worry. You saw them first. And if you didn't actually, well, who can prove it?

For those of you both lucky and unlucky enough to have a younger sibling, this will be easy for you. You'll need a weapon. Relax, I don't mean a real weapon - those are all too sharp and expensive. A big piece of paper with the word "GUN" on it should do the trick ("DISEASE" will work in a pinch.) The rest is simple: just run up to your unsuspecting victim, steal something of "theirs" (it's now yours), channel the power of Columbus and run off yelling, "Excellent! This island appears to be full of resources and completely deserted!" Ad lib if needed. If they get mad, wave the piece of paper in their face. But be careful; paper cuts are deadly.

Photo: You won't be needing one of these.

You won't be needing one of these. Photo courtesy of University of Texas.

Really, the ways to honor Christopher Columbus are infinite. Go to a random place and pretend it's Asia. Steal the thunder from your first mate (if you don't have one of those, a best friend will do). Basically anything criminal short of massacre…oh, wait.

The bottom line is that Columbus Day is a holiday about a man who wasn't the first person to go to a place where people were already living. We've all done that! Despite the fact that it's named after one guy, this is a "holiday" for you and me (quotations added because school was still in session). So remember, if you're ever in a position to make history, think, "What would Columbus do?" And then do the exact opposite.

Alison Kronstadt. Alison Kronstadt is happiest when she's making you laugh, so tell her her stories are funny or she'll cry. She has a lot of opinions and hopes you like to read them. She wrote her first bio when she was an awkward little junior and … More »