One of the best reimaginings of L. Frank Baum's novels

Prepare to be transported to Oz once again, but don't be surprised if the Merry Old Land of Oz isn't as merry as you once remembered. The journey along the Yellow Brick Road may seem much darker as director Sam Raimi's prequel "Oz the Great and Powerful" reveals the story of that man behind the curtain that we were instructed to pay no attention to in the original.

Although undoubtedly predictable, the stunning visual effects and acting make for a spectacular movie. Unlike many RealD so-called "3D" movies, the extra bucks spent on those 3D glasses will be well worth it. "Oz" includes many thrilling scenes that will invite you to journey with Franco and the gang. Some of the best 3D scenes are when Franco is swept into the tornado, the haunted forest scene and when the gang travels via Glinda's magic bubbles. Aside from the 3D, cinematographer Peter Deming does a magnificent job using a variety of shots ranging from wide shots to encompass the vibrant colors and details of this fantasyland, to point of view shots that invite the audience to experience Oz for him or herself. Oh what a sight it is. Art director Robert Stromberg offers jaw dropping visuals, similar to other films he helped design, like "Avatar" and "Alice in Wonderland." Just as magnificent as the bright and colorful landscapes, the fantasy characters are also larger than life.

Read more: The cost of another dimension 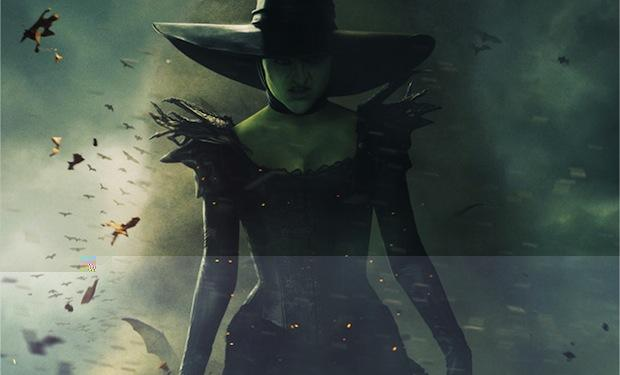 Photo: One of the many movie posters of "Oz" featuring the Wicked Witch of the West.

Photo: One of the many movie posters of "Oz" featuring the Wicked Witch of the West. Photo courtesy of Forbes.

With a combination of computer-generated imagery (CGI), puppetry and physical sets, Braff and King's fantasy characters were brought to life. Braff's character, Franco's monkey friend Finley, is one of the cutest and sweetest flying monkeys in a bellhop suit ever. From his sad-old face to the scruff on his face, each detail makes Braff's character encompass both animal and human characteristics. King's character, China Girl, is a sweet and sassy doll whose details in texture and highlights make her look as if she's made of real ceramic. Also, puppetry done by Phillip Huber helped make the characters even more realistic. Huber would wear a chrome suit, indistinguishable by CGI, and use a marionette puppet of China Girl. Although the puppet wouldn't be seen in the final film, it provided the animators a base for China Girl's movements. However, realistic detail is only part of what makes these characters so believable. Braff and King would perform their voices live in a soundproof booth near the soundstage. On stage while the live action was occurring, a moveable pole was used to transfer live footage from a point of view camera to the soundproof booth where the actors to react in real time. The pole also displayed the actors in the sound booth performing their parts in response to the live action. The intricacy of the fantasy characters and the interconnectedness of both voice actors playing animated characters and live actors helped make the interactions between the Ozians and fantasy characters so believable.

The fantasy characters weren't the only believable characters. Weisz puts on one of the most commendable performances of the cast. Weisz, The Wicked Witch of the East, uses a sing-song voice and her face lights up as she as she manipulates her evil minions, sisters, Franco and Ozians. Weisz gives off a youthful and jubilant vibe, despite her evil intentions, making her enjoyable to watch. Franco's, Oz, performance as a fake wizard was also well done. But don't think those magic acts came out of thin air. Franco trained with famous Las Vegas magician Lance Burton for weeks to learn illusions and embody a magician performer's persona. However, something Franco probably didn't have to learn from scratch was adopting Oz's character. Franco himself has a funny, suave, aloof and obnoxious persona, much like his character, making it easy for him to play a convincible Oz.

Photo: Oscar "Oz" Diggs (James Franco) journeys through the Land of Oz with the help of a monkey named Finley (Zach Braff) and a ceramic China Girl (Joey King).

Photo: Oscar "Oz" Diggs (James Franco) journeys through the Land of Oz with the help of a monkey named Finley (Zach Braff) and a ceramic China Girl (Joey King).

Those who do fall short in terms of acting, however, are the munchkins. Cox's character for example, Knuck, seemed out of place, as he ruined the ambience of this magical film. When Cox first appears on screen, it isn't hard to predict what his character will be like, as he has a history of playing angry little people in his filmography. Knuck is a loud-mouthed city herald munchkin that although an ally of Glinda, seems to only care about himself. His angry demeanor, negative criticisms and violent behavior taint the image of the happy and peaceful munchkins of Oz. When Knuck is onscreen, instead of seeing the character, you just see Cox, which can ruined part of the magic for me. However, happy and peaceful doesn't necessarily mean they'll be breaking out into song and dance in the movie. Well, they do for about 20 seconds, until Franco tells them to stop.

Raimi's vision of the Oz series by L. Frank Baum is not only bold and creative, but also well executed. To adapt such an imaginative text is difficult, but Raimi did it with precision and grace. Even if hardcore fans of the Oz series doesn't think it's as good as the book, it certainly lives up to it. "Oz the Great and Powerful" is a must see for fans of both the book and excellent cinematography.

"Oz the Great and Powerful" (130 minutes) is rated PG for sequences of action and scary images, and brief mild language. Now playing at theaters everywhere. 3D and IMAX 3D at selected theaters.