Last week, Montgomery County Ride On buses started to display ads featuring pictures of Blair students' eyes as part of a Montgomery County campaign targeted at high school students in the Four Corners area to improve pedestrian safety in areas with the highest densities of collisions. 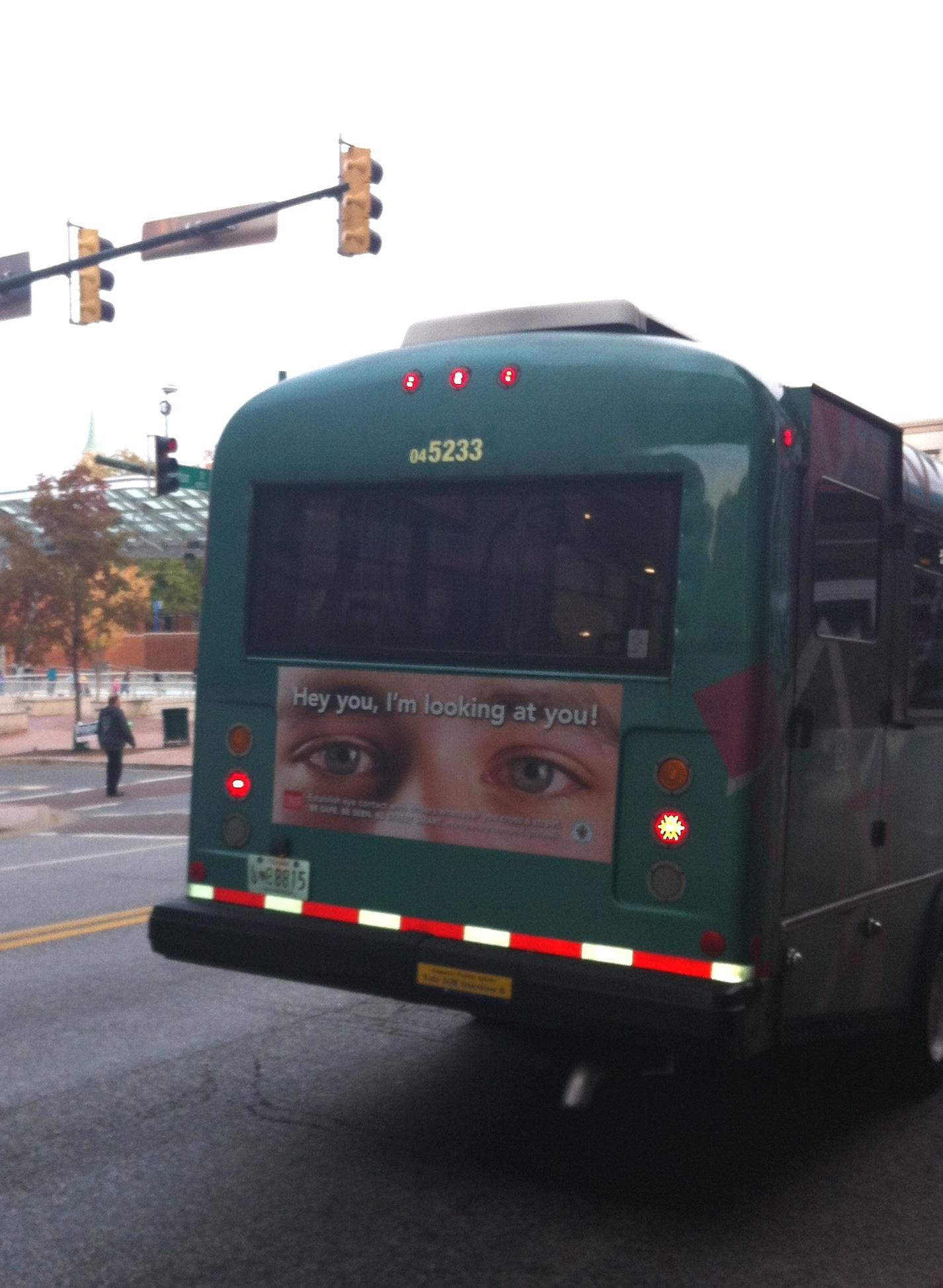 Photo: Ride On buses feature the pedestrian safety ads with John Parsley's and Hillary Yeboah's eyes' as a part of the new campaign.

Photo: Ride On buses feature the pedestrian safety ads with John Parsley's and Hillary Yeboah's eyes' as a part of the new campaign. Photo courtesy of Isabel Hendrix.

On Thursday, school administrators had a meeting kicking off the pedestrian safety initiative to talk about future projects. Assistant Principal Andrew Coleman is in charge of organizing the initiative and carrying out projects to promote knowledge about safety. Coleman said he and Principal Renay Johnson plan to attend a press conference Wednesday in downtown Rockville focusing on safety issues.

Coleman said he is enthusiastic about leading the campaign. "I'm really excited, I like that I am able to so this and be a part of a team to help students, teachers and staff members," he said.

The assistant principal said that Blair is the flagship school of the campaign to provide information to other schools and people. He felt that this was an opportunity for Blair students and staff to join together to fulfill a goal. "It's really an opportunity to bring everyone together with one common purpose," Coleman said.

Coleman will be looking to recruit students to work on the different projects lined up for the campaign. By participating in the campaign and volunteering their time, they will receive Student Service Learning (SSL) hours. Some of the projects he is looking forward to are the "Blair Walk Project" and a potential street art contest. "It's an opportunity for students to do what's right. It's really all about safety and making sure students are safe in the area," he said.

For the walk project, students would be trained in pedestrian safety and prepare to teach in elementary schools and other schools in the area. He plans for the project to initiate during the first week of December. The street art contest would involve the school's art department and students interested in competing and promoting safety.

Senior Hillary Yeboah and Blair alumni John Parsely competed in May to have their eyes featured on posters that urge pedestrians to establish eye contact with drivers and look both ways before crossing the street. These "best eyes" posters will reappear in Blair within the next few days to get students thinking about safety. They are now being displayed on Ride On buses and say, "Hey You, I'm Looking at You!" 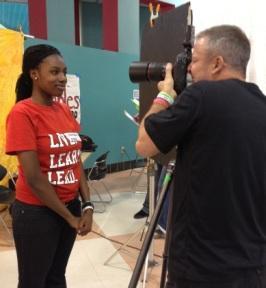 Photo: Senior Hillary Yeboah poses in May for the safety ads contest.

Photo: Senior Hillary Yeboah poses in May for the safety ads contest. Photo courtesy of Montgomery County Dept. of Transportation.

Yeboah feels that this campaign is a good way for students to be safer. "I think it is an important topic that needs to be addressed. Many students get into cars accidents whether in cars or walking on the street and I think it is great that Montgomery County is taking steps to reduce this situation," she said.

According to Coleman, "Hillary has been a really good champion in this project."

In addition to the new ad campaign, drivers and pedestrians who do not follow the law near the intersection of Colesville Road and University Boulevard will receive $50 tickets. Pedestrians in the area can be fined for jaywalking and drivers for not obeying the posted speed limits and signs, blocking crosswalks and intersections and running red lights. The county hopes this initiative reduces the amount of jaywalkers and promotes safer driving practices, especially among students in the Four Corners area. Yeboah believes the fine is effective in teaching students to follow the law. "I think the amount of the fine is a bit much, but I do think it is an effective way to make sure kids are more safe," she said.

The Four Corners area was identified as one of Montgomery County's high incidence areas for pedestrian collisions. According to the Department of Transportation, collision data from the Four Corners area shows that people under 20 years of age and people over 50 have been involved in the collisions, mostly during daylight hours. The county government partnered with Blair students to create the pedestrian safety campaign with the theme, "Hey You, I'm Looking at You!"

Police are currently enforcing pedestrian safety laws and recommended the following tips in the Silver Spring Patch: Pedestrians should cross the street at marked crosswalks and intersections. They are reminded to begin crossing the street on "Walk" signals, never on a solid or flashing "Don't Walk." They should use sidewalks, if none are available, walk facing traffic so they see vehicles, and drivers see them. Drivers should stop for pedestrians at crosswalks and intersections, refrain from blocking crosswalks when stopping at intersections, slow down and obey the posted speed limit, never run red lights and be careful when passing stopped vehicles.

Saaraa Farooq. Saaraa Farooq, yes, she has an abundance of A's in her name, just don't ask what her middle name is. She can be found watching Doctor Who, listening to music (ATL, The Beatles, ARTTM, rock, alternative, and all that good stuff...), or taking pictures of … More »