The iPad currently reigns supreme in the tablet world. However, Microsoft has recently revealed the Surface, its newest entry into the tablet world, which just might outshine the iPad in the near future. Surface combines the highly anticipated Windows 8 operating system with new tablet hardware and software capabilities.

The iPad and Surface look visually similar, but the Surface's built-in kickstand trumps the iPad's Smart Cover. Buying separate components, like the Smart Cover, are pricey and can be easily lost. It seems logical that a tablet should come equipped with its own stand. 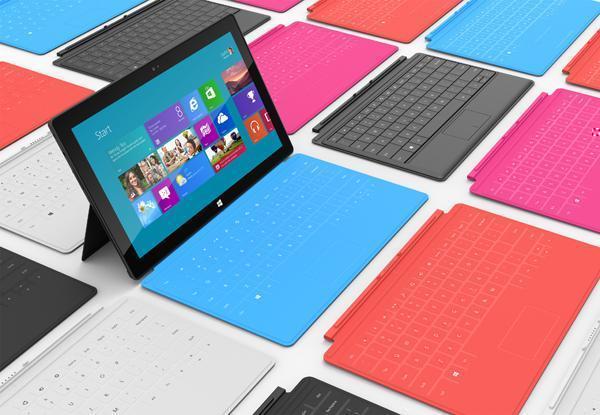 Photo: Surface Pro claims to be fully-functional as a Windows desktop, with its Microsoft Office capabilities and snap-on keyboard.

Photo: Surface Pro claims to be fully-functional as a Windows desktop, with its Microsoft Office capabilities and snap-on keyboard. Photo courtesy of Digital Trends.

The one thing that makes me skeptical of tablets in general is that I can't imagine myself using one to do serious work. The iPad has a screen keyboard, but it fills a large part of the screen and seems awkward to use. With my somewhat clumsy fingers, this virtual keyboard presents a challenge when typing. One of the reasons I like the Surface is that it offers a real keyboard and track pad that doubles as a magnetic cover over the screen.

The Surface comes with both a Touch Cover and the Type Cover. Their function is identical, but the Type Cover, which I am more drawn to, is a thin tactile keyboard, while the Touch Cover is a virtual keyboard of a touch. According to Microsoft's press release, both keyboards are more efficient than using the iPad's on-screen keyboard. The Surface offers a variety of vibrant colored keyboard/covers, my favorites being hot pink and blue.

However, I wonder about the cover and kickstand's durability and comfort on my lap. The idea of lounging on the couch with a flimsy kickstand seems uncomfortable, and I would be worried the tablet could easily fall.

Microsoft also emphasizes the Surface's hybrid qualities as a tablet and a PC in one. There are two Surface models available: Windows RT and Windows 8 Pro. Both have Microsoft Office installed. The Pro has full Windows 8 capabilities, while RT is a "lite" version. The Pro will be able to upload documents, hold up to 128 GB and run full desktop programs such as Photoshop. In comparison, the iPad can only hold up to 64 GB and does not run Office natively. In order to rise above Apple's iPad, Microsoft CEO Steve Ballmer must keep Office solely for the Surface.

As an avid Apple lover who has grown up using Mac operating systems, it's going to take a lot to pry me from my MacBook Pro. Since the Surface will be using Windows 8, I would have to familiarize myself with an entirely different operating system if I would be seriously considering owning one.

Microsoft seems to be on the right path to a comeback with this tablet, but I'm not willing to jump to that conclusion just yet. Windows 8 seems like a work in progress. When the president of the Windows and Windows Live Division demonstrated the Surface at Microsoft's press conference, his device froze and he was forced to grab another one in order to continue his presentation.

Despite no specific price and release date mentioned, the Surface suggests that Microsoft is back as a top contender in the tech world. Surface has new and unique hardware distinguishing itself from the current top competing tablets, and it is on the verge of becoming the first tablet that can fully function as a desktop computer. Who knows, in time, the Surface could even be on its way to nudging out the laptop entirely.