Dr. Joshua Starr discusses the theme, "Building the Future Together"

On Nov. 12, Montgomery County Public Schools (MCPS) Superintendent Dr. Joshua Starr delivered his first State of the Schools address at the Strathmore Music Center. His speech highlighted several student achievements, pointed out areas of improvement in the education system and underscored strategies that he has been implementing to improve the MCPS learning environment. His speech focused on the theme "Building the Future Together," as he emphasized strengthening cooperation between businesses, educators and students. 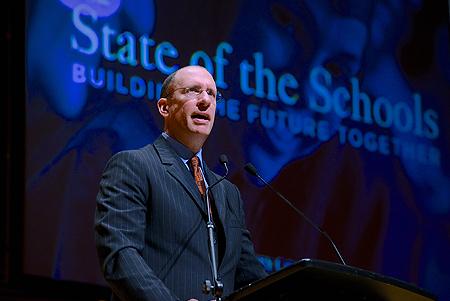 Photo: Superintendent Joshua Starr focused on "Bringing the Future Together" in his first State of Schools address.

Superintendent Joshua Starr focused on "Bringing the Future Together" in his first State of Schools address.  Photo courtesy of The Gazette.

After several introductory remarks, Starr began his speech by recognizing the leaders of the MCPS Board of Education and acknowledged their firm commitment to MCPS education. Starr's speech revolved around the central theme of "Building the Future Together" and alluded to this theme several times throughout the speech by emphasizing how students and teachers alike play a role in student achievement. "I came to Montgomery County to help chart a new path to the future, and we must be prepared to make that road by walking…We must build that future together," Starr said in the address. He explained that Montgomery County's success is driven by immense amount of opportunity available to students both inside and outside of the schools. Thus, to uphold MCPS's reputation for high achievement, Starr called for local businesses and non-profit organizations to continue to provide students opportunities such as internships to further their learning outside of school.

The first half of the speech highlighted several student successes, including a 42 percent rise in the number of Advanced Placement (AP) classes taken by students from 2006 to 2011, the high number of Intel Science Fair and Siemens Competition winners in MCPS and the $240 million in scholarships awarded to the Class of 2012.

Starr also referred to his experience of shadowing Gaithersburg High School senior David Hayes a few weeks ago. He congratulated the principal of Gaithersburg High School by pointing out the steps the school took to motivate Hayes and help him discover his interest in teaching. Starr used the example of Hayes to steer towards his own plan for improving MCPS education. "Our district is filled with students just like David and his peers — young men and women who, with the right support and direction, are destined for success. They just need the opportunity…And we — we — are the opportunity for our children," Starr said.

Starr named other instances in which students have shown improvement. For example, he attributed the 38 percent improvement in South Southlake Elementary School's fifth-grade English Language Learners standardized math test scores to a stronger collaboration between educators and students. "This success is a direct result of our great school leaders and educators who have broken down barriers to access and opportunity. I believe with all my heart that MCPS has the best staff in public education," Starr said.

"I believe with all my heart that MCPS has the best staff in public education."
He then explained that a large contributor to these successes is MCPS's ability to provide students with countless opportunities. He named a man from El Salvador who came to America and sent his two sons, one of who is now majoring in business, to study in MCPS. In citing this example, Starr emphasized how MCPS has proven to give young people the opportunity to succeed academically and in the job market. However, he also stated that the opportunity needs to be more widespread. "Passion, knowledge, vision and skill need opportunity to thrive. And those opportunities, quite frankly, have not been distributed evenly over the years," Starr said.

With this example, Starr segued into the several areas in which he believed MCPS needs improvement. He especially stressed the importance of bridging the education gap among various groups of students. "Yes, we are leading the way in graduation rate, but we must recognize that an African American or Hispanic ninth grader is three or four times more likely to drop out before graduation than a White or Asian student," he said.

Starr then explained how he planned to work on bridging this gap in opportunity. One of the highlights of the speech was when Starr pointed out that success stems not only from academic achievement, but from communication ability as well. In order to give the audience a better idea of his goals, Starr summarized the characteristics of the ideal student. "We need to teach them to be innovative thinkers, good communicators and creative problem solvers. They must work well in groups with people from diverse perspectives. They have to be able to apply academic skills to real problems," Starr said.

At the conclusion of his speech, Starr directly addressed businesses and industries who he feels can together work with the school community to further student achievement. "And to those of you from our school communities I am asking that you build into every plan and every program an opportunity for true family and community engagement," Starr said. "And together, we will ensure that Montgomery County Public Schools continues to provide the best public education in the country."

Missed it? The States of the Schools address will be broadcasted on MCPS TV and on the MCPS website until Dec. 16. A full schedule of the broadcast timings can be found here.