Seniors David Ma and Morgana D'Ottavi looked like a great match. Both are athletic and invested in people. David plays basketball and Morgana runs cross-country and track. Morgana wrote that her friends make her happiest, while David wrote that he enjoys "seeing others smile." Both also cited their personalities as their best traits. We sent them to Pete's A-pizza in downtown Silver Spring to see if these seniors were a match made in heaven. 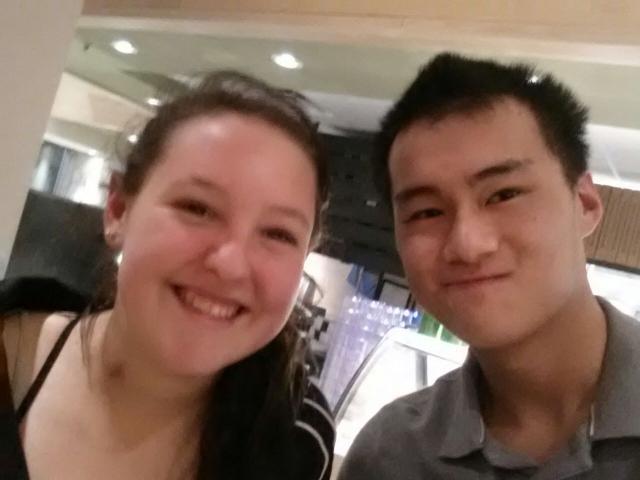 Photo: Seniors Morgana D'Ottavi and David Ma on their date.

Morgana: "I was kind of nervous because I didn't know who it was gonna be. But I was feeling okay."

David: "When I first saw her, I thought, 'Hey, I know her.' We've both gone here for four years, but we weren't really friends."

Morgana: "I actually knew him. I was scared I wasn't going to know them at all and then it was going to be awkward and we wouldn't have anything to talk about, but it was all good."

David: "The greeting wasn't awkward. We were both just like, 'Hey, how's it going?' "

Morgana: "My favorite part was probably the food. We shared a pesto pizza. It was really good, but we also had some really good conversation."

David: "We talked about a lot of stuff like college, favorite TV shows and what we do for fun."

Morgana: "We found out that we both like sports and studying and we have some friends in common."

David: "Sometimes it was awkward, but it was mostly smooth overall."

David: "I think she had a good sense of humor. [She] was nice, intellectual, a conversationalist."

Morgana: "I'd say he was friendly and outgoing."

David: "I think it went all right, but there were definitely some noticeable silences."

Morgana: "I didn't really feel any chemistry, if it was there, but I think we have great friendship potential."

They agree that a second date isn't likely, but with any luck, a beautiful new friendship has blossomed--just in time for them to leave for college.