LoveSCOpe: Can a bowling date lead to a lucky strike?

Senior Arnelle Kodjo and junior Haki Johnson seemed like they'd get along great. Arnelle noted that her best friend would describe her as "easy to converse with," and Haki stated that his would describe him as "nice and easygoing." Both wrote that having fun made them happiest, and Arnelle wrote that she'd prefer bowling or mini-golf, so we decided to send them to White Oak Bowling Alley in Silver Spring. 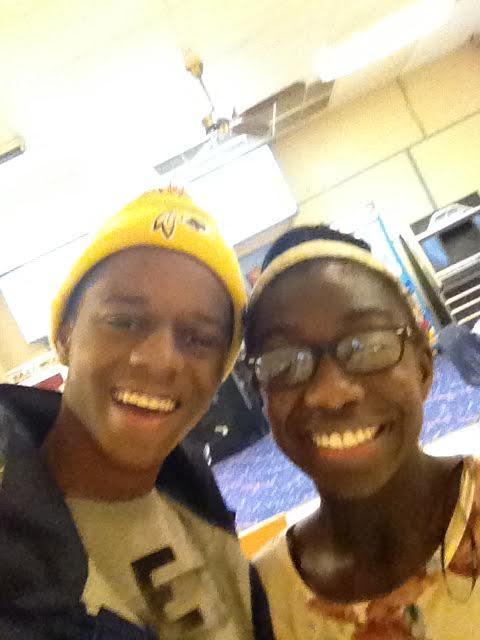 Arnelle: "I wasn't super nervous, I felt pretty chill about it. I got worried when he was there kind of late."

Haki: "I got there 30 minutes late because my parents couldn't drive me there on time. When I got there, she was playing one of those arcade games. We said hi. It was a little awkward."

Arnelle: "I was playing the race car game in the arcade because I was bored and I got a little worried when he was there kind of late. He seemed nice. I've never met him or seen him. He walked in and explained why he was late. He was really nice and it wasn't awkward. It wasn't a lot of pressure."

Haki: "It was a little awkward because there was no one else there. It was just me and her and the other people who worked there."

Arnelle: "We both wanted to do mini golf. I lost the game, but he was the best bowler in the world. I lost pretty bad. My first two times I got zero. It was really bad. But I did catch up and almost won. We mostly just bowled and talked a little bit. We talked about track and Biology because I have the same teacher as him."

Haki: "Everything seemed pretty easy, the conversation wasn't all that awkward. [We talked about] school, track, bowling. My favorite part was winning at bowling."

Arnelle: "We went to get ice cream afterwards from Sweet Frog. That was really chill, but I made him try something that turned out to be really nasty, so I felt kind of bad about that."

Arnelle: "I left with my friend Rachel. I think we could be friends; maybe we'd go somewhere past that. He's cool and I'd definitely be friends with him. I haven't really talked to him, but if he was willing to go on a second date, then maybe."

Haki: "[She seemed] fun, entertaining, funny. She was really cool."

Arnelle and Haki talked a little in the hallway the next day, but haven't spoken much since. Though no second date is currently in the works, you never know—there's still time to strike!