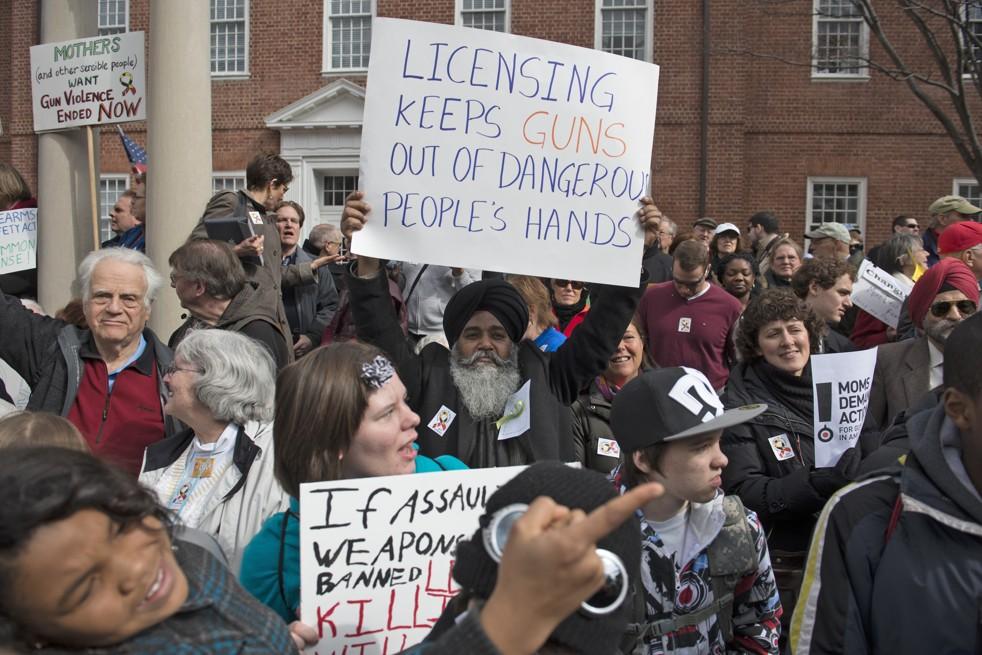 Photo: Over 2,000 people showed up to a gun control rally in Annapolis on March 1.

Photo: Over 2,000 people showed up to a gun control rally in Annapolis on March 1.  Photo courtesy of Marvin Joseph/The Washington Post.

According to the resolution, the committee affirms its support for the National PTA policies of reducing gun violence, which includes restrictions on internet firearm sales, a federal ban on non-sporting ammunition and a minimum age of 21 to purchase firearms. In addition, the resolution supports a federal ban on non-sporting ammunition. The resolution also states that MCCPTA plans to work with other groups, both local and nationally, including local PTAs and the Maryland State PTA. The push for a resolution on gun control, initially started by the Takoma Park Elementary School PTA's School Safety and Sensible Gun Policy Committee, was spurred by the Dec. 14 shooting in Newtown, Connecticut. "The shooting in Sandy Hook, I think, affected everyone, and it affected me," Feigen said. Many people decided to advocate for stricter gun control after the incident, which resulted in the deaths of 20 elementary school students and six adults. "Parents wanted to get involved after the Newtown shooting," Schonberg said.

Schonberg, an alumnus of Sandy Hook Elementary School, hopes that the resolution will not only improve general safety but also reduce the amount of guns in circulation. "I'm less concerned about the possibility of a mass shooter coming in because it's so rare. I'm more concerned about the proliferation of guns," Schonberg said, citing the number of gun-related deaths since Sandy Hook as well as last week's murder-suicide in Takoma Park and the death of Blair student Tai Lam in 2008.

Though Second Amendment rights are usually brought up along with the issue of gun control, Feigen believes that the larger issue of gun control differs from recreational use. "They're not the types of guns you use for recreational target shooting or skeet shooting, these are weapons that are designed for military purposes and to kill large amounts of people in a short amount of time," he said. While there is some opposition to the resolution, Feigen does not believe it is enough to stop the MCCPTA from passing it.

Schonberg believes that passing the resolution in Montgomery County could also influence other areas in the state. "Because [Montgomery County Public Schools] (MCPS) is a big school system, we're influential," she said. "It's helpful to have MCPS PTA take a position."

On March 21, the MCCPTA delegates will discuss and debate the issue before the vote on March 22. Feigen believes that most parents will recognize the importance of the resolution. "My guess is that parents understand that this is a basic safety issue, and we're not trying to take anyone's guns away," he said. "We're just trying to have a sensible gun policy."

Executive Director Adam Maisto interviews a Blair student and teacher, in the aftermath of the shooting. (Jan. 12, 2013)

#3 - After Sandy Hook by Bncradio on Mixcloud