It's time to sit up straight!

In 2019, the Washington Post reported that the average teenager spends eight hours a day sitting, even more than the average American adult. Different factors, from homework to increased computer usage, have led to an increasingly sedentary lifestyle, but the negative impacts of sitting so much are not always clear.

Today, as students hunch over their homework packets and devices, bad posture is unknowingly often the result. Blair junior Daniel Mehari explains how easy it is to unconsciously slip into bad posture while working. "My eyesight isn't too great, so I have the habit of getting really close to the paper, which results in me having bad posture sometimes," Mehari said.

And while students may feel as though bad posture isn't a big deal beyond intermittent back pain, it can be. In fact, bad posture influences both physical and emotional health in lasting ways.

According to the Daily Herald, one in three preteens or teenagers report back pain every year. Though in most cases the pain is not severe, it can lead to a variety of health issues such as chronic back pain, poor circulation, headaches, and fatigue. 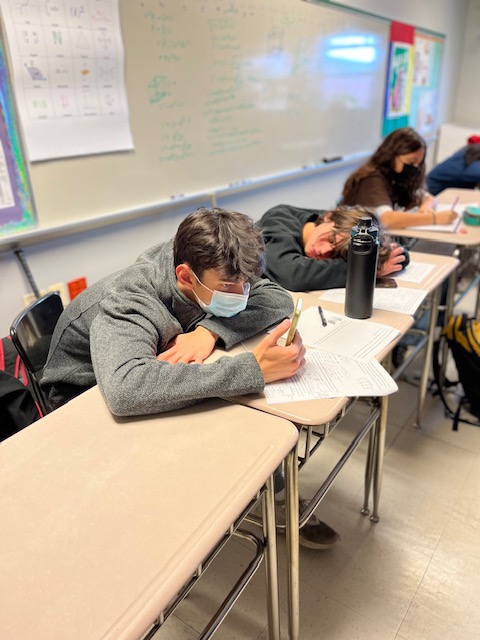 Photo: Students' sitting positions can impact their postures and health

Not only does good posture tend to lead to more positive moods, but it also brings people a sense of higher self-esteem. In a 2014 Health Psychology study, participants in two different groups were asked to either sit up straight or slouch while giving a speech. The study found that those sitting upright reported higher self-esteem, better moods, and higher alertness.

Exercise, like yoga, can improve sitting posture. Mehari discovered that working out at the gym and practicing deadlifts improved his posture. "Some people pointed out to me that my posture had improved after I started deadlifting. But when I stopped working out due to time constraints, I quickly fell back into having bad posture," Mehari said.

With both physical and emotional health benefits to having good posture, it is certainly worth the effort to try and improve it. Whether through exercise or just simply remembering to sit up straight, every little difference counts!


Joy Song. Hi! My name is Joy, and I'm a staff writer. Apart from writing for SCO, I enjoy reading and listening to music. More »