Gwendolyn Elizabeth Brooks was an inspirational African American women who certainly deserves recognition as one of the most influential poets of the 50s. Born in Topeka, Kansas in 1917, Brooks was always chasing after her passions to become a poet. Her father, a janitor who dreamed of being a doctor, and her mother, a schoolteacher, and pianist, were always supportive of their daughter's love for reading and writing.

Brooks was only 13 when she published her first poem, "Eventide," and by the time she was 17, her poems were frequently being published in a newspaper serving the African American community of Chicago. 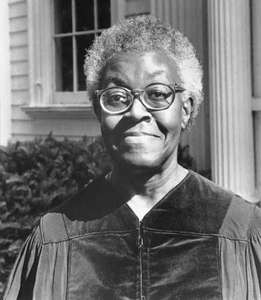 In 1950, she became the first African American to receive a Pulitzer Prize, for her poetry book "Annie Allen." A beautiful portrait of the life of the black urban poor, this book of poetry combines free verse, sonnets, and other models to portray Brooks’ experiences as a black girl growing into adulthood. She expresses the prejudice she faced not only from white people, but also from lighter-skinned African Americans throughout her works of poetry.

Her ability to interweave her activism into beautiful works of literature and her commitment to her political and cultural identity have made Brooks one of the most influential African American figures of the 1950s.