A step in the right direction

On April 7, a series of "Ayes" and "Noes" resound in the North Wing of the Capitol building as the clerk calls roll for a historic vote to take place in the two-story Senate Chamber. The senators of the 117th Senate voted 53-47 to confirm Justice Ketanji Brown Jackson as the first black woman in the United States Supreme Court.

Replacing Associate Justice Stephen Breyer, Justice Jackson will be the 116th Justice to sit on the Supreme Court. Although she won't change the 6-3 ideological makeup of the Supreme Court, with her addition, the Court will have an unprecedented four female justices.

Her confirmation leads to a Court that is more representative of the American population, a change that is long overdue. Jackson is only the third black justice after Thurgood Marshall and only the sixth woman.

Born in Washington, D.C. and raised in Miami, Jackson attended Harvard for both undergraduate and law school, during which she was the editor of the Harvard Law Review. In her law career, she clerked for three judges, including once for Justice Breyer. Before her nomination, she served as part of the U.S. Sentencing Commission for five years, as part of the U.S. District Court for the District of Columbia for eight years and as a United States circuit judge for the U.S. Court of Appeals for the D.C. Circuit for one year. As part of her legal career, she has also served as an assistant public defender, and she will be the first Supreme Court justice to have this background.

Yet, despite her extensive qualifications, her confirmation and nomination have been riddled with controversy. President Joe Biden nominated Jackson on Feb. 25, but Republican Senators filled her hearings with pointed attacks.

For instance, senators asked some of the most absurd questions. They included questions from Senator Marsha Blackburn's (R-Tenn.) ‘can you provide a definition for the word ‘woman’?’ to Senator Lindsey Graham's (R-S.C.) ‘what faith are you, by the way?’.

Robyn Gopin is a former lawyer and teaches two of Blair's justice classes, Introduction to Justice on Society and Contemporary Issues and Justice on Society. She thinks that they weren’t so much questions about Jackson's qualifications as they were statements about their perspective on certain topics. “To me, it seems like a lot of people are just using it as a platform to reach out to their constituents to show where they stand on the issue… It’s a bit of a farce,” Gopin says. 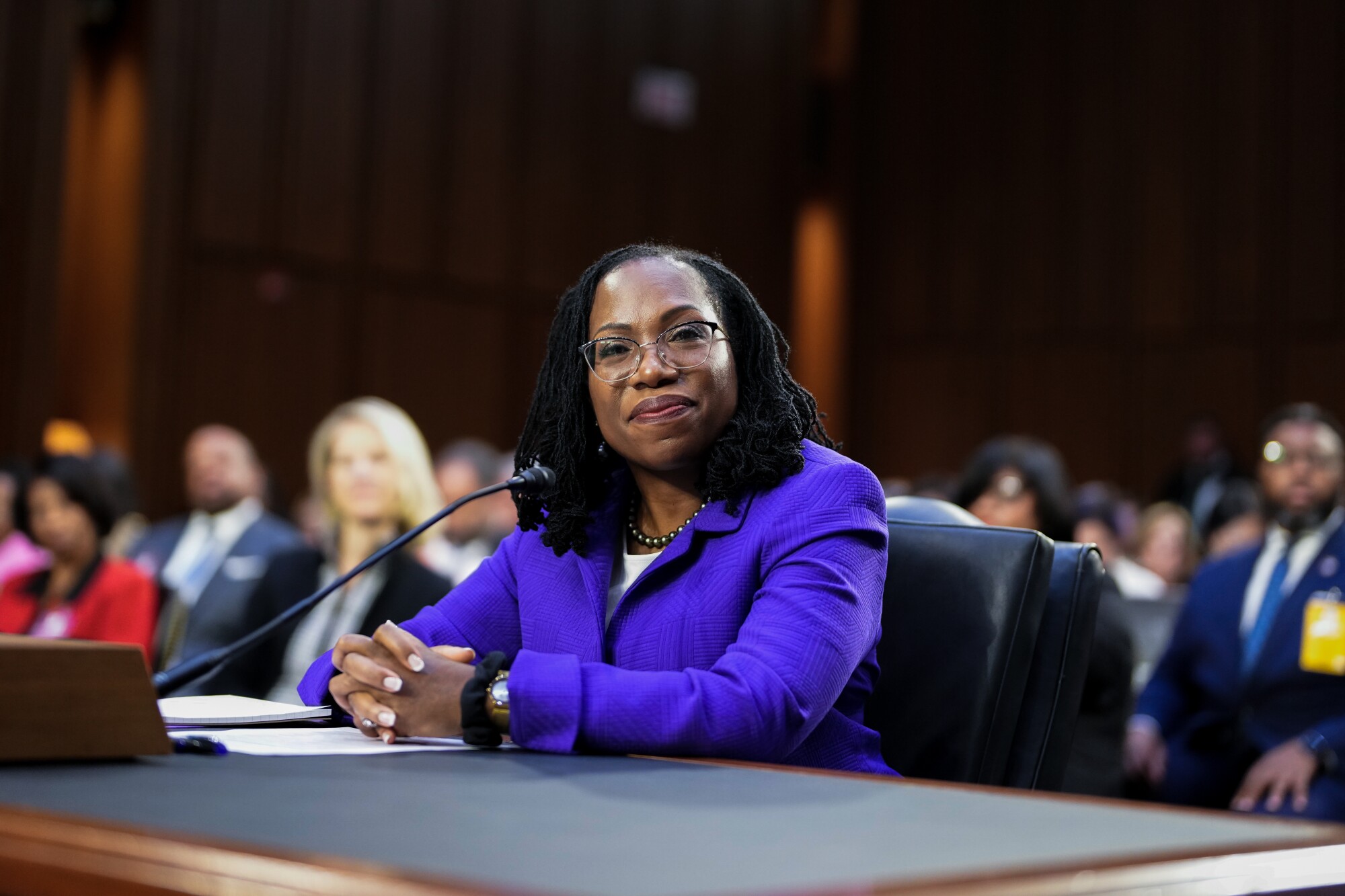 Ketanji Brown Jackson appears in Senate for her confirmation hearings. (Photo Courtesy of Kent Nishimura of the Los Angeles Times)

Furthermore, the senators frequently didn’t give Jackson a chance to answer their questions fully. Republican Senators, particularly Sen. Ted Cruz (R-Fla.) and Sen. Graham repeatedly interrupted her. Watching clips of the hearing, sophomore Mekides Dixon remarks on the proceedings. “She's not even allowed to say [anything] because they keep throwing shots at her,” Dixon says.

The hearings for the judicial nominees began in 1916 and only became televised after the nomination of Sandra Day O’Connor in 1981. Since then, the process has become more and more politicized. Andrea Maples, who teaches Law and Administration, comments on this gradual change. “It's problematic that the nomination process has become so politicized, that it makes a court appear political. The courts are not supposed to be political,” Maples says.

Though increasing partisanship may be a large factor influencing Jackson’s hearings, her identity as a black woman also plays a part. Sophomore Lucy Dow Paterson believes that the intersectionality of Jackson’s identity partly influences the senators’ reactions. “If it was a white Democratic woman there probably still would have been some attacks, but it would not be like this,” Dow Paterson says.

However, in spite of this, some republicans walked out after the result of the vote was announced, when the rest of the chamber erupted in a standing ovation. Sen. Rand Paul (R-Ky.) didn’t show up for the confirmation hearing, delaying the final vote by over 20 minutes. Eventually, he and Sen. Graham voted ‘no’ from the cloakroom, as they were dressed in casual clothing.

Dow Paterson thinks that the Republicans may have been trying to keep the confirmation from happening through their discourteous actions. "It was super disrespectful of them and also embarrassing for them, " Dow Paterson says.

Still, as Senate Majority Leader Chuck Schumer (D-N.Y.) puts it in his introductory speech, April 7 was “a joyous, momentous, groundbreaking day,” for the confirmation of a justice that “encapsulates the three Bs: brilliant, beloved and belongs.”

Jackson's confirmation is a step in the right direction for a more representative court, but one that should have taken place decades earlier. As Sen. Schumer puts it, ”This milestone should have happened generations ago—generations ago—but we are always trotting on a path towards a more perfect union.”