Blair's varsity co-ed volleyball team suffered a dramatic loss to boulevard rival Northwood in its highly anticipated first home game of the season. The team left the court defeated after three quick sets, with a score of 25-23, 25-14, 25-10. Loss of confidence, inexperience and lack of communication throughout the game contributed to the staggering loss. 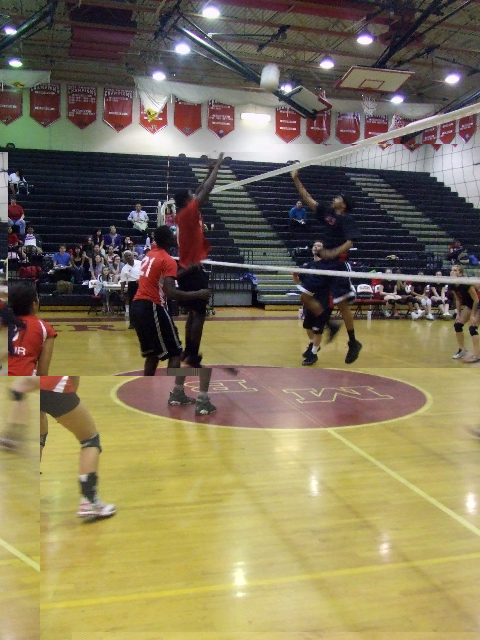 Photo: Though Blair lost the first set by only two points, Northwood dominated the last two sets and quickly ended the match.

Though Blair lost the first set by only two points, Northwood dominated the last two sets and quickly ended the match.  Photo courtesy of Evan Horne.

During the first set, the teams stayed neck-and-neck, with the Blazers losing by just two points at the very end. After this setback, Co-captain Libby Wei sensed a loss of confidence that would eventually cause the team to give up the next two sets by much greater margins. "We had a lot of energy in the beginning, but that went down," she said. "The close loss made them think they couldn't do it."

As he expected in his first game with the team, coach Chris Klein saw more inexperienced players abandoning their positions out of nervousness. Gaping holes in the court made easy targets for Gladiators, costing Blazers a huge number of points.

Seniors Pape Koite and Victor Ekunseitan proved to be two of the most cohesive members of the team, blocking hard hits flying far over the net. The pair, both over six feet tall, forced Northwood's players to tip the ball over, giving Blazers time to set up hard-hitting spikes. Klein, ecstatic about the two seniors' performance, said that they may be the strongest blockers in the county.

Other players amidst a sometimes unorganized court included sophomore setter Lizzy Liu, a new addition about whom Klein was rightly optimistic in the beginning of the season, and junior Rachel Chen, whose series of heroic saves led to a steep comeback in the second set.

Yet overall, Klein saw players generally not knowing where to be on the court. Captain Nika Lilley, on the sidelines with a foot injury, agreed. "I saw a lot of sloppy playing out there," she said. "They need to learn where to be."

Another issue Klein and Lilley saw from the bench was a lack of communication. Compared to the Gladiators', the Blazers' side of the court remained relatively quiet through the game. This was evident mostly in the last set, where easy saves, balls tipped over the wall created by Koite and Ekunseitan, were lost due to players' confusion over who would dig the ball.

The Gladiators' superior experience and cohesiveness overtook Blair's athletic potential. Keeping players on the same page and working together was an issue players foresaw before the season started, and arose during the game.

Klein sees the heavy loss as an opportunity to strengthen the team's training. "In practice, we know now what level we need to be at," he said. "It's time to get serious."

The coed volleyball team will play their next home game on Friday, Mar. 25 against Poolesville at 5:15 p.m.