Felica is the G.O.A.T for a reason 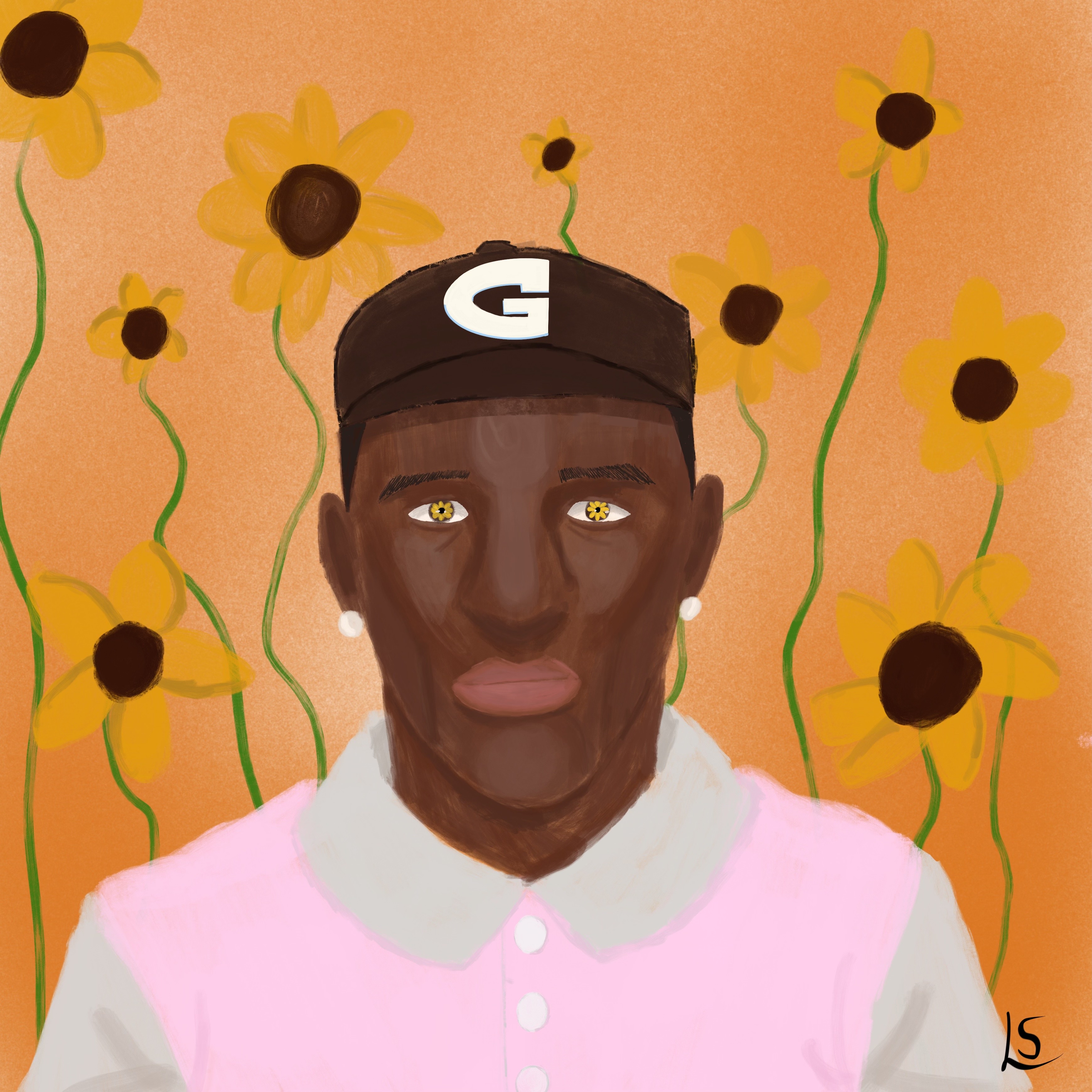 Tyler the Creator has gone from eating roaches with a Supreme five-panel cap to eating french vanilla ice cream on a yacht with DJ Drama. His albums are only getting better, and he consistently releases great music and still builds upon it - something extremely rare amongst musical artists. Artists like Tyler are rare in general: those who fuse genres or try new things musically and still flourish on the charts.

Fans have been noting Tyler’s growth as an artist ever since the release of his third and best album, Wolf. He isn’t only advancing sonically, but the content in his lyrics is also maturing. Earlier songs like Tron Cat contain shock content to gain exposure, and he has evolved from that into an introspective tone that discusses issues like unrequited love.

Tyler takes on the role of characters in his songs; he has multiple characters in albums like Wolf (2013) and the differences in his characters throughout the years reflect his growth as a person and artist.

Take a look at Goblin (2010) to see a young 20-year-old Tyler trying his best to get noticed as a legitimate rapper. Listen to "Transylvania’s" lyrics and discover him delving into the role of a perverse and sexist vampire. Listen to "She," and discover him putting on the mask of a suicidal/homicidal teenager who's madly in love.

Goblin’s lyrics don’t reflect Tyler’s personality as much as the albums that follow it, but they do show that Tyler had a clear goal in mind: controversy. One doesn’t get away with such violent imagery in songs without gaining some criticism, and Tyler realized early on that there’s no such thing as bad publicity. He adopts the roles of racists, sexists, rapists and other offensive characters in order to add shock value to his work; the attention that he craves as an artist is granted to him through outraged listeners who give his name some buzz even if it’s negative.

His album Wolf (2013) provides a much more polished and professional sound. He tones down the distortion of his instrumentals, but doesn’t completely abandon it; songs like “Awkward” showcase heavy distortions. The content in this album illustrates a storyline set in Camp Flog Gnaw and Tyler takes on the roles of Sam, Salem and Wolf Haley.

“Answer” is the most notable song on the album - basically a letter from Tyler to his deadbeat father. There are multiple examples of him opening up about personal hardships, like “Lone,” where he complains about his grandma’s recent death. The album shows Tyler furthering himself from the edgy horrorcore that he perfected in Goblin and embarking on a new journey of self-reflection that becomes a common theme throughout his newer music.

Mixed in with these emotional ballads, there are songs like “Tamale,” where Tyler shows that he hasn’t ditched the controversial side of himself that enticed his cult-like fanbase into listening to him in the first place. “Domo23” is the most popular song on the album, making it to third on the Billboard chart, which at the time was Tyler’s most popular song topping Yonkers.

Cherry Bomb (2015) is his most experimental album and boasts the widest variety of genres of any Tyler album, which leads to an album with high highs and low lows. The album has clear inspiration from N.E.R.D and features Pharell on “Keep Da Os."

That same experimentation led to this album being disliked amongst most of Tyler's fans. Tyler himself acknowledges the general contempt of the album in a Jarodd Carmicheal interview; “Everyone hated it. Except for, like, real music lovers who care about drums,” he explains.

Flowerboy (2017) is where Tyler’s blossoms into the world-renowned Grammy-winning artist fans know today. It’s arguably his best-produced album, right next to Igor, and it doesn’t contain as much rap as his previous albums.

Previously, Tyler addressed his hardships with an aggressive tone and confronted them aggressively in his songs. However, on this project, Tyler opens up to fans and takes a more sensitive approach with the help of past collaborators like Pharell Williams and Roy Ayers.

The topics of this album are similar to previous ones; songs like “See You Again” deal with unrequited love, but like most of the album, Tyler talks about it in a much more introspective and mature way. This album gave Tyler his first Grammy nomination and arguably, it is the album that gave him the respect he’s been searching for.

Artists use music as an outlet of expression, and oftentimes, raw emotions lead to stellar music. Tyler opens up to listeners more than usual in Flowerboy, and the audience gets a look into his raw emotions. Igor (2019) somehow tops all previous albums with synths and a British funk sound.

Igor got Tyler his first Grammy for Best Rap Album, multiplying the respect he had already obtained with Flowerboy as a legitimate artist. Although it isn’t a rap album, which leads fans to speculate Tyler has abandoned the genre that started his career, he disproves the myth that he isn’t rapping anymore with his 2021 album, Call Me If You Get Lost (CMIYGL).

Goblin, his first studio album, managed to sell 45,000 copies its first week and this is exceptional for a debut. CMIYGL amassed 169,000 album sales in a mere week, which is indicative of his exponential growth as an artist.

His jumping from genre to genre is what cements Tyler as one of the best and most popular artists in the world. His uniqueness is what attracts his fanbase; he is always doing his own thing, straying from the mainstream, and despite this avoidance of the mainstream he still manages to achieve massive success.