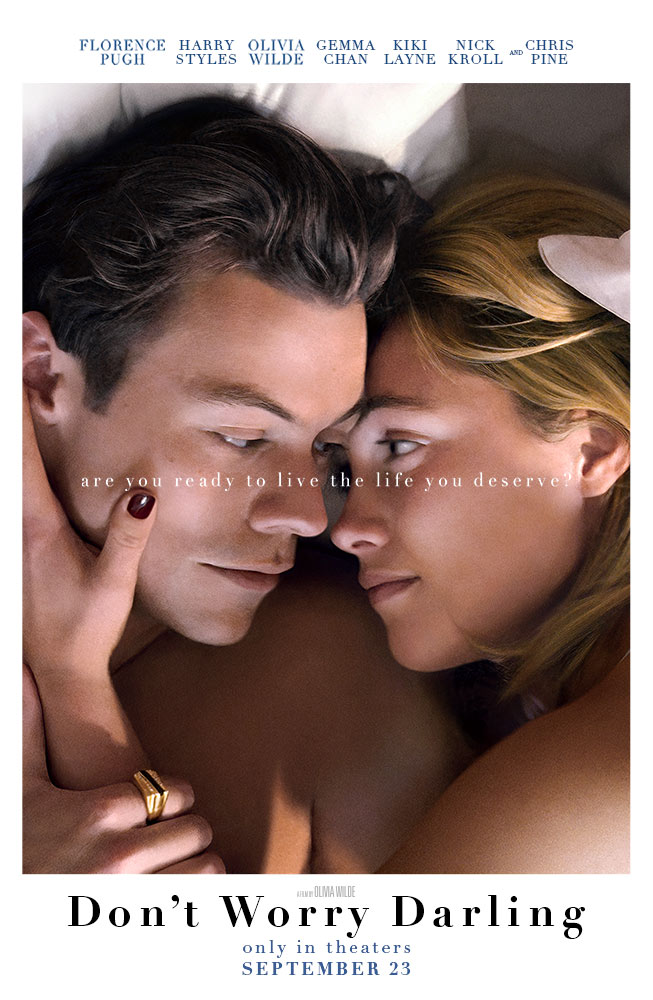 Psychological thriller “Don’t Worry Darling,” released Sept 23, is as empty as the housewives the movie criticizes. The story has incredible potential but is held back by its lackluster writing, resulting in a slightly above-average thriller with great cinematography and a frustrating plot.

This movie follows actor-turned-director Olivia Wilde’s debut film, “Booksmart,” (a comedy released in 2019) which was met with stellar reviews and had fans and critics looking out for her next move. Unfortunately, Wilde's newest movie falls short and only adds onto the pile of stale A24-wannabe thrillers coming this year despite having a budget five times as large as her first production.

Before long, Alice starts picking up on some strange discrepancies in her memory, her neighbors, and the actions of those in power. With nobody she can trust, Alice sets off on a journey filled with twists and turns to discover the dark secret lying under their “utopia.”

When “Don't Worry Darling” does things right, the numerous redeeming aspects of the movie shine through.

An engaging premise hooks viewers in right from the beginning with constant hints that something is not quite right in paradise, which keeps the audience on their toes and engaged. Overall, the premise does a great job of building tension and setting the overall tone of the film.

The A-list cast is also one of the biggest pulls of the movie, with Harry Styles and Chris Pine being two of the biggest names attached to the film. That said, the performances by these two famous figures couldn’t be more different. Pine plays the “evil cult-leader” role extremely well; his cold blue eyes perfectly suit the shallowness of his character and he very easily slips into the mold of a working white man in the 1950s. Conversely, Styles sticks out like a sore thumb; he is able to meet the bare minimum and deliver his lines, but fails to truly dedicate himself to the role.

As the star of the show, Florence Pugh absolutely kills her role as Alice. Pugh has previously demonstrated her talent in other hit psycho thriller movies, such as Midsommar, and she did not disappoint this time. She understands the overall hypocritical tone the most out of the rest of the cast and manages to carry the film with her captivating performance.

The ethereal look of the film is spectacular and outshines everything else. Star cinematographer Matthew Libatique, known for “Iron Man”, “Black Swan” and “A Star Is Born,” does a great job with the camera work. Every shot is cinematically beautiful, as Libatique is able to make a seemingly pristine setting feel quietly nauseating, adding to the suspenseful atmosphere. Combined with a wonderfully unsettling score by John Powell that is dissonant in all the right ways, and “Don’t Worry Darling'' has all the ingredients for a truly great motion picture.

Unfortunately, "Don't Worry Darling” has just as many weak points as it does great ones.

The dialogue is disappointingly average, with some lines sounding out of place or awkward. There is a sense of blandness in the script to mimic the emptiness of the white-picket fence lifestyle, but it gets to be a bit too bland. All the minor characters speak in the same cadence, resulting in dry conversation. Side characters like Bunny (Olivia Wilde) and Shelley (Gemma Chan) aren’t nearly fleshed out enough. They have weak motivations, if any, and change their minds at the drop of a hat.

“Don’t Worry Darling”’s plot also suffers from being more full of holes than a championship golf course. Pivotal events that forward the plot pop out of nowhere and remain unexplained for the entire runtime. Additionally, many story elements are either dropped before the finale or revealed to be red herrings, leaving the ending unsatisfying and without a sense of finality.

Even worse, core messages are lazily approached and poorly executed. The film’s feminist message is obvious and is easy for the audience to digest. It criticizes men who favor traditionalism and want a certain amount of control over the women in their life. To tackle such complex topics, you need unique approaches, and “Don’t Worry Darling” only takes basic overdone thriller elements and throws them into an unexciting blender.

That isn’t to say that the film is terrible -- far from it. “Don’t Worry Darling'' at its worst is still not boring, and is an easy watch filled with familiar pop culture icons. However, similar to "The Housewives", the movie lacks originality and hides deep plot issues behind its pretty exterior.


Alexander Liu. Hi, I'm Alex (he/him) and I'll be a staff writer for SCO this year. I'm passionate about public policy and international relations. In my free time, I enjoy drawing and watching terrible rom-coms. More »