When Charlene Thomas won the Scholastic National Art and Writing Awards for young writers, she never thought she would be where she is now. With her first book “Seton Girls” published, Thomas has turned her passion into a living, something not many writers get to do.

That passion started at an early age, when Thomas would write in coloring books her parents gave her. “It wasn’t anything at the time that I actually thought, ‘Oh, I want to write books one day’ or ‘I want to be an author’, it was more so something that I naturally did for fun,” Thomas says.

She continued writing stories through middle school and high school, developing her voice and drawing her stories from the world around her. “At that time I had probably had like 25 books I had written saved on my computer, but each one got a little bit better because you learn as you go,” Thomas says.

Thomas’ experiences growing up in Montgomery County heavily inspire her writing. She realized once she left MoCo for college that the diversity found here is something we take for granted, and now she incorporates much of that into her writing. “I think every book and all media should have more stories about more people that look different and come from different places and all of that just because of how important it is to see yourself in stories,” Thomas says. 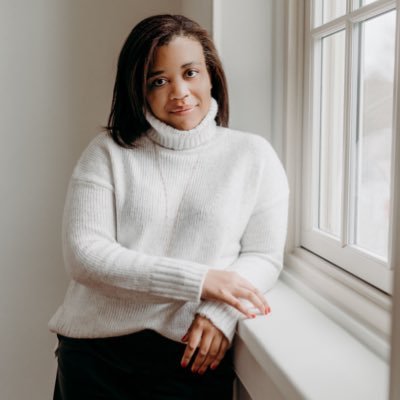 She also focuses on the lives and struggles of young people in her work. “Poker”, the manuscript for which she won a national award, is about a girl struggling to cope with her mother’s passing. Her newest book, “Seton Girls”, is about a group of friends who investigate the dark secrets of their high school football team. “I tend to write about normal people in the world facing the types of things that normal people face and figure out how to keep moving.”

Thomas was heavily involved in student journalism in high school, which served as inspiration for the topic of “Seton Girls”. She was the editor in chief of the Trojan Times, the school newspaper at Gaithersburg High School. She also interned at the Gaithersburg Gazette, a local newspaper. That was where she discovered her passion for writing, and also where she heard about the Scholastic National Art and Writing Awards. Thomas did not expect much from the competition, but decided to try her luck. “I just decided on a whim to submit to it,” Thomas says.

Thomas got a call back the next day, informing her that she had won the Silver prize for the competition, and inviting her to come to New York to formally accept it. Winning the award was a turning point for Thomas, and made her realize that writing was something she could do not just as a hobby, but for a living. “That was the first time I got any kind of external validation that maybe writing was something I could do [for a living],” Thomas says.

After high school, Thomas went to North Carolina State University, where she minored in creative writing. Although the opportunity to further her interest in writing was exciting, the differences between her hometown and college were striking. “Once I went to college… I realized that it’s kind of different here in Montgomery County, and when you move away, you start to… realize the socioeconomic, ethnic, racial and religious differences [here],” Thomas says. When Thomas went to college, she began looking for a book publisher. It was not easy to get started, though; despite finding an agent for her next book, it ultimately never sold to a publisher. Discouraged, she decided to take a break from the world of publishing and writing books. “I stopped writing for a little while to give myself a break emotionally from the experience because it can be a very emotional, rejection-filled type of process,” Thomas says. When she came back, she renewed her effort to write a book that people would read.

Her efforts led to “Seton Girls”, and this time it was a success. As a former student journalist herself, Thomas wanted to write a book that involved student journalism. “I think there is a certain authenticity or a certain way that you can kind of throw yourself into your work when you’re more familiar with some of the details,” Thomas says.

The book covers many heavy topics, such as racism, sexism, and sexual assault, but Thomas believes it is important to address these topics, especially through the lens of journalism. “These are conversations that make people uncomfortable… but we are more ready than ever to have these conversations,” Thomas says.

Since “Seton Girls” is a young adult novel, Thomas hopes that it will inspire students to speak up and be aware of injustice. “I think the written word is so powerful. I think the position of student journalist is so powerful…[it] creates a platform and an opportunity to influence and inspire people,” Thomas says.


Gabe Prevots. Hi, I'm Gabe (he/him), a senior at Montgomery Blair High School and the features editor of SCO. I enjoy biking, walking my dog and correcting minor mistakes in my stories. If you find any, let me know! More »