Geoffrey Chang, better known by his b-boy name Toyz aRe Us, stumbled upon the breaking scene by chance. When he was in middle school, he found a Tribal VHS tape of old-school skateboarding videos to watch with his older brother and friends. As they were watching the tape, the skateboarders weren’t what caught his eye – the breakers in the background were. Twenty years later, Chang is now one of the most prolific b-boys in the DMV.

Breaking, also known as b-boying, b-girling or breakdancing, is an integral part of street dance culture. The term “break” refers to dancing to the drum breaks in music, particularly hip-hop, and has roots tracing back to the late 1960s and early 1970s. Though breaking originated from Puerto Rican and African American communities in the Southern Bronx of New York City, it’s now a global community that welcomes all. 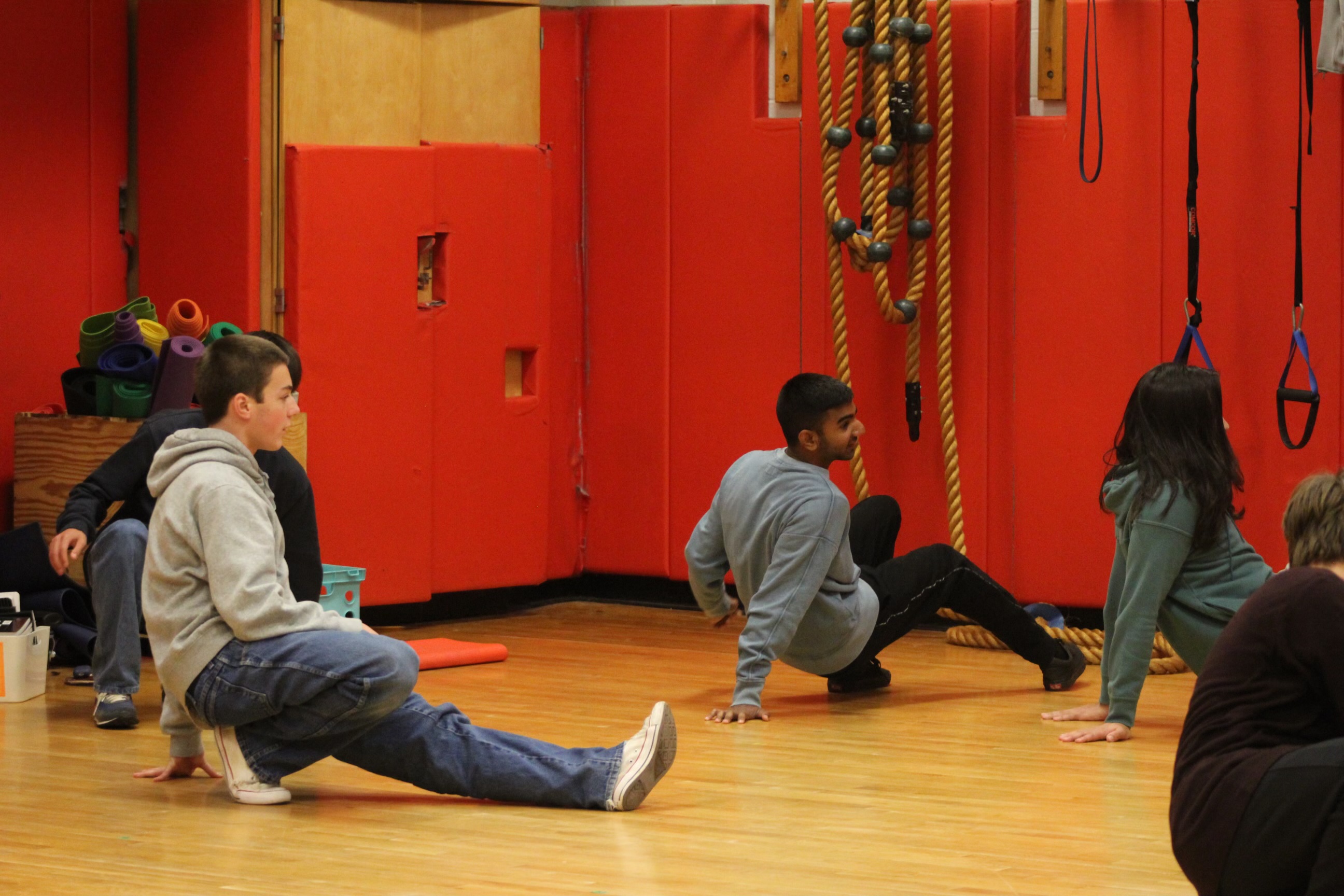 Despite the mainstream and pop culture referring to the dance as “breakdancing,” a majority of breakers find the term ignorant. Pioneers of the street dance style called the culture “breaking” or “b-boying,” which was then sensationalized by the media in the late 70s into the term “breakdancing.” Since many enthusiasts find “breakdancing” to be exploitative of the art form, the original terms are preferred by most.

Inside the wrestling room, Blair sophomore Isaac Witte flings his back on the ground, maneuvering into a back spin. Eager students watch from behind, as they aspire to spin in the same finesse.

Witte, also known as b-boy Fawzy, has been part of the culture since he was five years old. Even after dancing for a decade, Witte has no intention of stopping. “[Breaking is] just a great way to express myself. I get to listen to music and just have fun [and] hang out with friends, so there’s a great community aspect to it,” he says.

Witte practices breaking nearly every day, and regularly competes in local competitions in Montgomery County and larger ones across the nation. As a result, he is rich with experience; he’s gotten to know a diverse community of breakers from across the nation. His experience and drive landed him a position at the Lab, a breaking academy in Washington D.C., where he is a coach for kids. 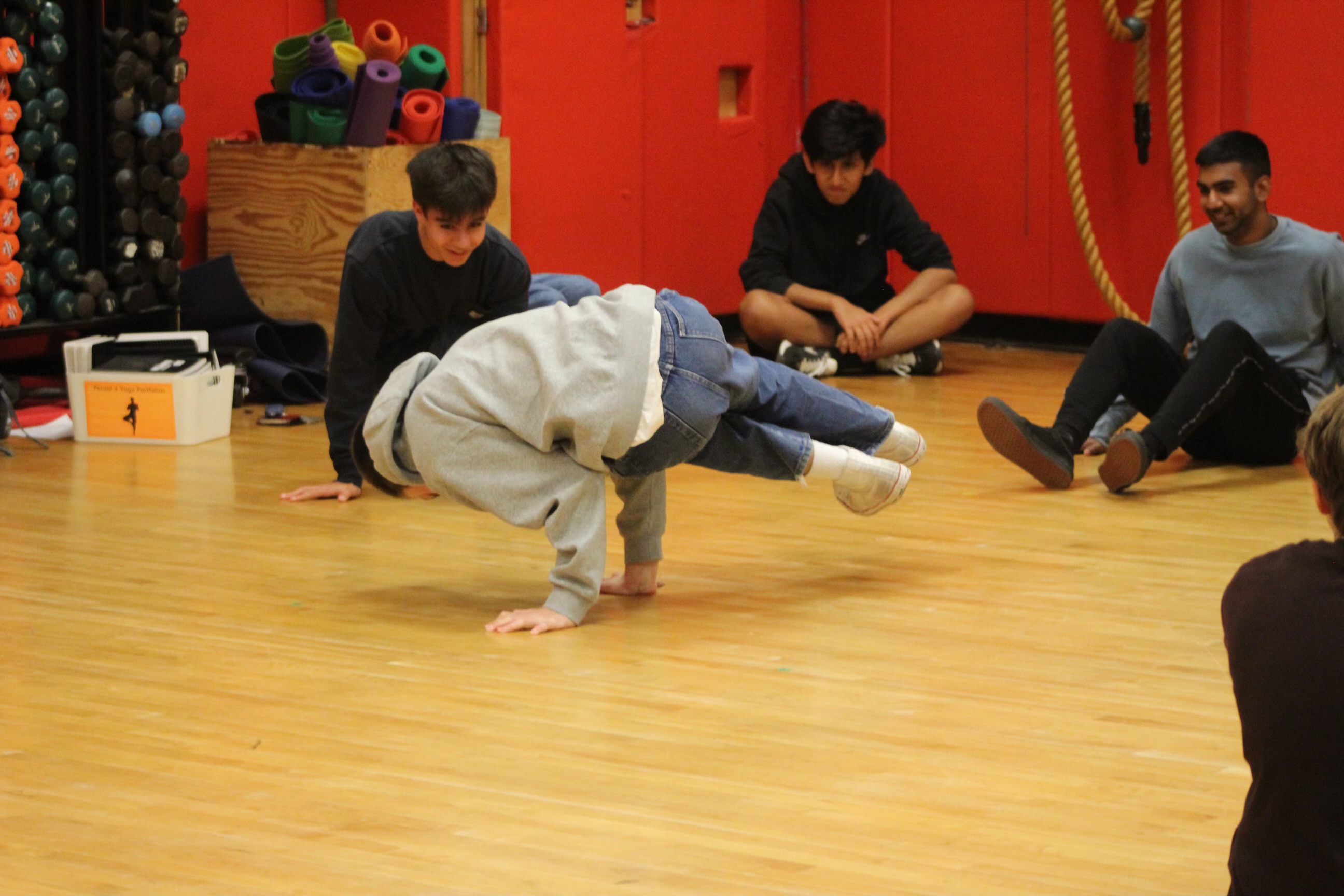 Witte started Blair Breakers for the same reason he coaches kids: his love of teaching others. “It’s a really cool opportunity to be able to pass on the knowledge I have from my years of [breaking] and pass it on to the next generation,” he says.

The Blair Breakers club made its debut at the club fair on Oct. 6, where its captains, Witte and junior Ezra Bailey, showed off their windmills and air flares on Blair Boulevard. The club members meet in the wrestling room every Thursday, where they learn moves, discuss breaking and practice for fun.

The club’s captains hope to form a band of breaking enthusiasts at Blair. “Since [Isaac and I] already dance, we thought we might bring together a small community of people to do it with at lunch, to just do it for fun,” Bailey says. Even so, many Blazers’ first introduction to breaking was at the club fair. Since breaking is so commonly confused by students with other dance styles like popping or house, the club looks to familiarize even more Blazers with breaking as a dance but also a culture. 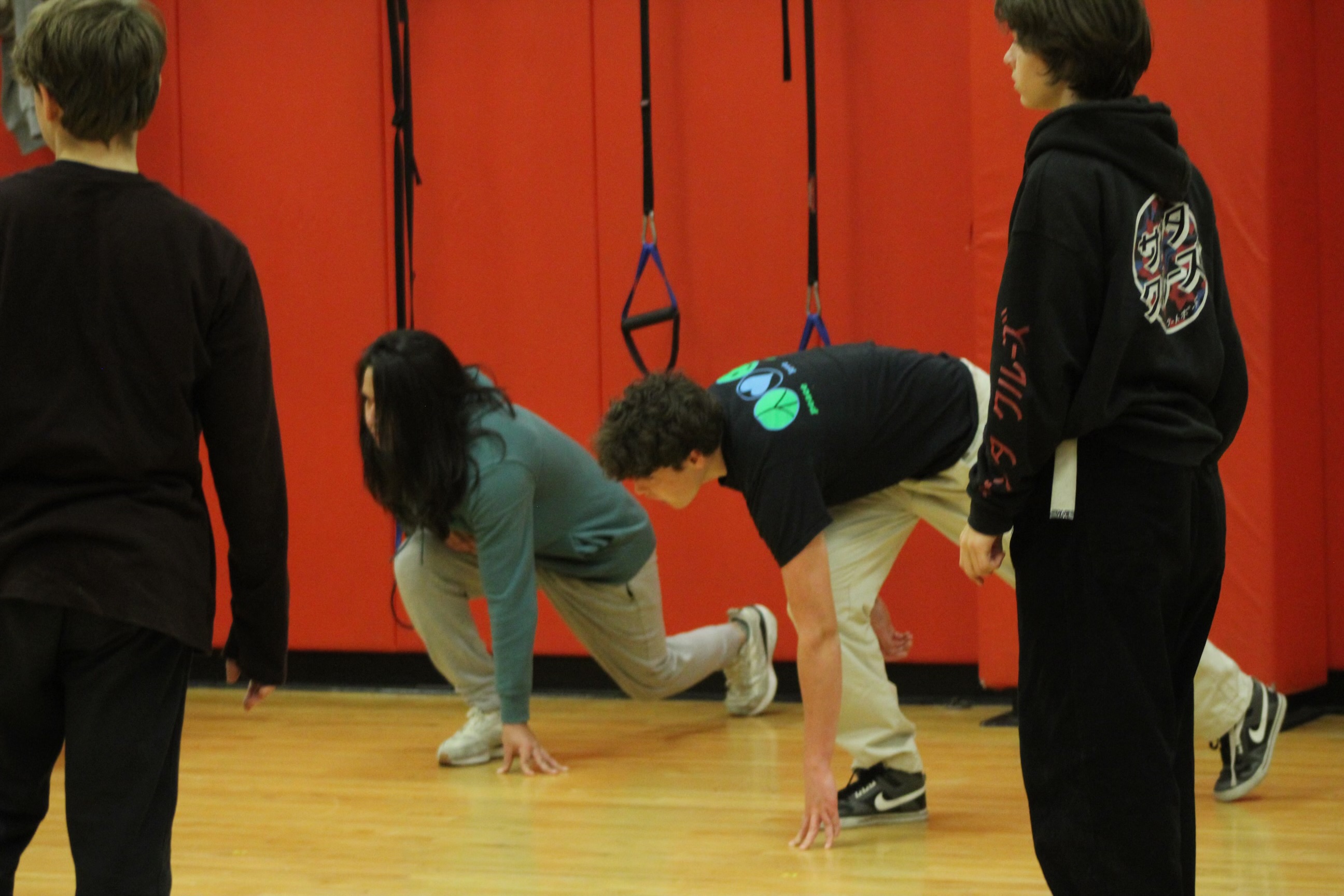 Witte aspires to show Blair how incredible breaking is with the Blair Breakers club. “My hope is that people at Blair can benefit from how awesome the dance is,” he says.

Breaking’s popularity extends to other regions of the United States – like Silver Spring. Breaking across the nation shares a lot of similar ground, but the unique culture in each region makes the genre diverse.

Maryland breaking, for instance, takes on a more abstract style, according to Silver Spring b-boy Chang. “Instead of a very standard hip-hop grit, style of approach, our area has a little bit more of a fun focus on character and creative things,” he says. Nonetheless, the DMV’s mannerisms and goofy charm have since spread to the rest of the country, adding to the stylistic diversity among the nation’s breakers.

Still, the new generation of Silver Spring breakers are trying to navigate their personal style as they devote their time to breaking. Silver Spring breakers, such as Witte and Bailey, can be found at local competitions, dance academies or jams. The Lab, for one, is a popular breaking academy with locations in D.C. and Virginia that provides programs for all ages.

Further, while contests in Montgomery County are sparse, the few that do arise bring the community together. Witte and Bailey participated in the “Last One Standing” battle at Westfield Montgomery Mall this October, but they’re still looking for bigger opportunities outside of Maryland. The two hope to pick up more experience and meet more breakers as they travel across the nation – and they look forward to doing so for “Freestyle Session,” a worldwide breaking competition held in Los Angeles.

Gliding into the spotlight

Whether underground or competitive like “Freestyle Session,” breaking is largely improvisational, through one-on-one battles and cyphers (open-circle dance jams). Both incorporate routines with moves from various influences, including martial arts, gymnastics and acrobatics. These moves make up the basic elements of breaking: freezes, powermoves, toprock, footwork and downrock. While the average viewer may interpret such moves as “cool tricks,” there’s a lot more nuance behind the culture and dance – and whether it constitutes as a sport.

Breaking’s influence has spread so far that it has become the first DanceSport event to be included in the Olympic Games. After its successful introduction at the 2018 Youth Olympics in Buenos Aires, breaking will debut on the grand Olympic stage in Paris 2024.

At the 2020 summer Olympics, skateboarding, surfing and rock-climbing athletes competed for the first time, showing the increasing prevalence of youth culture. IOC President Thomas Bach, upon the addition of said sports, wished to bring the Olympics to a broader audience. “We want to take sport to the youth. With the many options that young people have, we cannot expect any more that they will come automatically to us. We have to go to them,” he says.

Breakers will be judged on creativity, personality, technique, variety, performativity and musicality in their battles – one-on-one freestyle competitions where breakers perform their routines on beats provided by a hip-hop DJ. Technique, performativity and creativity constitute 60 percent of the score while the other three parameters constitute 40 percent. A judging panel submits their votes after each round, and the b-boy or b-girl with the highest votes is the winner.

With such a focus on creativity and performativity, the addition of breaking to the Olympics poses the question of whether or not breaking is a sport. Some members of the breaking community claim that classifying breaking as a sport will take away from it as an art form. Witte, on the other hand, doesn’t think that the concepts of art and sport are mutually exclusive, and views the Olympics as an amazing chance for viewers to get to know breaking. “I see it as a great opportunity to really show the world how amazing the art form is, and to get more people involved in it too,” he says.

Now is the perfect time to get into breaking, whether it be familiarizing yourself with videos or trying it out at Blair Breakers. Breaking is more than a dance; it’s a culture and community of diverse breakers from around the globe. To Chang, his passion for breaking boils down to community and culture. “I think a lot of people, especially from my generation and older, don't realize why they were so into breaking. It’s not just ‘cause it’s a cool dance, but it’s really the community. Especially when all those beefs happen [between breakers]… your crew always got your back. Of all the other communities out there, the hip-hop community is very dope,” Chang says.