The Blair varsity boys' soccer team (3-0) brought a hot Tuesday afternoon to a close with a 4-1 victory over Northwood (1-3). Blair remained unfazed despite injuries and their opponent's tough defensive tactics.

The first half opened with both teams struggling to find the net. Blair's strikers couldn't find a way past the offside trap implemented by Northwood's coach, and were called back by the referee more than five times in the first fifteen minutes. The Blazer defenders stayed strong on their own end of the pitch and Northwood didn't get anywhere near the goal.

In the final ten minutes of the first half, Blair's attack found a way to penetrate the defense thanks to long through balls played from the center of the field. Senior captains Jimmy McMillian and Miguel Lopez put the ball in the net with back to back goals in the 30th and 31st minutes, giving Blair a comfortable lead going into halftime.

The biggest reason for Blair's attacking success was finally figuring out how to get past Northwood's clever defensive tactics, according to head coach John Haigh, "I think we eventually broke their offside trap pretty well. It got us a few times, but overall I thought we broke that down pretty well," he said.

After that discovery, the floodgates were opened. Northwood countered with a goal of their own early in the second half, but it was too little too late. McMillian found the net two more times, once in the 53rd minute running onto another lofted through ball and the second time in the 65th minute by skillfully beating two defenders. These goals completed his hat trick on the night. 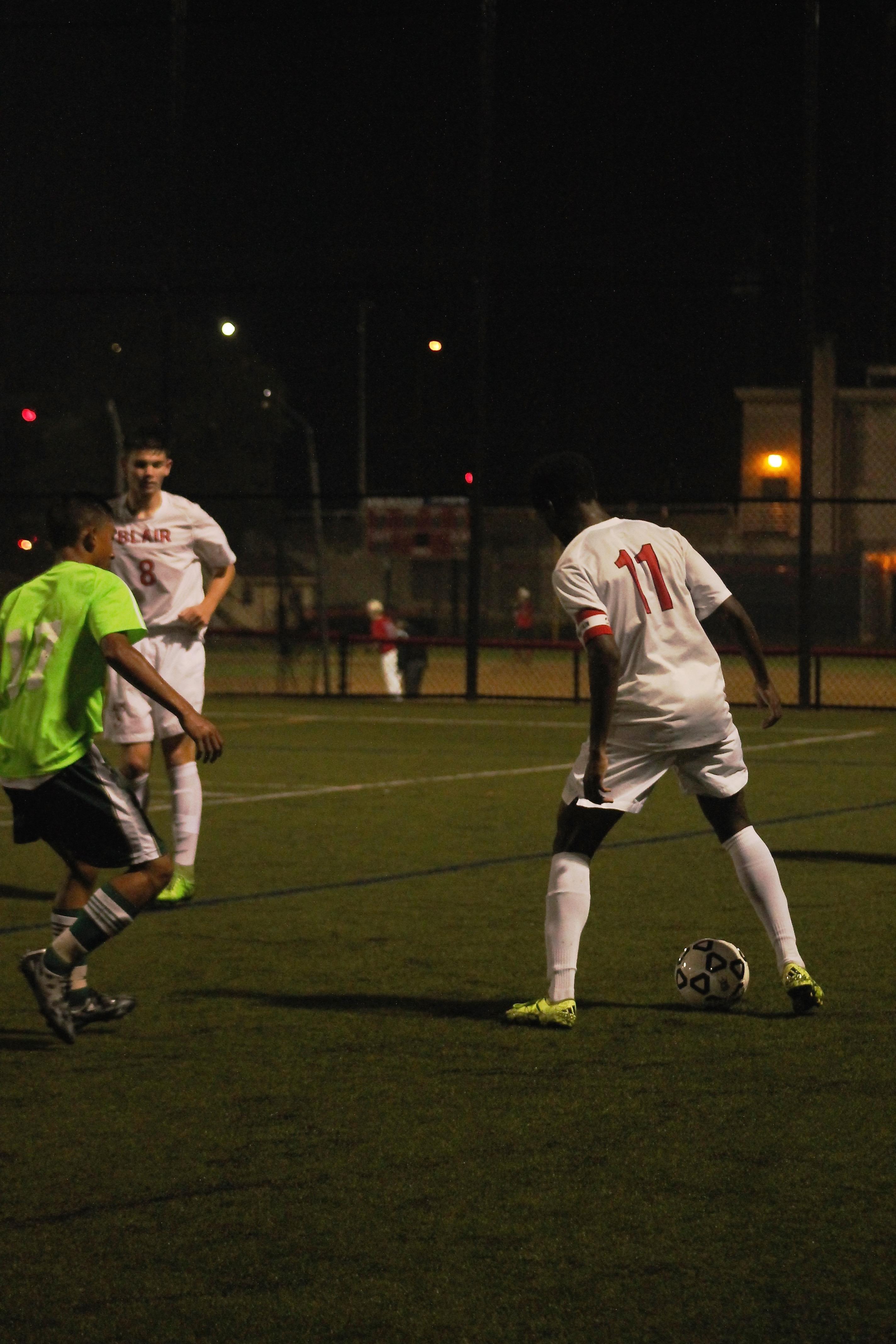 Photo: Blair's Austin Kokkinakis and Jimmy McMillian (#11) worked together for the third goal of the game in the 68th minute.

Blair's Austin Kokkinakis and Jimmy McMillian (#11) worked together for the third goal of the game in the 68th minute. Photo courtesy of Hannah Rapp.

After the game, McMillian explained his success in figuring out Northwood's defensive tactics. "We realized that they had some huge gaping holes on their defense, and we did a good job of exploiting those," he said. McMillian says that he and fellow striker Sean Munroe used their pace to create chances. "We did a good job of playing the ball through the middle and then distributing out wide," he said.

While this game is a great win for Blair, Coach Haigh acknowledged that it did illustrate a few defensive issues that the team will need to work out before clashing against some of the more competitive opponents in the league. "I think we can really improve on our defensive marking and filling gaps on defense, that's just working hard and getting back on defense. We're certainly going to work on fixing our defensive shape as a team, and that'll be our top priority in practice going forward," said Haigh.

Once these minor issues are sorted out, McMillian and the rest of the team believe that the sky's the limit for the Blazers. "We have one of the most skilled teams I've seen at Blair this year, and it's a great atmosphere to play in. I think we have a great shot going forward," said McMillian.