Blair is now 8-1 on the season

BLAZER STADIUM Oct. 9 — On a cool, drizzly October evening, Blair (8-1) scored three first-half goals and held on for a 3-1 victory over the Sherwood Warriors (2-7).

Stringing together passes on the slick turf proved a difficult task for both teams early in the match. After ten minutes, however, Blair was in the midst of what coach John Haigh called a "fantastic" midfield possession game—so good, in fact, that they were missing opportunities to take the aerial route. "We had such a nice short-possession game that when the long ball was there, they didn't always see it," Haigh said. 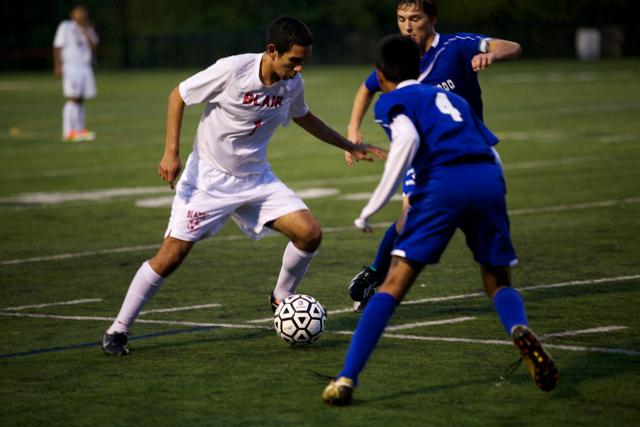 In the case of Blair's first goal, however, captain Alferid Kemal took the type of opportunity to which Haigh alluded. Out of shooting distance, he surprised Sherwood defenders by chipping the ball over their heads and into the path of Jimmy McMillian, who finished into the bottom-left corner. "Because it was rainy, the ball was [travelling] fast and nobody was getting it," Kemal said. "[Sherwood] was expecting that I was going to pass a through ball, so I chipped it."

Just over a minute later, Blair doubled their lead. From near the right sideline, Rohan Oprisko flicked a throw in with his head onto the feet of Blair's leading scorer, Ibrahima Kouyate, who, from a tough angle, struck a low shot into the far corner.

Blair continued creating chances, striking post and forcing the Sherwood goalie into a great save. Not before long, they were up 3-0. On a Kouyate corner kick, Donald Benamna out-jumped his defender and directed a header into the left corner.

With a few minutes left in the first half, Kemal played another ball over the defenders, which Benamna headed over the charging goalie and off the post. The ball landed right in front of goal, where a Warrior was able to apply enough of a touch to keep the onrushing Pablo Murga from tapping home the rebound.

The Blazers played a poised second half, not creating too many chances but surrendering few as well. 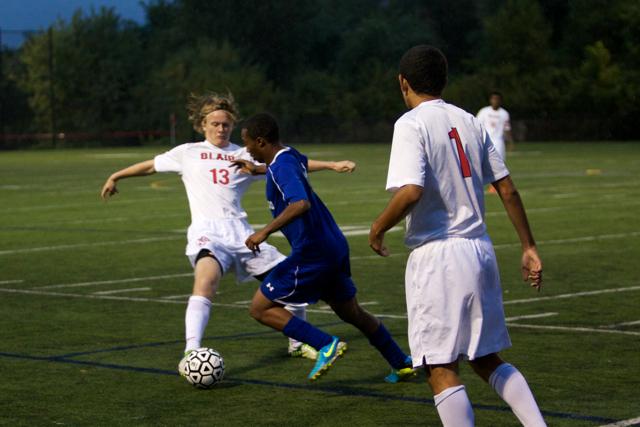 Early on in the second half, Sherwood got its first shot on target of the game. It was a free kick straight into Blair's wall. Following that attempt, Blair returned to its dominant possession game, slowing down the tempo and showing no hurry to play the ball into the box.

Eventually, when Benamna found himself on the right wing by the goal line, he delivered a low cross that skipped through the middle to Shakiel Wray, who took an off-balance, looping shot that the Sherwood goalie managed to tip over the crossbar.

As full time was approaching, Sherwood scored a consolation goal. A Blair handball just inside the box led to a successful Sherwood penalty shot.

In their four away games this season, Blair has lost once and gone to overtime twice. Their record at home remains unblemished. Despite the wet surface, the Blazers looked comfortable on their own turf. As Haigh noted, even in the rain, the team played no differently.

The Boys' varsity soccer team's next home game is against Springbrook on Tuesday, Oct. 15 at 7:00 p.m.