On April 27, seniors Elizabeth Billings, Thomas McHale and Thien Nguyendo placed second as a team at the Maryland State National History Day (NHD) competition. The team competed against over 600 other participants and will now advance to the national-level 2013 Kenneth E. Behring NHD Contest, which will be held at the University of Maryland from June 9 to June 13. 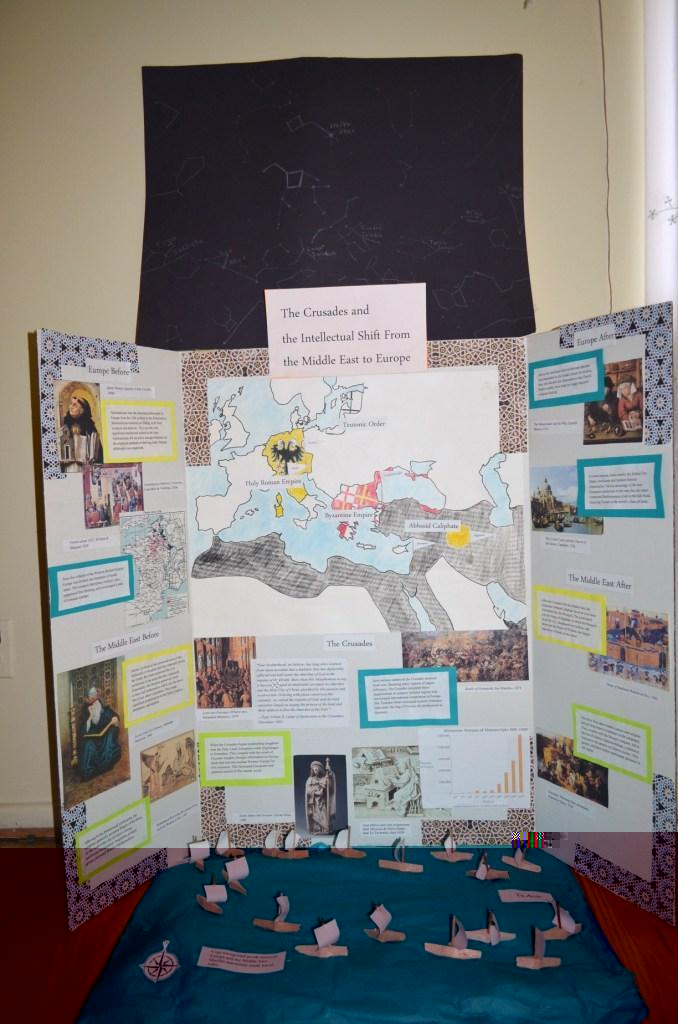 Photo: Billings's, Nguyendo's and McHale's project, above, focuses on the crusades.

Billings's, Nguyendo's and McHale's project, above, focuses on the crusades.  Photo courtesy of Elizabeth Billings.

The team qualified for this state competition by winning first place in the Group Exhibit Category in the Montgomery County competition on March 16. At the county level, Billings and Nguyendo presented their exhibit to three judges for up to 20 minutes, while at the state level McHale and Nguyendo presented to the judges. Now, after winning second place at the state level, the team will accompany the first place state winners, Brigid McCaffery and Rachel Weinberg of Bullis School, to the national NHD competition. Since two teams are selected from each state per category, the Blazers will face 99 other teams at the national competition.

According to the NHD website, over half a million students participate in the competition worldwide. Entries are submitted in the form of a research paper, exhibit, performance, documentary or website. The Blazers began working on their project back in the fall. Since then, they chose a topic related to the year's theme, gathered a variety of sources to develop their project and then created the final exhibit. "Since this year's theme is 'Turning Points in History,' we decided to do a project about the effect of the Crusades on European and Middle Eastern intellectual development," Nguyendo said. "Our conclusion was that the Crusades became a catalyst for Europe's intellectual revolution and the Middle East's intellectual degradation."

Nguyendo, who first participated in the Junior Group Documentary category in seventh grade, also took part in tenth and eleventh grade in the Senior Group Documentary category. "This year we decided to try something new by creating an exhibit," Nguyendo said. Billings participated last year as well and found the competition to be an educational and social learning experience. "NHD is an environment where my group mates and I are teaching and proving our thesis while still competing against other groups," Billings said.

The team thought the other projects were competitive as well. "I thought many of the projects at county and state level were very impressive. Many of them were physically imposing, like one group who made a six foot tall replica of the Mercury capsule with information inside of it," Nguyendo said.

After working on the project for the past several months, Billings is looking forward to the upcoming national competition. "The competition so far has been a great experience. It is awesome to be able to present to judges who are intrigued by a facet of history that you have spent months researching," she said.