Blair boys varsity basketball (0-1) came up just short in their season opener against Seneca Valley (1-0), losing by one point in an edge-of-the-seat, back-and-forth 59-58 loss. This game was both teams' return to the court after a two-year hiatus due to the pandemic.

Right from the tip-off, the home crowd was sent into a frenzy by a dunk less than ten seconds into the game by Blazer senior forward Giovanni Moore. As Seneca Valley quickly responded with a basket of their own, both teams began to settle into a back-and-forth battle.

The Screaming Eagles had a clear height advantage over the Blazer starters. This propelled them to collect offensive rebounds nearly every possession during an 8-0 run that put them ahead 15-7 midway through the first quarter.

Senior point guard Muller Torontow said the Blazers needed a different mindset to combat a team that was playing as aggressively as Seneca Valley. "We just gotta be mentally prepared. If a team's coming at us aggressive or whatever, just playing rough, we gotta be able to keep our composure and play our game, and not let it affect us," Torontow said.

A tough three launched by junior Jonathan Pang halted the Seneca Valley run and kickstarted a 6-0 run that put Blair right back in the contest to wrap up the first quarter down by two, with the score at 15-13.

The second quarter was a defensive showcase. The Blazers came out of the gate running, snatching two straight steals on Seneca Valley possessions. Throughout the second quarter, very few shots were falling for both teams as players were forced to take contested looks all around.

The second quarter concluded with a steal by Seneca Valley and a three to put them ahead. The Blazers headed to the locker rooms down by one in a 24-23 contest. 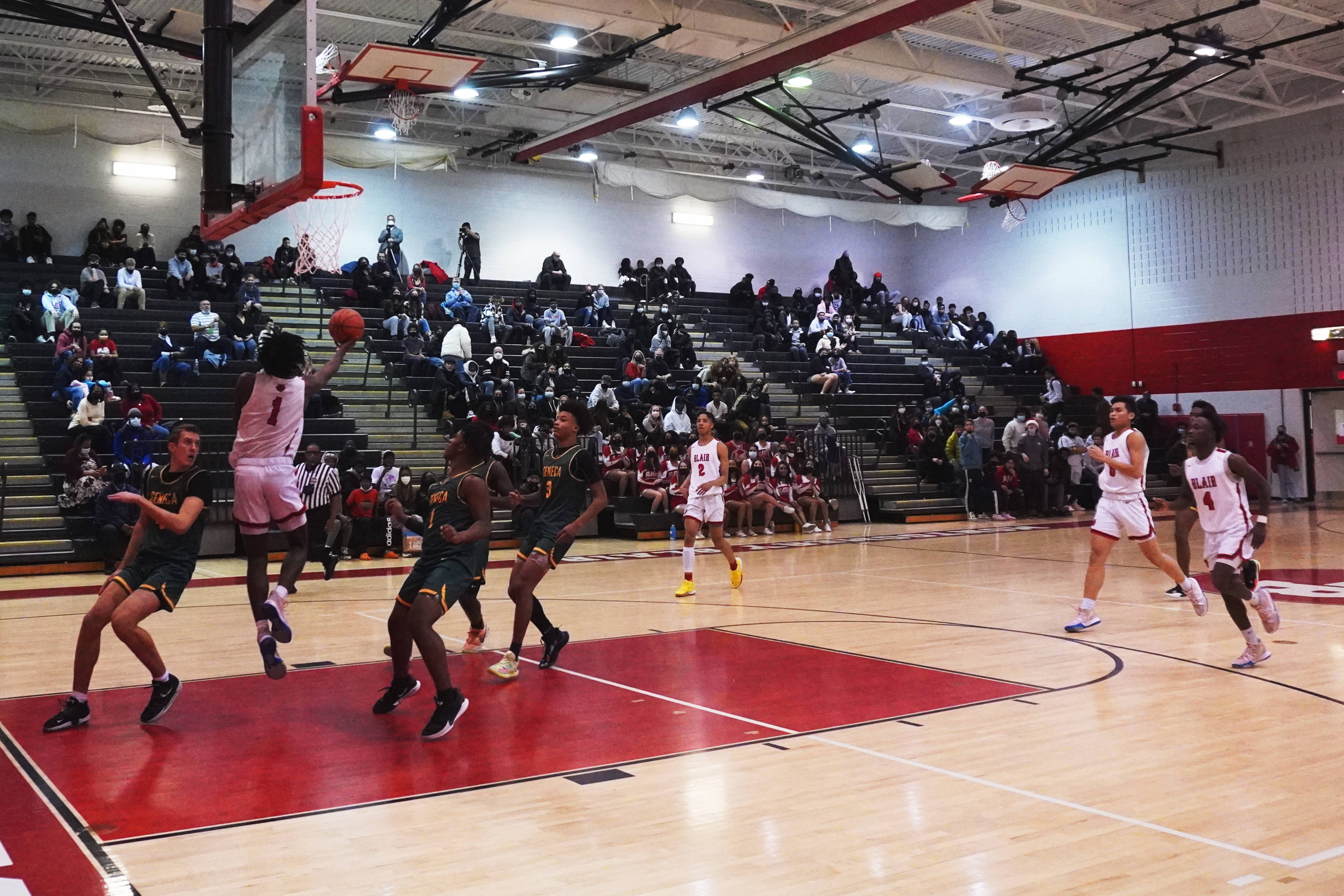 Photo: A Blazer reaches for the hoop as other players look on.

Photo: A Blazer reaches for the hoop as other players look on.

The second half began with a slow start on both sides; both teams dove for loose balls and locked down until neither team could get a good look at the basket. The scoring drought stopped when Torontow pulled up for two wide open threes and sank both of them, giving the Blazers their first points of the half. Pang then followed up Torontow's threes with one of his own, marking an unbroken 9-point scoring run.

Defensively, the Blazers' exposed the holes in Seneca’s offense and forced multiple stops, strips and swats to get the ball back on their side and shine offensively.

Seneca wasn’t letting the Blazers pull too far ahead and managed to keep themselves in the game. They ended the third quarter with a mid-range barrage to hold the Blazers to an eight-point lead, 38-42.

Seneca continued their strong defensive effort into the final quarter, but that didn’t stop Blair from having a great scoring display. In the first minutes of the fourth, Moore eurostepped his way into the paint and floated the ball into the basket, drawing a foul for a three-point play.

Seneca's rough play finally caught up to them and put Blair into bonus, allowing them to get to the line for crucial free throws in the game’s final moments. Junior guard Eli Greenberger missed two free throws with only :11 left in the game, putting the ball back into Seneca’s hands with the score at 57-58 Blair.

Blair’s lead was far from comfortable and the energy in the gym reflected the importance of this possession. Blair’s defense began their full-court press and Seneca somehow made their way through the valiant defense up to the charity stripe. They sank the dagger into Blair’s chest with :06 left in the game.

With 1.7 seconds left in the game, Blair had an inbound play on the offensive side of the court. Pang's defender was screened off him and he sprinted to the corner, open for three. Pang got the shot off in time, but the potential buzzer-beater game-winner clanged off the iron as the horn sounded.

Head coach Paul Mensah attributed the loss to Blair's inability to make plays when it mattered most. "I think knowing when you have the opportunities, you've got to execute… You've got to [execute] for 32 minutes. And I thought for stretches in the game, I thought we played well… we got an eight or nine point lead, and we executed. But down the stretch, we didn't. And that's what happens when you don't execute," he said.

But despite the final score, Coach Mensah recognized the game's significance for each player on the team. "For the kids, after two years away, I think it was special. It was a special moment for them and an opportunity to play, so that was awesome."

Blair's home game against Paint Branch on Friday, December 10 at 7PM, was canceled due to multiple COVID cases on the boys basketball program.

Sachin Parikh. Hello! I'm Sachin (he/him) and you can usually find me scrambling to meet a deadline for SCO. More »