Blazers earn the 4A Division title over the Einstein Titans

Blair continues their winning streak with another incredible victory 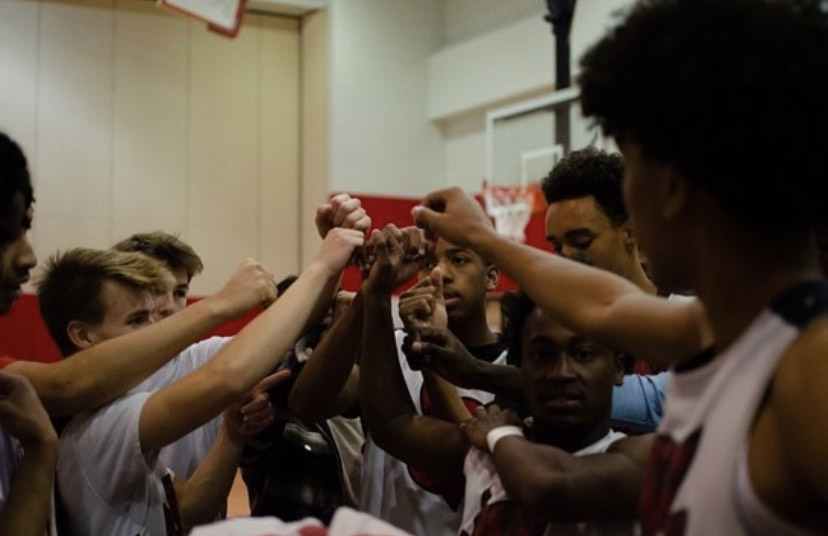 On Feb. 17, Blair (15-5) successfully turned their last regular-season home game against the Einstein Titans (10-9) into another entertaining display of talent with a score of 70-46. This crucial victory propelled Blair into the number one spot of the 4A division, making the Blazers division champs.

Even though the Blazers came out on top, their first-quarter offense was uncharacteristically sloppy. They turned the ball over three times in four possessions within the game’s first three minutes and Einstein converted all of those turnovers into easy layups.

Blair began getting into a bit of a rhythm after junior guard Eli Greenberger continued the stellar beyond the arc shooting he’s been maintaining all season with two threes in a row. However, Einstein managed to keep their lead with a buzzer-beater at the end of the quarter with a score of 11-19.

In the second quarter, Einstein started killing Blair on the board battle, winning two or more offensive rebounds on multiple possessions. Their dominance on the board was the main aspect of their game that allowed them to maintain a decent-sized lead for the entire first half.

Nonetheless, the Titans were having trouble containing senior forward Gio Moore without sending him to the line. However, after Moore converted one of his free throws, Greenberger followed with a floater that arced over three Einstein defenders. Blair was still turning over the ball too much for them to close in on the Einstein lead, and their last turnover of the half was unfortunately taken to the Titan’s side of the court for yet another buzzer-beater.

In the second half, the entire Blazer squad stepped it up a notch and shut down the Titans. Moore also managed to cement himself as the player of the game.

Moore came out of the gates with a tough and-one layup over two Einstein defenders. He got back on defense and dominantly swatted down a weak floater attempt. Einstein did get a little revenge by stuffing Moore on one shot, but it had little effect on the roll the Blazers were on.

Captain guard Muller Torontow followed Moore’s dazzling plays with a three that gave Blair their first lead. The Blazers refused to look back, and Einstein’s continued foul trouble launched them towards more and-one plays and a larger lead.

Moore made the last three of the third quarter and topped off the 15-point lead the Blazers had gained in a mere eight minutes. The Titans had lost control of the game and were heading into the quarter with a Blair lead of 55-40.

The fourth quarter was a breeze for the Blazers; the excessive fouling of the Titans put Blair into the bonus, allowing them to cushion their already-sizable lead. Greenberger and Moore contributed two threes each to finish the game.