Blazers dazzle on Senior Night in entertaining win over Whitman 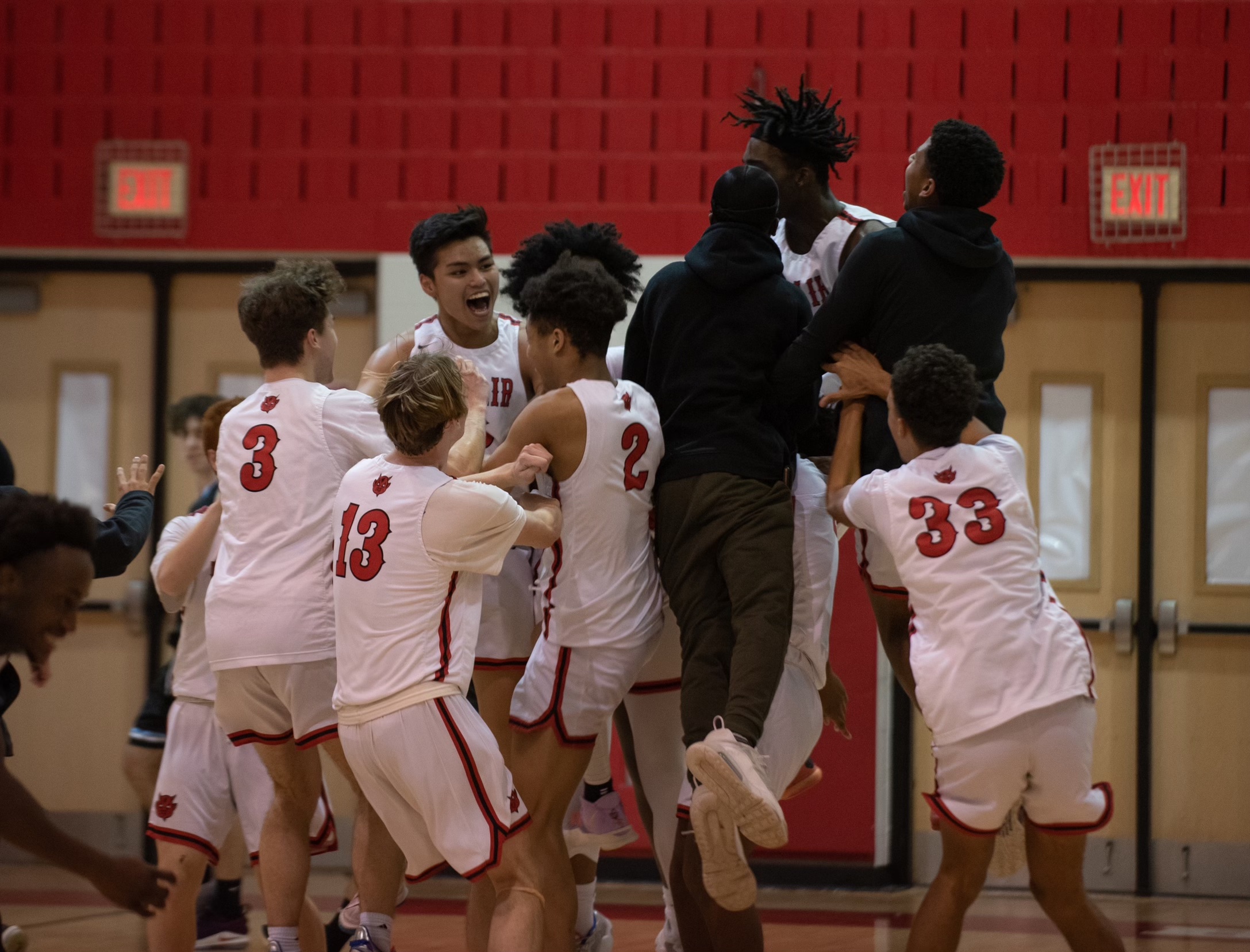 Photo: The Blazers celebrate after their Senior Night victory against the Vikings. Blair defeated Whitman 72-52.

The Blazers celebrate after their Senior Night victory against the Vikings. Blair defeated Whitman 72-52. Photo courtesy of Sam Levy.

﻿On top of a successful senior night, Blair’s boy’s varsity basketball team racked up another victory with an outstanding game against Whitman and a final score of 72-52 on Feb. 11. After a slow start in the first quarter, Blair couldn’t miss and was throwing up a plethora of threes over the Vikings defense.

Coach Mensah furiously called an early timeout to give the Blazers a chance to re-group. After a breather, Blair got right back on track with another three from Greenberger off a bounce pass from senior guard Muller Torontow, which tied the game.

Whitman’s defense in the first quarter was extremely solid and left Blair scoreless on multiple possessions. After their hustle on defense, Whitman came down to the other side of the court to add two threes onto the scoreboard.

Blair unsuccessfully attempted to replicate Whitman’s marksman-like shooting. Their missed shots allowed Whitman to go on another scoring run. Greenberger, almost single-handedly, brought Blair back into the game with contact layups and even more triples.

Even though both teams went into the second quarter with the same amount of points; it seemed that Blair wouldn’t be able to pull out a victory. However, their performance in this second completely turned the tide of the game in their favor.

Early on, star senior forward Gio Moore touched the sky for a high-flying block, and his defensive effort was immediately followed by a three from Torontow. This sequence gave Blair their first lead of the game, which also gave them the platform to run away with the game.

Moore and Torontow added onto Blair’s numerous completed field goals from beyond the arc. Whitman was forced to call a timeout to try to shake the Blair's hot hand. The timeout worked in their favor and allowed them to catch up to Blair; the first half ended with a small Blazer lead of 29-24.

For the second straight game, Blair ran away with the game in the third quarter. Similar to Thursday's game against Paint Branch, a 78-51 win, Blair's interior defense was extremely solid. They forced Whitman to make the choice between a contested shot or even more contested layup on every possession.

Continuing Thursday's success, Blair was dominant in rebounding. This allowed the Blazers to get hold of the ball on defense and quickly drive up the court to catch Whitman's defense unprepared and mismatched, creating opportunities for easy buckets.

Blair also continued shooting the ball beyond the arc with success. Every few possessions, a collective shout of "three!" erupted from the stands as enthusiastic fans put three fingers in the air while a Blazer launched a shot from deep, and more often than not, the shot splashed through the net, triggering a roar from the crowd and a classy celebration on the court. Greenberger, Moore, Torontow, and junior guard Jonathan Pang led Blair's long-range effort in the second half.

Blair's snappy passes also led to open players and mismatches in the paint where Blazer guards could drive and make layups, and forwards could muscle their way inside for two points. The third quarter ended with Blair in cruise control, up 51-37.

Blair got right back at it in the fourth quarter, with another three from Greenberger to open up the scoring. Pang followed up Greenberger's bomb with one of his own. Two minutes into the fourth, Blair was up 57-44. Coach Mensah began subbing in Blair's second rotation of players.

Whitman started putting up a run with a mix of threes and jumpshots, so Coach Mensah, playing it cautious, called a timeout and subbed back in a few starters. The Whitman run was quickly snuffed out, and the game finished with a flurry of fancy layups and mesmerizing threes from Blair.

When the horn sounded, the packed senior night crowd stormed the court as the players mobbed each other at half court, jubilantly concluding a well-deserved, well-rounded, and entertaining 72-52 victory against a very good team. Friday's game was Blair's last regular season home game of the season. The playoff schedule has yet to be announced.