On a night where they weren't playing their best, Blair boys' varsity basketball still managed to defeat Springbrook handily 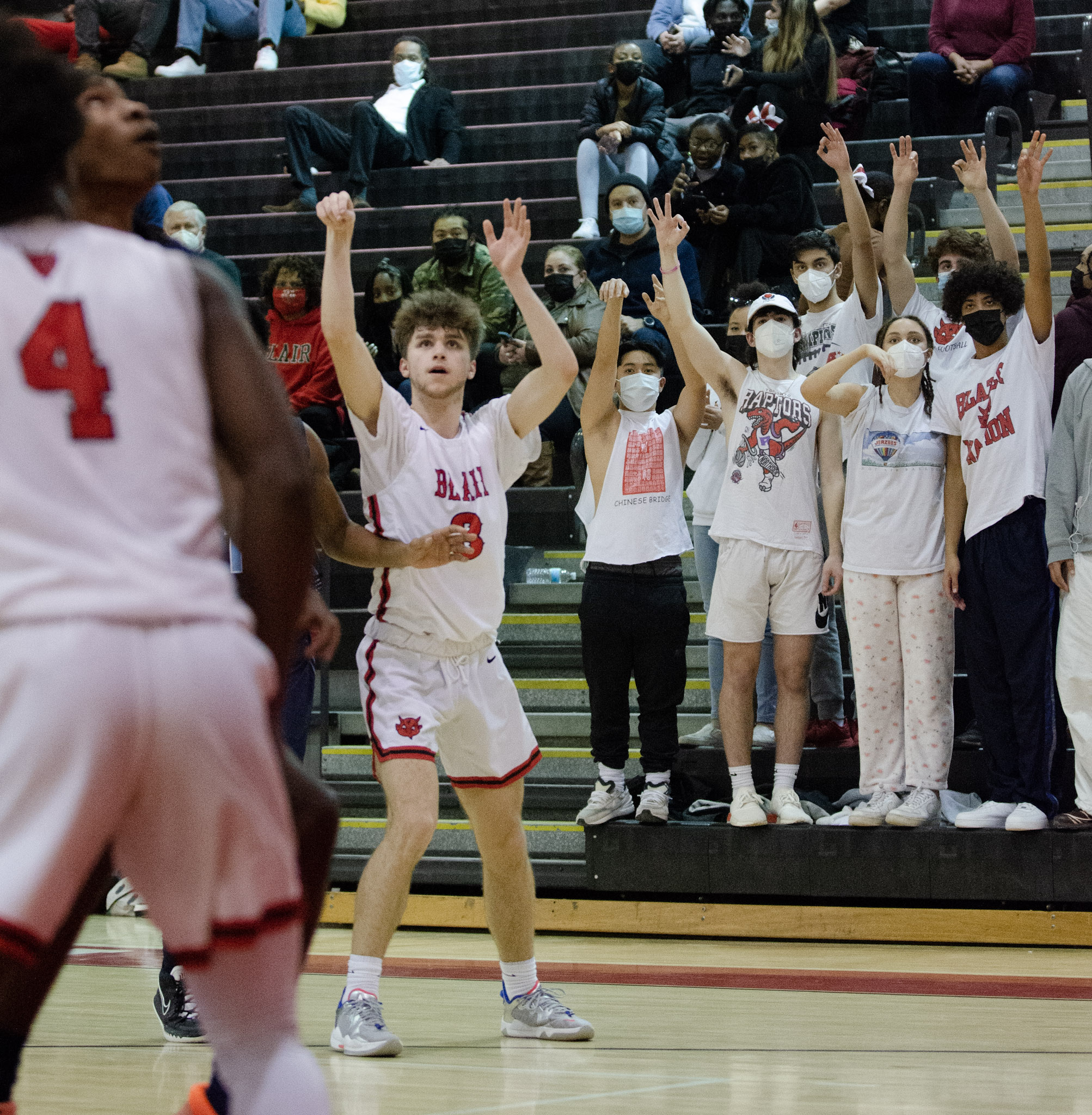 Photo: Junior guard Eli Greenberger launches a three with the Blazer Ragers and Blair fans in the background vs. Springbrook

Photo: Junior guard Eli Greenberger launches a three with the Blazer Ragers and Blair fans in the background vs. Springbrook Photo courtesy of Cal Tobias.

You know a team is on fire after they win a game by 26 points while still not playing to their full potential. Springbrook absolutely dominated the Blazers on the glass, seemingly grabbing an offensive rebound on every possession. Head coach Paul Mensah even said Blair's execution is "not where I wanted it to be." But when things didn't look promising for the Blazers, their stars picked up the reins and guided the team to yet another victory.

Senior forward Giovanni Moore put the Blazers on his back, depositing 35 points into the hoop. Moore opened the game with a corner three, immediately giving the Blazer Ragers and Blair fans packing the stands for the first time since the spike in COVID cases at Blair something to cheer about.

Head Coach Mensah attributed this to a lack of passing. "From the offensive side of the ball, we need to be more unselfish… when I say be unselfish, it means moving the ball so you get easy shots. In the first half, we weren't getting easy shots," Mensah said.

Fortunately, Blair's defense made up for what the Blazers couldn't do offensively. Their interior defense was suffocating. Springbrook's game plan was clearly focused on getting the ball into the paint, but Blair's big men, led by 6'8" senior center Yann Aubert, stifled the Springbrook offense, swatting and poking away the ball from countless Springbrook players.

Two minutes into the quarter, only five total points were on the board as Blair led 3-2 from Moore's opening three. Coach Mensah took a timeout and gave the Blazers 60 seconds to regroup.

After the break, not much changed about Blair's game. To Coach Mensah and Assistant Coach Charles' dismay, Blair was unable to take command of the defensive board. Both teams managed to cash in a handful of shots, but neither team held an edge over the other. At the end of the first quarter, Blair was ahead 13-9.

The second quarter paved the way for the Blazers the rest of the game. Blair's defense somehow became even tighter, with Springbrook handing Blair the ball seemingly every possession. The Blazers forced errant passes, made blocks, and swatted balls out of Springbrook hands. Midway through the quarter, Springbrook turned over nearly a half-dozen consecutive possessions.

On the offensive side of the ball, Blair was finally getting it together. Their tall forwards were doing their jobs and taking advantage of pass-created mismatches to shovel the ball into the bucket. A deep three by junior guard Jonathan Pang and a subsequent buzzer-beater corner three from Moore ignited the crowd and sent Blair to the locker rooms up 33-20.

The Blazers came into the second half determined to close out the game with a win. Despite the comfortable 13-point lead they sat on, they upped the ante with a much-improved offensive showcase than in the first half. Aubert showed that big men can shoot and started off with two mid-range jumpers over his defender. Senior guard Muller Torontow followed that up with a steal on one side of the court to a give-and-go on the other that led to a wide-open three.

Springbrook, down 25-42, had to get a scoring run going to make sure the Blazers didn't run off with the game with so much time left. They started playing like a solid team by communicating more, which fueled their defensive performance.

Their lockdown defense forced the Blair team into a corner and resulted in three consecutive turnovers by the Blazers. Springbrook capitalized on these turnovers and turned them into two and-one layups.

The Blue Devil offensive board performance was the most notable aspect of their game. It was those rebounds that led to an extremely rare and almost comical six-point play, which happened after Springbrook got consecutive offensive rebounds off free throws. They ended the third with back-to-back blocks at a score of 51-36.

Blair decided to close out the game with some pizzazz; they maintained a huge point deficit throughout the game and had room to show off in the fourth.

Torontow and Moore exemplified the bond they’ve built throughout this season with some all-star level highlights. Torontow used his shifty handles to stun the Devil defense, leaving Moore wide open for a three. Moore continued the high-flying display he’s been putting on all season with a menacing dunk coming off a flashy no-look pass from Torontow.

Blair finished off the game on a high note, finally sharing the ball with the unselfishness that Coach Mensah preached. The Blazers stormed ahead and didn't look back, snatching yet another blowout victory.

The Blazers' next home game is Tuesday, Feb. 8 at 5:30 pm against Wootton.