The Blazers powered through the rainy night and won their homecoming game, 52-13

On Sep. 30, the Blazers (5-0) ran a clinic against the Blake Bengals (3-2) with a final score of 52-13. A shaky first quarter was followed by tightened defense and better executed offense which accumulated to numerous touchdowns. The Blake Bengals became aware of the inevitable early into the second half when they went into full panic mode, which only made it easier for Blair to capitalize on easy scoring opportunities. 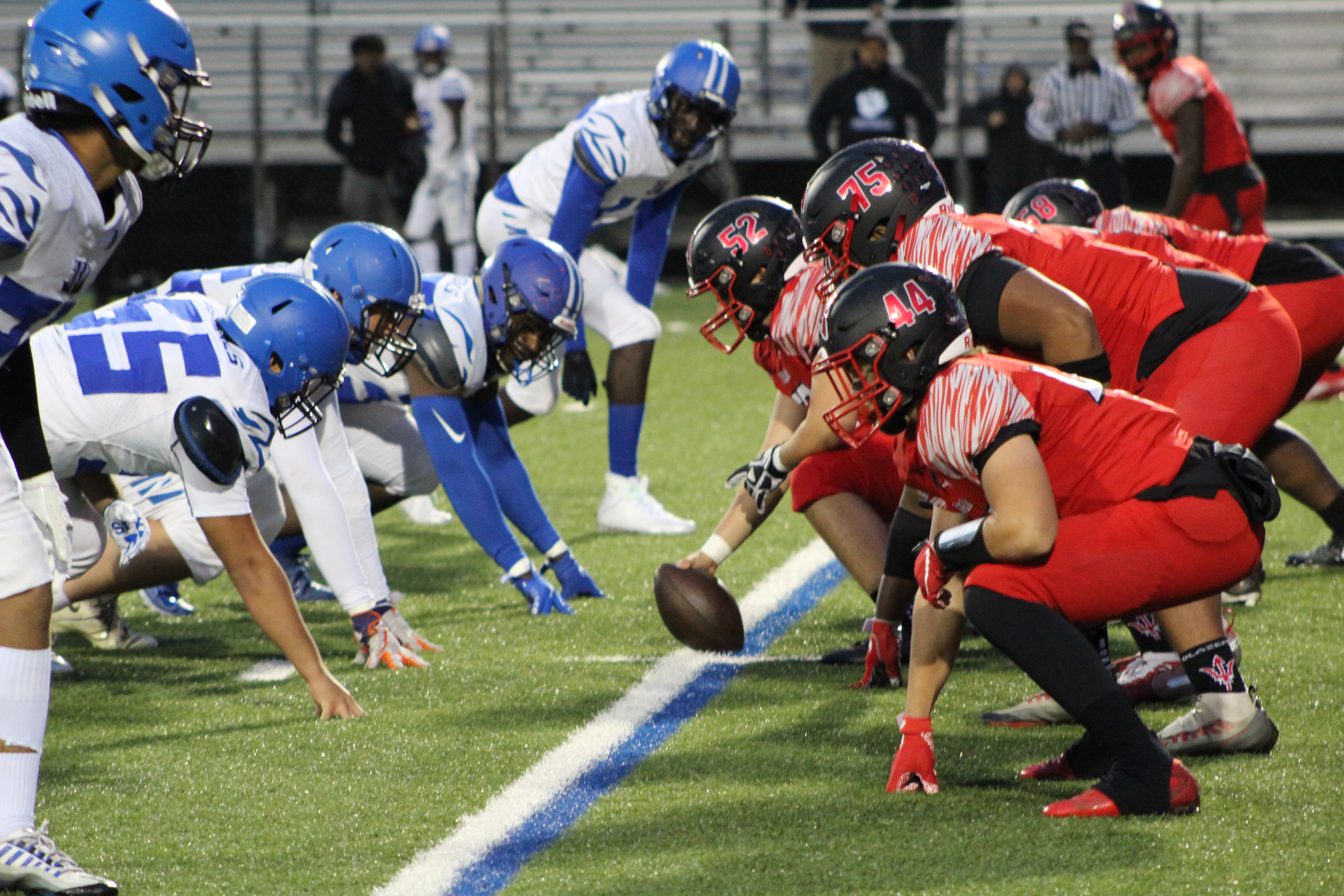 Photo: The Blazers about to start a play

The Blazers about to start a play Photo courtesy of Maggie Megosh.

The game began with Blair on defense, taking down Bengals sophomore wide receiver Joey Faunteroy early on. Consecutive dog piles led to Blair gaining possession of the ball within 2 minutes of the first quarter. Junior quarterback Quinn Stofa successfully passed to sophomore wide receiver EJ Boyd before he got fouled by a member of Blake’s defense. On the next play, with the advantage of the five yard penalty, senior running back Kam Reynolds rushed the ball 30 yards before getting tackled.

On fourth down, Stofa trucked through to the line of scrimmage to get a clutch reset to first down. A couple plays later Stofa got sacked, which he subsequently took personally to make a pass to junior wide receiver Mikhail Seiken in the endzone.

Blair started the second with another sack by sophomore defensive end Daiyan Lewis, which put the ball back in their hands again. But an unexpected turn of events where senior quarterback Kendell Anderson’s first pass was caught in the air by a member of the Bengals’ defensive squad turned into a momentum building touchdown for Blake. After they got the extra point, the score turned to 6-7. A fumble by Anderson on the next play put the ball right back into Blake’s hands. At the 7:36 mark of the second quarter Blake scored another touchdown, making the score 6-13. 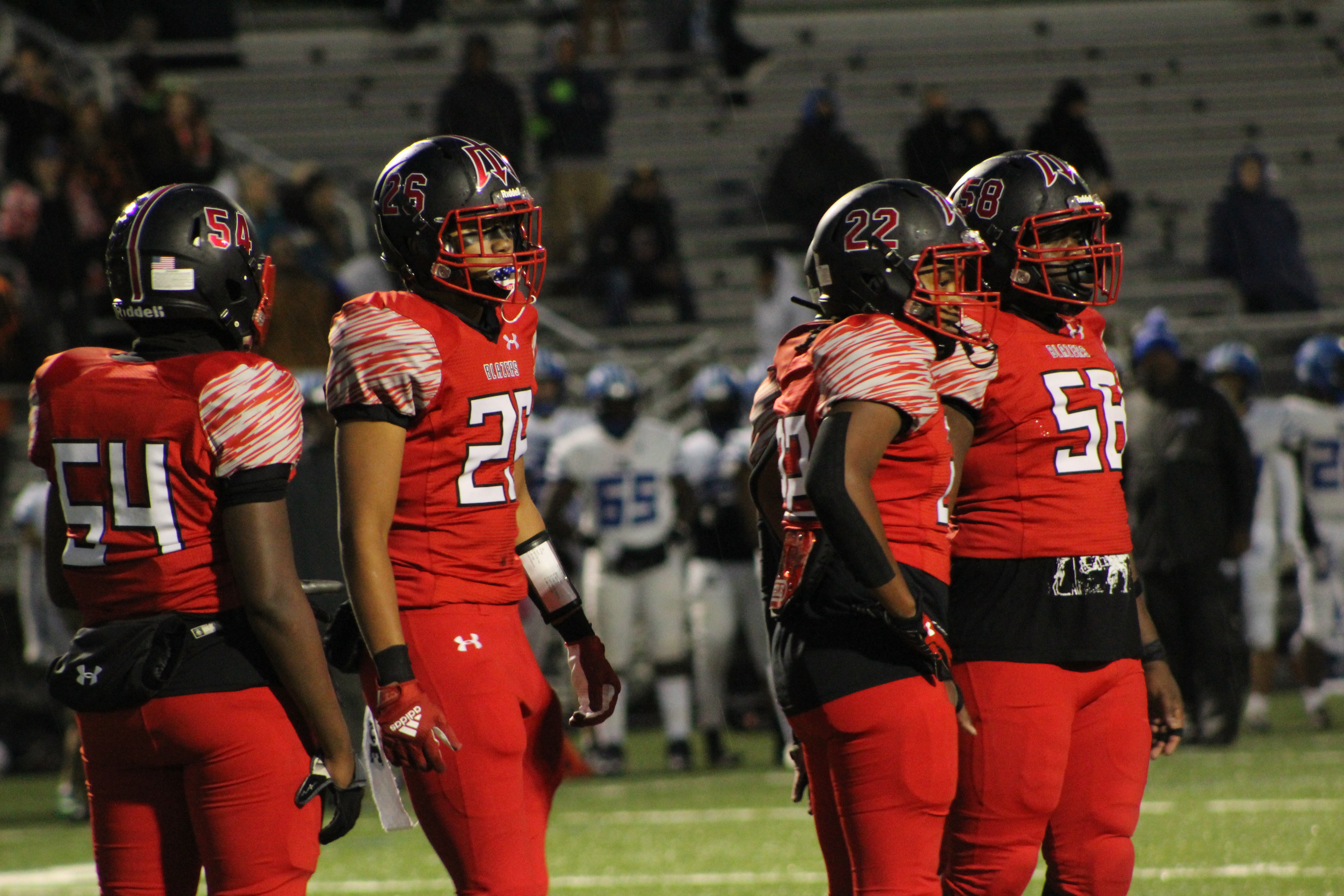 Photo: The Blazers' defensive linemen getting ready for the next play

The Blazers' defensive linemen getting ready for the next play Photo courtesy of Maggie Megosh.

With Blair on offense, they needed to make a big play. But, after Reynolds lost yardage after a smothering defensive play by Blake, the Blazers needed to rethink their offensive strategy. Instead of trying to rush the ball on every play, they started utilizing Anderson’s cannon of an arm. Three consecutive dimes by the Blazers’ star quarterback got Blair close to the end zone and back on first down. A rush by Reynolds to the 35 yard line and a subsequent killer maneuver by Anderson to evade the Bengals defense allowed him to fire a missile to senior wide receiver Aven Williams in the endzone. A successful two point conversion by Reynolds made the score 14-13 with just less than three minutes left in the first half.

Blair ended the first half with another touchdown from Anderson to Williams and a successful two-point conversion to make the score 22-13. A great showcase of the Blazers’ student section’s sportsmanship was after Blake’s junior outside linebacker Zandrew Kamara went down on the field and they put up crossed fingers as a prayer for Kamara.

Blair set out on a mission in the second half to run the ball and not look back. After a series of plays including Williams’ 15 yard catch and senior running back Tariq Taylor’s 20 yard run through the Bengals’ defense, Blair consistently surged forward towards the end zone. Eventually, Anderson handed the ball off to senior wide receiver Jamall Worrell, who then ran 20 yards for a touchdown, while stiff-arming Blake defenders along the way. Unfortunately, Anderson was unable to find a pass to the gloves of awaiting teammates, failing to score the two point conversion. With 8:35 left in the third quarter, the score was 28-13.

While the Blazers had a number of little, costly defensive mistakes in the first half, Blair’s defense team began coming together to shut down Blake in the second half. With around eight minutes left in the quarter, the Bengals struggled to move the ball down the field as their offense was continuously tackled and shut down by Blair. 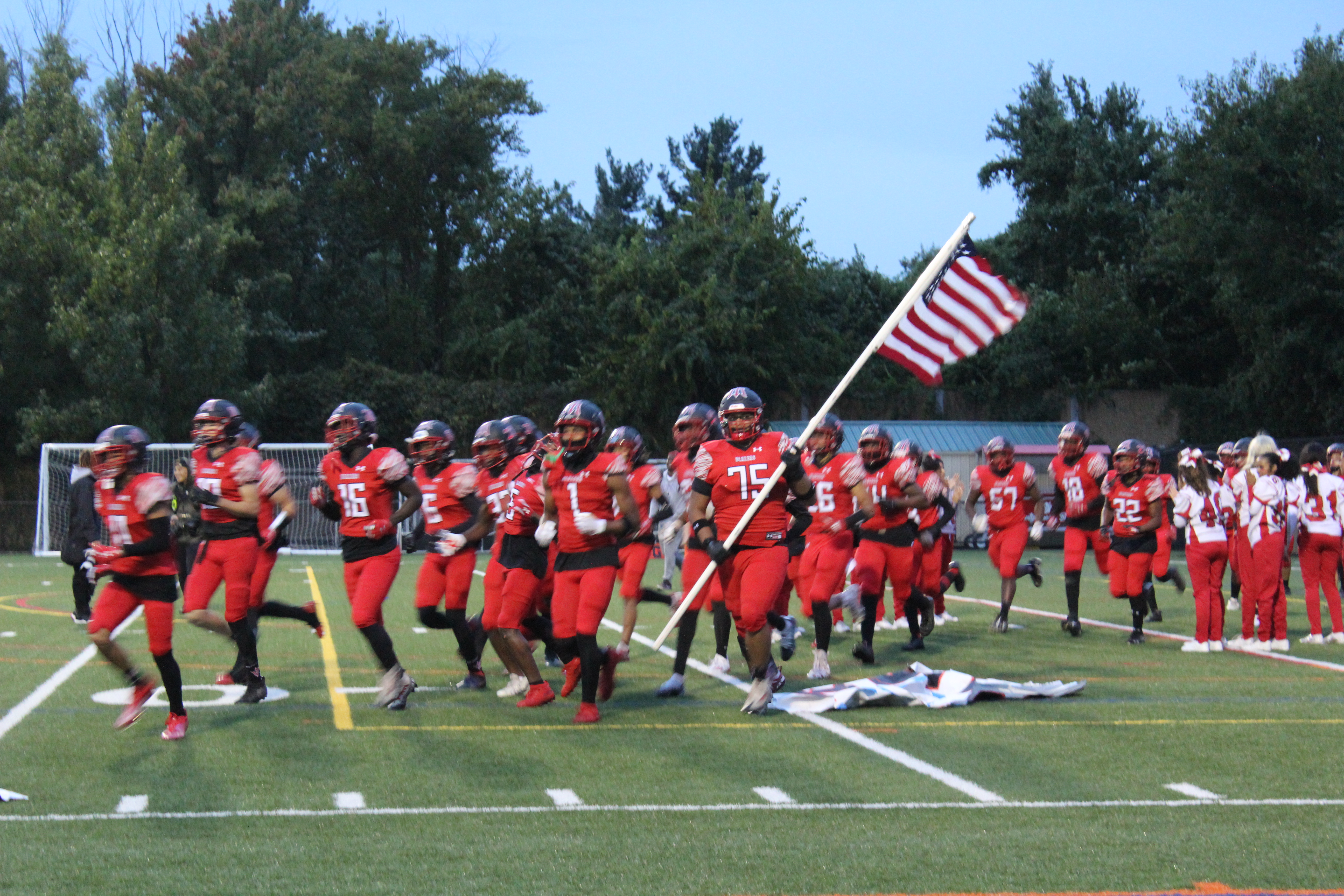 Photo: The Blazers bring in the American Flag before the start of their homecoming game

The Blazers bring in the American Flag before the start of their homecoming game Photo courtesy of Maggie Megosh.

The Blazers were on fire for the rest of the third quarter. At one point, Seiken danced around the Bengals, juking defenders left and right and running for 35 yards. Not much later, Anderson ran the ball himself for 15 yards, sliding just a few yards from the end zone. To finish off this offensive roll, Taylor forced his way through Blake defenders for a touchdown. However, Blair struggled again to score the two point conversion, leaving the score at 34-13 with 3:52 left in the quarter.

Blair continued their defensive prowess, which was highlighted when Dupree trucked Blake’s running back, who gasped to regain his breath on the ground. At this point, the Bengals were feeling the pressure of the game, as a handful of their players dropped the ball, leading the Blair crowd to chant, “Butterfingers.” Eventually, Blake punted the ball back to Blair after poor offensive plays, leaving the Blazers 60 yards from the end zone with limited time left in the quarter. However, this did not deter Blair. A few minutes later, Anderson threw a nearly 50 yard dime to Worrell for yet another touchdown. Another unsuccessful two point conversion ended the quarter with a score of 40-13.

The final quarter of the game started off slow. Blake began on offense, but failed to make any successful plays. The excitement in the game was dying down until junior outside linebacker Loic Nemlin Koffi intercepted a pass and ran 70 yards down the sideline for a touchdown. Anderson tried running the ball in for the two point conversion, but couldn’t find a gap in Blake’s defense, leaving the score at 46-13 with 9:55 left in the game.

As the game was coming to an end, junior running back Montay Wade made multiple successful runs for a total of 50 yards, that took Blair 10 yards from the end zone. Taylor then finished off the job with a run into the end zone, smacking down a Blake defender with his helmet along the way. Blair tried for an extra point, but just barely missed, resulting in a final score of 52-13.

Many of Blair’s games have had unexpected aspects to them. Whether it’s a nail biting comeback, or a surprising blowout victory, many times no one knows exactly what is going to happen. Blair head coach Samuel Nosoff spoke to how their games don’t always go as expected, but they just roll with it. “I don’t think any of our games ever go as expected at this point, so we just kind of ride all of the emotions, and we execute the game plan that we came in with,” Nosoff says.

While the Blazers finished with an overwhelming victory over the Bengals, Worrel explained how the team is both hungry for improvement, but happy with their overall performance. “Never satisfied, always feel like you could do better, but at the end of the day, 52-13 and 5-0 feels good,” Worrel says.

Blair will play the Rockville Rams next at Rockville High School. Tickets can be found here,