On senior night, Oct. 25, the Blair girls' varsity volleyball team Blazers (7-6) played a remarkably close five-set game against the Churchill Bulldogs (8-5) only to lose 2-3. In a gym packed like never before, the Blazers played with passion and fire.

Before the game, the players held a celebration for senior night, which included a senior walk-in, photos and hugs all around. During what was normally time to warm up, the senior players, along with their family and friends, walked across the gym to resounding sounds of applause in recognition for their time on the team.

Senior Ingrid Ellis felt so loved and appreciated by the underclassmen, especially by the heart-felt decorations that dotted the gym. "​​The underclassmen did such an amazing job, I honestly almost cried. The decorations . . . they did for us [were] just so amazing. I felt so appreciated," Ellis said.

With an emotional start to the night, the Blazers held nothing back in the first set. With a fierce offense, the Blazers scored with kill after kill, pulling ahead of Churchill. After calling a time-out, Churchill inched forward until the score held even. With a crowd filled with family and friends cheering them on, the Blazers played hard and won the first set 25-23 after a hit by outside hitter senior Samantha Rodriguez. 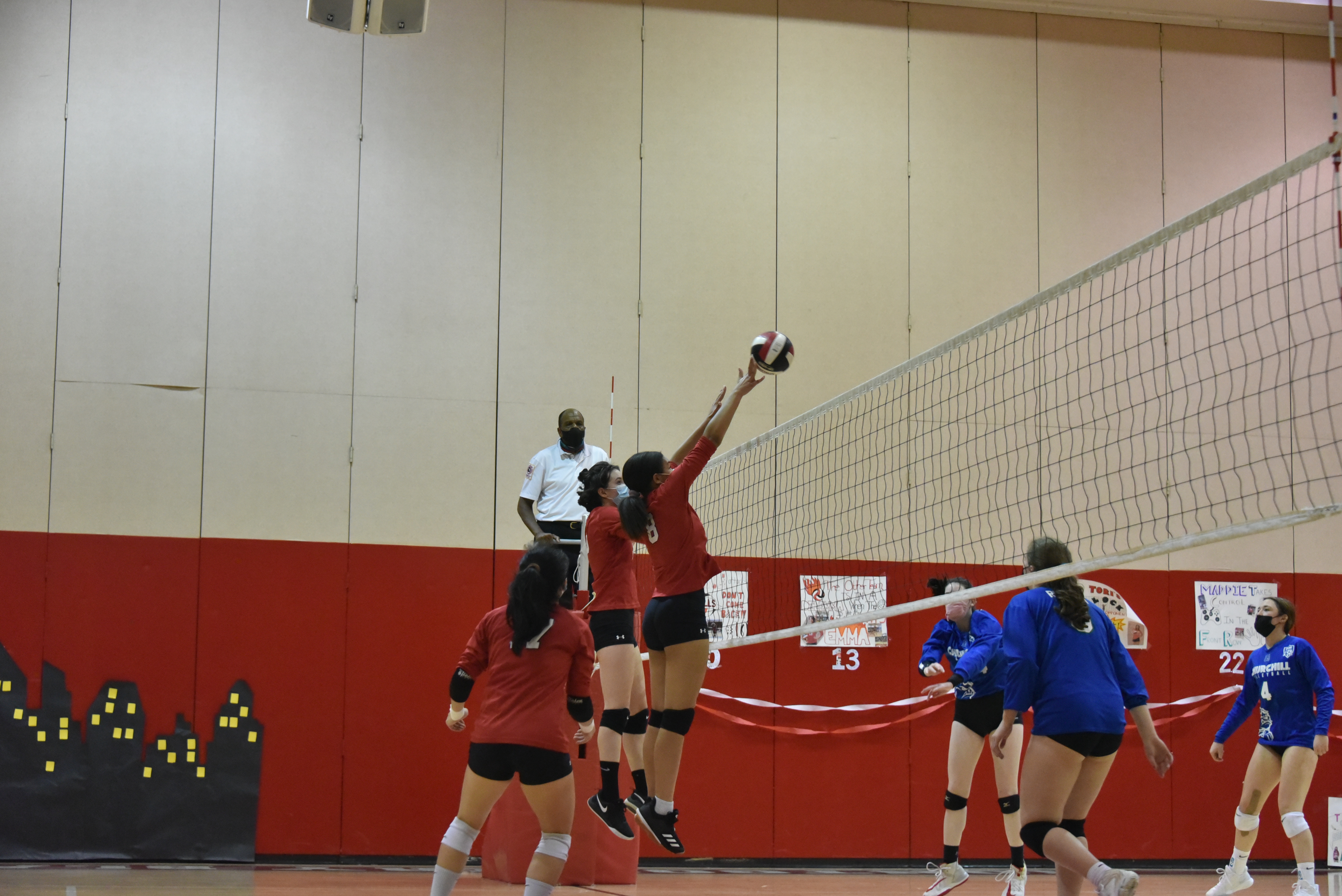 Photo: Outside hitter senior Emma Weinstein and middle blocker senior Tori Boggan jump up for a block at the net. (Photo Courtesy of Cat R)

Outside hitter senior Emma Weinstein and middle blocker senior Tori Boggan jump up for a block at the net. (Photo Courtesy of Cat R)

In the second and third sets, the Blazers kept on Churchills' heels scoring points with kills and solid blocks. Whenever the Blazers scored a point, the stands resounded in shouts and sounds of applause. The crowd's immense support kept the Blazers going. But, ultimately Churchill took both sets 21-25.

The Blazers needed to win the fourth set to pull off a victory. With serves from setter junior Celine Wu and collaboration from everyone on the court, the Blazers scored eight consecutive points. Still, the set was close. The Blazers pulled through and with a final kill from outside hitter senior Emma Weinstein, they won the set 25-20.

In a short fifth set, Churchill obtained victory 10-15 despite kills from the Blazers. Middle blocker senior Tori Boggan was pleased with how the team played. "​​I actually think I did well this time so I'm actually kind of really happy. I'm proud. I'm proud of how I played and I'm proud of how my teammates played, " Boggan said.

Despite the loss, Ellis along with all the other graduating seniors, still found the night meaningful and rewarding. "Even though we didn't win this game . . . I definitely feel the love," Ellis said.

Of course, planning and executing senior night required the cooperation of both administration and parents. Administrator Tracy Pettis-Jones and Athletic Director Rita Boule attended the game to coordinate and support the Blazers. Coach Deanna Earle thanked all the parents for their unequivocal support. "I just want to give a special shout out to the parents and the family members for senior night. The junior parents did a great job helping facilitate getting this done, and the senior parents for their patience over these four years. Their babies are graduating, and they were kind enough to donate their kids to our program for four years and I'm really honored," Earle said.