Blair’s Varsity Girls’ Basketball team (13-8) lost to the Whitman Vikings (12-9) in a close game on Friday night. The two teams kept the game close, but the Vikings ultimately pulled through in the fourth quarter.

The Blazers started the night off ahead, using some trickery and good footwork to fool the Whitman defense. The Vikings however tied the score near the end of the quarter with swift passing. The first quarter ended with a score of 9-7 in favor of Whitman following a buzzer beater from the Vikings.

The Blazers pulled ahead again in the second quarter, getting into a rhythm as senior guard Kate Hildebrant scored five consecutive points. The Vikings, in an attempt to catch up, repeatedly stole the ball and hastily took three pointers. The Blazers were able to get the defensive rebounds. "We knew they were strong shooters, so we knew we had to get out on them and be sure to close out on the shooters. I think we did a pretty decent job of getting and covering each other," senior captain Lucy Martin says. Blair subsequently began to go on a 7-0 run to close the half ahead, 25-19. 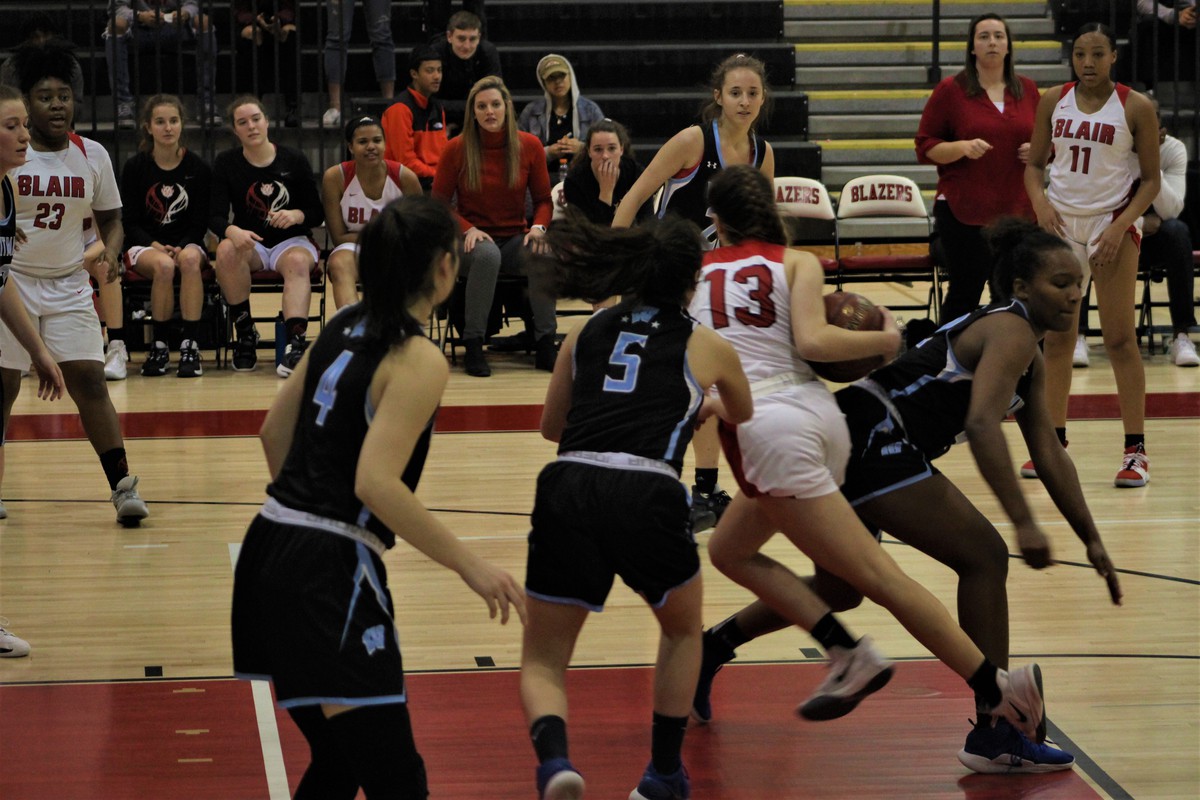 Photo: The Blazers lose to the Vikings by a score of 50-45

Photo: The Blazers lose to the Vikings by a score of 50-45 Photo courtesy of Yuri Kim.

The teams struggled for possession of the ball, but Whitman ultimately scored another layup and a free throw with 38 seconds left in the game. After a time out, senior captain Lucy Martin was unable to execute a set play, failing to throw the ball far enough across the court to tie the score. "It's something we've been practicing during practice, but unfortunately I didn't throw [the ball] far enough. The other team got the ball, which is a really bad turnover at the end of the game. We actually managed to get it back, and get 2 points with 20 seconds, so that was really good," Martin says.

Regardless of the loss, the Blazers felt proud of their playing as a whole and are looking forward to tackling their next opponents at playoffs. "This game we really pulled together and worked as a team. I think we're all excited for playoffs. We can definitely improve our communication on the court, and we need to just keep pushing till the end and not give up dumb points on the court," Hildebrant says.

The Blazers will play their next home game on Friday, February 28th against the Springbrook Blue Devils at 7:15 p.m.

Yuri Kim. Hey, I'm Yuri and I'm a senior :) When I'm not on SCO, I'm listening to music, overusing emojis, and/or working on another strange arts-and-crafts project. More »