Despite a strong comeback in the second half, the Blazers were defeated in the end

Blair's varsity girls basketball team (4-5) lost to the Sherwood Warriors (8-1) with a final score of 46-51 on Friday night. Following a tied score at the end of the fourth quarter, overtime saw the Warriors edge out in front.

The game got off to a slow start with strong defense from both teams. Sherwood scored the first point of the match with a successful free throw. The Blazers responded with a two-pointer, but the Warriors' quick interception and successive basket forced Blair to lose their lead. Sophomore guard Kate Hildebrandt skillfully evaded Sherwood's defense and scored another basket for the Blazers. Following a foul on Blair's part, Sherwood made another free throw to even up the score at 4-4. The Blazers failed to hold back Sherwood's two successive baskets to close the first quarter behind 4-8.

The Blazers fell back even further during the second quarter and faced a 13-point deficit. Multiple failed shots and free throws by the Blazers kept them behind, while the Warriors scored a three-pointer and three two-pointers. After Sherwood called a time-out, a basket each by the Warriors and the Blazers made the score 6-19.

During the second half, the Blazers were charged with energy and made a huge comeback. Baskets by senior captain and guard Megan Burke, junior guard Zoe Abramson and junior forward Lucy Martin helped the Blazers narrow the deficit to 21-25. 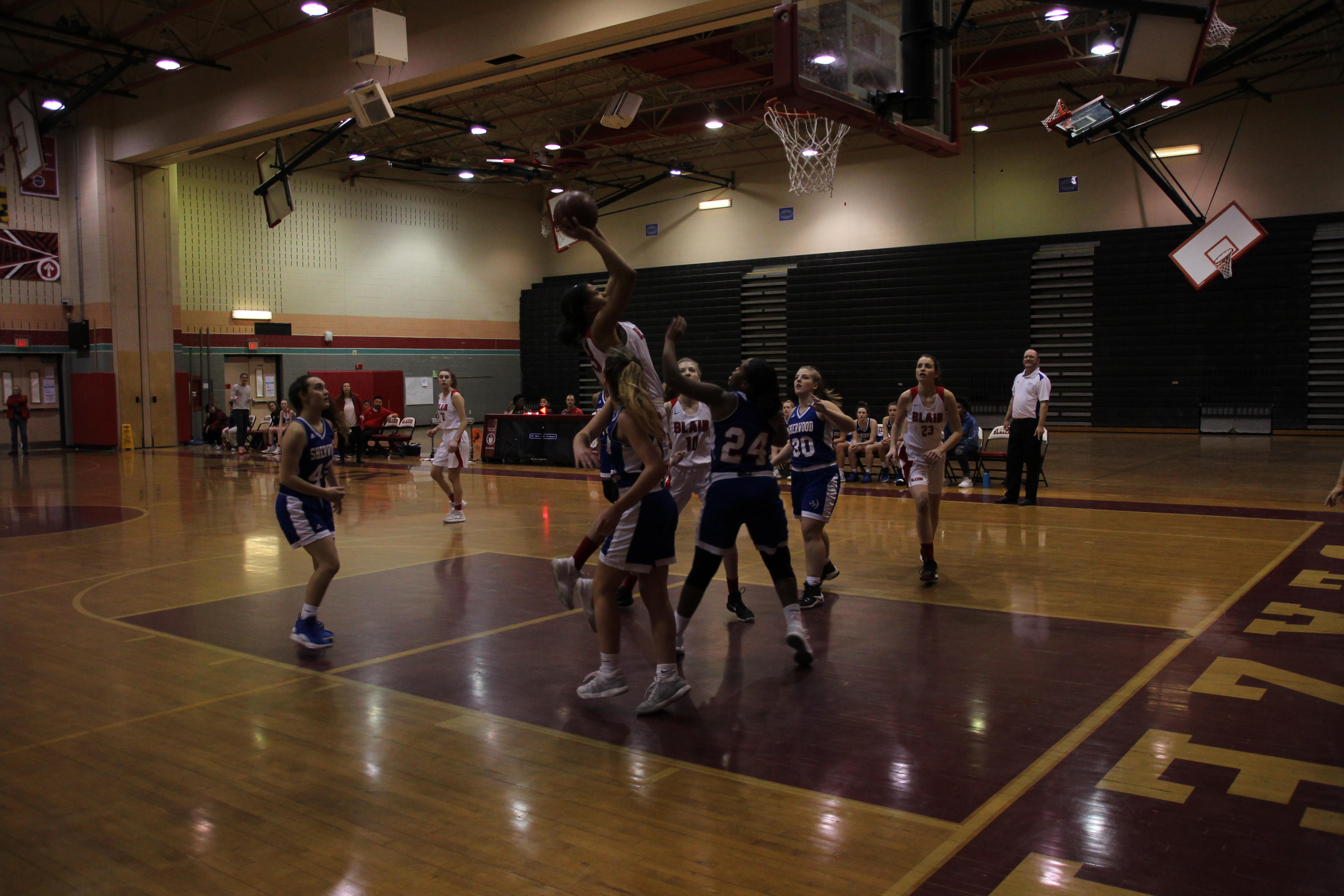 A successful free throw by Blair and a basket by junior guard Janie Pitner all but eliminated Sherwood's earlier lead. The Sherwood coach called another time-out as the Warriors kept failing to score. When the game restarted, Martin and Pitner each scored, tying the score up. Then, Sherwood fouled Hildebrant, who made both free throws to give Blair a lead of 30-28. The Blazers were able to hold off Sherwood's offense until the final seconds of the third quarter, when Sherwood scored a three-pointer to end the quarter at 31-30.

Both teams struggled to take the lead during the fourth quarter. After Sherwood scored another three-pointer, Martin scored a basket and a free throw. Another basket and a free throw for both teams kept the score close with the Blazers down 36-37. The two teams matched each other goal-for-goal, leaving the score at 41-41 with less than three minutes left to the match.

A two-pointer scored by Lucy Martin helped Blair take the lead 43-41 with only 27 seconds left to the match. The Blazers fouled the Warriors, letting their opponents score a free throw. With 14 seconds left, the Blazers committed another foul, giving Sherwood two additional free throw opportunities. After they made the first one to tie the score at 43-43, Blair coach Amy Ferguson called a time-out. The Warriors missed the second free throw, forcing the game to go into a fifth period.

Sherwood took possession first and scored, but a basket and successful free throw by Martin helped Blair take the lead 46-45. Continued fouls on both teams' parts helped Sherwood take the lead 49-46, especially when the Blazers failed to make their free throws. In the last seven seconds of the game, Sherwood scored a final two-pointer and solidified their lead 51-46.

Despite a tough first half, the Blazers put their best foot forward to tie the score at the end of the second half. Unfortunately, the Warriors managed to come out on top by the end the match.

The Blazers will play their next home game on Friday, January 25th against the Whitman Vikings at 5:30 p.m.

Emmy Song. Hi! I'm Emmy and I'm a senior at Blair. When I'm not working on SCO, I can be found solving math problems, curating Spotify playlists, or watching the sun set. More »