Magruder steals a one point victory, 45-44

The Blair Blazers (10-5) lost to the Magruder Colonels (5-12) 45-44 in the final seconds of Tuesday's girls basketball game. Blair got off to a great start, earning a 27-8 lead through superior physicality and rebounding in the first half, but numerous turnovers in the second half let the Colonels back into the game.

Junior center Nora Olagbaju opened the scoring thirty seconds in with a low post layup, quickly making use of her size advantage. Magruder came back with a mid range two, which would be the team's only basket in the first quarter. Blair went on a 14-0 scoring run with scores by junior guard Saraswati Temple, Olagbaju, and senior forward Lauren Frost. Senior guard Allison Mackenzie also contributed a steal, and the team had six offensive rebounds.

Early in the second quarter, Magruder ended its scoring drought with a long two. Mackenzie logged another steal and turned it into fast break points. The Blazers defense was less dominant and aggressive than it had been in the first, but thanks to poor shooting by both teams and impressive rebounding by Olagbaju and Frost, Blair maintained a 27-8 lead going into the third quarter.

For the duration of the first half, Blair's bigs were too much for the Colonels to contend with, gobbling up boards on both the offensive and defensive glass and scoring on putbacks and backdowns on the low post. Neither team was hitting much from distance, allowing the Blazers to thrive with their hard-nosed, physical approach. 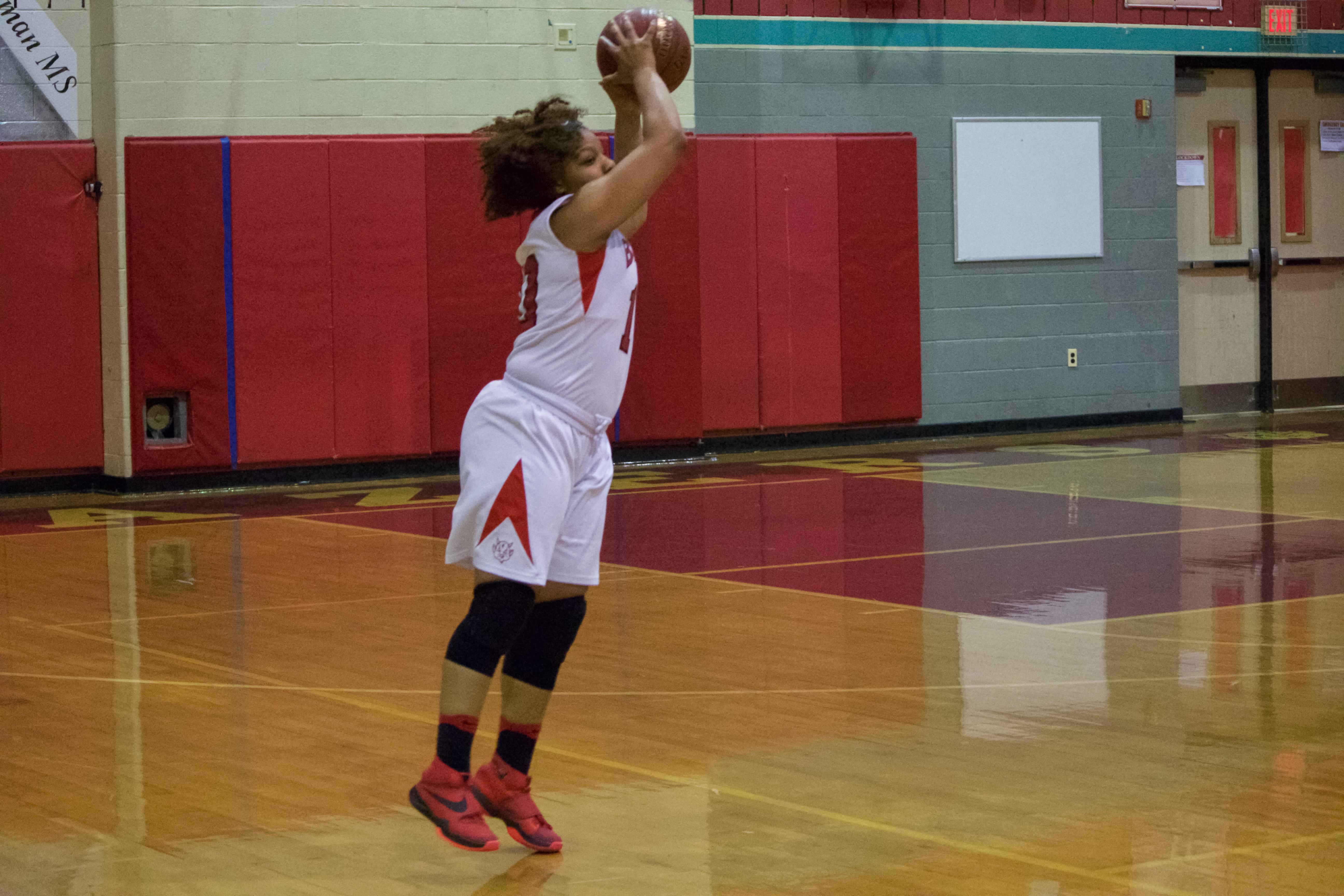 Photo: Sara Temple made a big impact in the matchup with Magruder.

Photo: Sara Temple made a big impact in the matchup with Magruder. Photo courtesy of Abigail Landesman.

Magruder opened the second half in a half court press, putting more pressure on the Blair ball handlers. The Blazers offense struggled as a result, missing several shots and allowing fast break points off of several turnovers. The only scoring by Blair came from Temple, who earned a pair of steals and six points, two from the free throw line. The Colonels got hot from three, hitting several contested shots and cutting the lead to five.

In the fourth quarter, Magruder came out with a full court press. Blair had struggles inbounding the ball, and turned it over several times again, leading to easy layups for the opposition. Neither team was able to convert on free throws, and with a quicker pace and a plethora of fouls, Blair was unable to maintain its presence in the low block. Temple, the game's leading scorer to that point, also fouled out. The game remained close to the very end, when Magruder nailed back to back contested threes to go ahead by one. The game ended 45-44, Magruder.

According to Mackenzie, the team opened the game strong but slowed down towards the end. "We played a good first half, we started out really strong, and we also played really good defense in the first half. We need to work on keeping up the intensity throughout the game, and not crumbling under pressure," explained Mackenzie.

The next game for the Blazers is on Friday at 7:15. They will be playing away against the Kennedy Cavaliers (4-11).

Lauren Frost is the entertainment editor for Silver Chips Online